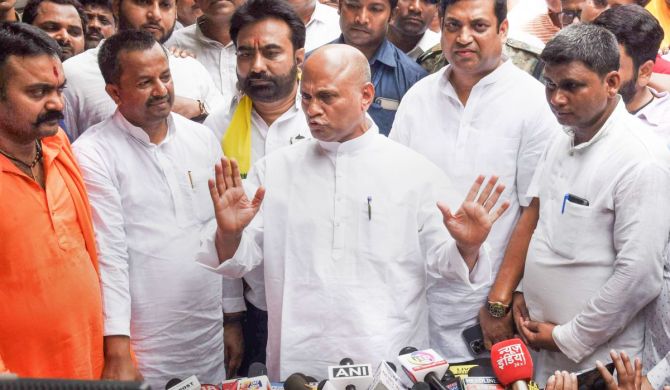 Former Union minister Ram Chandra Prasad Singh on Saturday, August, quit the Janata Dal-United, a party which he had once headed, exactly a month after he resigned from the Union Cabinet as India's steel minister after the JD-U denied him a Rajya Sabha nomination.

Singh resigned from the JD-U soon after the JD-U sought an explanation from him over allegations of corruption.

'The allegations are a conspiracy by those who envied my getting inducted into the Union Cabinet,' Singh told a meeting in Bihar's Nalanda district. 'I would like to tell them that those living in glass houses must not hurl stones at others. I also hereby give up my primary membership of the party.'

Singh, a former IAS officer, was once considered a confidant of Bihar Chief Minister and JD-U supremo Nitish Kumar. His troubles began after he reportedly become close to Bharatiya Janata Party leaders, leading to his appointment to the Union Cabinet in July 2021.

Within the JD-U, Singh's proximity to the BJP was seen as harmful for the JD-U and Nitish Kumar's government.

Nitish Kumar and R C P Singh both belong to the Kurmi caste.

The JD-U reportedly issued a show cause notice to Singh over alleged discrepancies in immovable properties registered between 2013 and 2022 in his name and his family. He had been asked to explain about it to the party at the earliest.

The JD-U has become probably the first party in recent years to target its own senior leader for corruption. The party accused Singh of amassing vast property, but not declaring it in his Rajya Sabha election affidavits.

As per reports, Singh had purchased 58 plots of land, most of them in the name of his wife Girija Singh and daughters Lipi Singh (an IPS officer) and Lata Singh (an advocate).

Both unnamed JD-U workers alleged that Singh purchased 40 bighas of land in the names of his wife and daughters in two blocks of Asthawan and Islampur in Nalanda district.

The 63-year-old R C P Singh's rise in politics, after he sought voluntary retirement from the IAS, UP cadre, in 2010 and joined the JD-U, has been remarkable. He was rewarded by Nitish Kumar who nominated him to the Rajya Sabha the same year.

R C P Singh is known for his networking and organisational skills and it is said the JD-U's financial management was completely under his control till 2020.

Nitish Kumar is a sharp practitioner of realpolitik, which is reflected in the fact that with a mere 45 JD-U MLAs he heads the government in Bihar, and his ally, the BJP, the single largest party in the state assembly with 75 MLAs, supports him.

Despite the uncertainty in the BJP-JD-U relationship, BJP national President Jagat Prakash Nadda and his predecessor Amit Anilchandra Shah during their visit to Patna announced that their party would contest the 2024 Lok Sabha and 2025 Bihar assembly elections together with the JD-U.