Spent 5 days every Diwali in jungle to reflect on life: PM 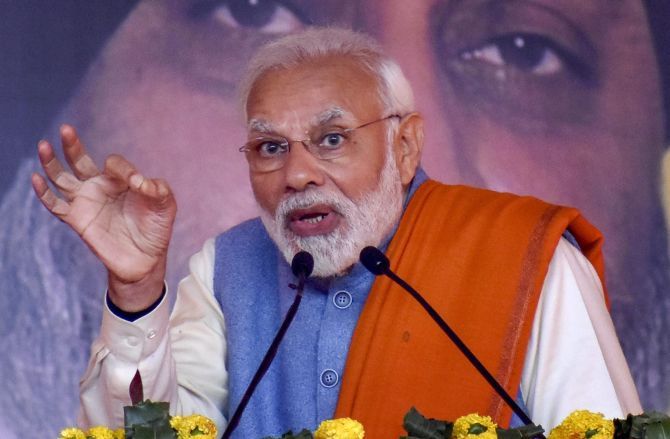 Prime Minister Narendra Modi has revealed that he used to spend five days every Diwali in a jungle and introspect during his formative years, a practice that still gives him strength to handle life and its various experiences.

During an interview to Facebook page 'Humans of Bombay', he offered glimpses of his life as a youth and his spiritual journey to find the purpose of life.

"Not many people know this, but I would go away for the five days every Diwali. Somewhere in a jungle, a place with only clean water and no people.

"I would pack enough food to last for those five days. There would be no radio or newspapers, and during that time, there was no TV or internet anyway," Modi said.

According to its website, 'Humans of Bombay' is a team of story-tellers that concentrates on the journey of individuals, showing its followers that each and every person is unique, inspirational, and relatable.

"I would reflect and -- the strength that this alone time gave me still helps me to handle life and its various experiences," Modi said.

Modi also appealed to people, especially youngsters, to take some time off in midst of their fast-paced life for thinking and introspection.

"This will change your perception you will understand your inner self better. You will start living in the true sense of the word. It will also make you more confident and undeterred by what others say about you. All of these things will help you in times to come," he said.

"I just want each and every one of you to remember that you are special and that you don't have to look outside for the light...it's already within you."

The prime minister also recalled his sojourn in the Himalayas for two years as a 17-year-old.

He said he went wherever God wanted to take him.

"It was an undecided period of my life but (it) still gave me so many answers. I sought to understand the world, to understand myself. I travelled far and wide, spent time at the Ramkrishna Mission, met sadhus and saints, stayed with them and began a discovery, inwards. I moved from place to place -- I had no roof above my head, but still never felt more at home," he said.

Talking about his schedule in those days, Modi said he used to wake up during 'Brahma Mahurat', between 3 and 3:45 am, and bathe in the freezing waters of the Himalayas but still felt the warmth.

"I learnt that peace, oneness and Dhyan can be found, even in the simple sound of a waterfall. The sadhus I lived with taught me to align myself with the rhythm of the Universe..

"So that's what I did -- I aligned and experienced revelations that help me till today," he said, adding that he realised that everyone is tied down by one's own thoughts and limitations.

Modi said when one surrenders and stands in front of the vastness then he realises that he is a small part of a large universe.

Talking about the internal change in his life, he said, "When you understand that, any trace of arrogance you have in you melts and then life truly begins. That's when it all changed. After two years, I returned home with clarity and a guiding force to lead the way."

Modi also recalled that while working with his father at a tea stall at a railway station, he would look forward to meeting people from across the country.

"I would serve them tea and listen to their stories that's how I learnt to speak Hindi. I would hear some traders speak about 'Bambai' (Mumbai) and wonder, 'Will I ever get to see the city of dreams?"