Because of the reluctance to intervene structurally in the political economy of onion trade, the BJP is paying the price till today and might continue to do so in the forthcoming election to the Delhi assembly. Aditi Phadnis and Rajesh Bhayani report. 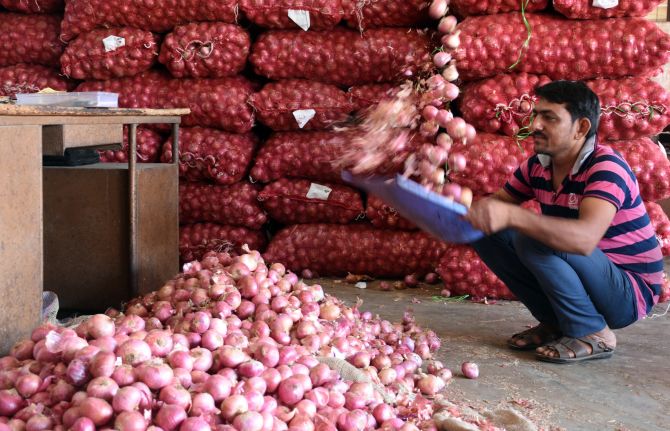 It was October 11, 1998. Sushma Swaraj of the Bharatiya Janata Party had been made the chief minister of Delhi, replacing Sahib Singh Verma.

The war between Verma and the BJP's unchallenged warlord in Delhi for years, Madan Lal Khurana, had spilt out into the open and Swaraj was brought in to tamp down the fires, even though her area of influence wasn't Delhi at all, but Haryana.

The country was gearing up for Diwali and the price of onions had touched Rs 60 a kg.

The first decision of the Delhi cabinet under Swaraj on October 12 was to recommend to the Centre that it allow the import of onions under Open General Licence and waive import duty.

The decision didn't help the BJP. Swaraj was the chief minister for just 52 days.

The Congress under Sheila Dikshit stormed to victory in the ensuing election and could not be dislodged from power for the next 15 years.

It would not be wrong to say that because of the reluctance to intervene structurally in the political economy of onion trade, the BJP is paying the price till today, and might continue to do so in the forthcoming election to the Delhi assembly.

After the change of government in Delhi, the price of onions dropped to a low of Rs 10 per kg.

Again, in 2010, apparently due to unseasonal and excessive rainfall in onion-producing regions, such as Maharashtra and Karnataka (and of course, due to hoarding), the supply of onions to Delhi plummeted, escalating the prices from Rs 35 per kg to Rs 88 per kg.

The Congress narrowly managed to retain power, in the face of tremendous opposition.

Onions and Delhi have a love-hate relationship, especially in September-October.

The reason for this lies hundreds of kilometres away, in India's largest onion mandi, Lasalgaon in Nasik district of Maharashtra.

In its heyday (2017-18), Maharashtra grew 38 per cent of all onions produced in India, followed by Madhya Pradesh, Karnataka, and Bihar.

But Lasalgaon is where all onion marketing and pricing decisions are taken.

In Lasalgaon in January 2019, onion prices were Rs 5 per kg, some farmers having to sell at even lower prices.

This was not a sudden development. Onion acreage has been rising systematically: In the last five years, onion production has increased 24 per cent to 23.5 million tonnes in 2018-19.

This is mainly because of a systematic intervention by the National Horticulture Research and Development Foundation (NHRDF), which took the initiative to distribute onion seeds in states where soil conditions are conducive for growing onions.

After all, everyone, all over India eats onions!

When production increases, prices drop. The roots of the present crisis lie in January 2019.

Kharif, late kharif, and rabi are three main sowing seasons for onion farming, but a fourth of all onions are grown in rabi season. With well-developed storage facilities in Maharashtra, the rabi crop was feeding markets in the lean season of July-August until kharif onions arrived.

When Maharashtra farmers found in January 2019 that they were unable even to cover the cost of production, they gave up the struggle and opted to plant other crops in the rabi season.

Besides, the drought in Maharashtra took its toll on agriculture and onions were no exception.

From its share of 38 per cent all India supply of onions, Maharashtra saw a sudden and precipitous fall in onion output in 2018-19 to 34 per cent.

Karnataka also saw an 11 per cent fall in onion output, though the countrywide crop was up 0.95 per cent largely due to an increase in production in other states.

Suddenly, there were no onions in the market and alarm bells began ringing in the government.

The first to take action was the minister for consumer affairs, Ram Vilas Paswan.

He announced that anyone found exporting onions below the minimum export price to Bangladesh and Sri Lanka would be punished severely and made it clear that the government knew traders were hoarding onions.

It was obviously beyond his remit to announce changes in the system of onion trading in states.

Government outlets, such as Mother Dairy, Nafed and Markfed, have been ordered to sell onions at a price not exceeding Rs 24 a kg.

Like the last time, it is plausible that onion outlets will be opened near BJP offices.

"The kharif crop of onion from Karnataka has already started arriving in the market and this will ease the pressure on supply from Maharashtra, as well as prices in adjoining regions," says the government.

But it notes, in a redux of previous events: "There is sufficient stock of onions in Maharashtra to meet the current demand. However, supplies are seemingly being restrained to increase prices.

"The government is taking all measures to improve these supplies... to mitigate any such shortfall in availability and will also consider imposing stock limit if prices do not moderate on account of speculative behaviour of traders."

This is, of course, a reference to market manipulation.

"The MMTC has also been directed to float a tender for import of onions to meet any shortfall in availability," Paswan announced.

At the time of writing, two things were obvious: The retail price of onions in Delhi was not going down, but it wasn't going up either; the BJP wanted early elections in Delhi (otherwise due early next year) to make political use of the sentiment after dilution of Article 370.

But, only if the price of onions could be controlled.