Why judiciary is often a terror target 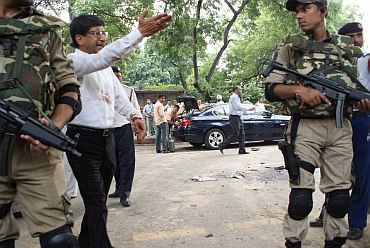 Wednesday's high-intensity blast outside the Delhi high court, which killed 12 innocents and injured scores others, is not the first occasion when the judiciary has been under terror attack, says senior analyst B Raman.

Thirteen persons were killed in seven well-synchronised explosions near the court premises in three cities of Uttar Pradesh -- Lucknow, Varanasi and Faizabad -- on the afternoon of November 23, 2007.

The explosions came in the wake of the judgments delivered in respect of the Mumbai serial blasts of March 1993, and the Coimbatore serial blasts of February 1998. In both the cases, a number of jihadi terrorists had been found guilty and sentenced to various terms of imprisonment.

The explosions also came after the arrest of three suspected members of the Jaish-e-Mohammed in UP, who were alleged to have planned to kidnap a dignitary in order to secure the release of Afzal Guru, who has been sentenced to death for his role in the attack on Parliament in December 2001.

The arrested JeM terrorists were alleged to have been beaten up by some lawyers when they were brought to court. The local lawyers had also reportedly refused to defend terrorists in future.

An email message purported to be from the Indian Mujahideen received by some TV channels before the explosions indicated that these explosions were about to take place.

The message referred to the severe penalties awarded to the accused in the Mumbai blasts of March 1993, and the lack of action against Hindu police officers who had committed atrocities on Muslims.

It also referred to the Gujarat riots of 2002 and the assault on arrested JeM suspects by some lawyers. The message, which the sender sought to convey, was that the Indian criminal justice system treated the Muslims severely, but was lenient to the Hindus.

Last year, there were two messages purported to have been issued by the Indian Mujahideen warning of its plans to carry out terrorist strikes.

The first message was disseminated by email on September 19, 2010. It was shown as having been signed by one Al Arbi the same day. It referred to certain anti-Muslim incidents which allegedly took place in Ratlam in Madhya Pradesh on the day of Eid (September 11).

It also referred to the day (September 17) when the total number of people allegedly killed by the security forces in Jammu and Kashmir crossed 100.

Many of the religious allusions in the message had been taken from some past messages of Osama bin Laden, but bin Laden was not mentioned by name.

The statement did not directly claim responsibility on behalf of the IM for the attack in Delhi on September 19 in which two Taiwanese tourists were injured. However, it indirectly hinted at its responsibility by saying: 'In the name of Allah we dedicate this attack of retribution....'

While over 75 per cent of the statement was about alleged atrocities against Muslims in Jammu and Kashmir, there were also condemnatory references to the death of two IM suspects during a raid by the Delhi police on September 19, 2008, to the arrests of some alleged members of the IM by the Anti-Terrorism Squad of the Maharashtra police in connection with the Pune German Bakery blast of February 13 last year and some alleged anti-Muslim incidents in Ratlam in Madhya Pradesh on Eid day.

A message dated December 6, 2010, purporting to be from the IM indirectly claiming responsibility for the explosion in Varanasi on December 7, 2010, was received by some media outlets to which it was addressed after the explosion had taken place.

It projected the IM as a purely indigenous movement, but needing the support of the Islamic world. It warned the Hindus of continued attacks on Hindu holy places till all masjids were restored to them. It was critical of the Indian criminal justice system, which was projected as anti-Muslim.

It criticised the judiciary as follows: 'The Supreme Court, the high courts, the lower courts and all the commissions have utterly failed to play an impartial role regarding Muslim issues. (Gujarat CM) Narendra Modi who presided over the 2002 massacres of Muslims in Gujarat is given a clean chit whereas the victims still run from pillar to post for justice. Even the '92 Mumbai culprits roam freely and enjoy government security. All the anti-Muslim pre-planned riots, arson, rapes, losses of lives and properties are still awaiting justice. The list is endless!'