Why is govt shying away from discussion on repeal of farm laws: Cong

The Congress on Monday attacked the government over the passage of the farm laws repeal bill in the Lok Sabha without a discussion, charging that all parliamentary norms have been 'thrown to the wind'. 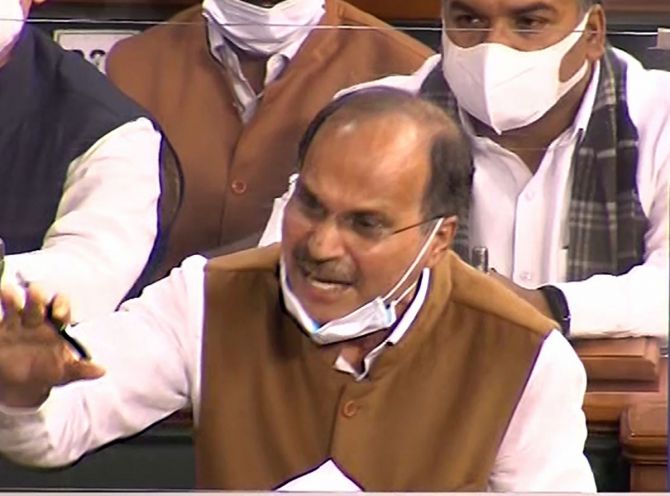 Congress leader in the Lok Sabha Adhir Ranjan Chowdhury asked why the government was shying away from a discussion on the bill, when the opposition was supporting them.

A bill to repeal the three contentious farm laws, against which farmers have been protesting for over a year, was passed by the Lok Sabha within minutes of introduction on Monday.

The Congress has also demanded that there should be legal guarantee for the minimum support price to farmers and that compensation should be granted to farmers who suffered during the agitation and lost their lives, Chowdhury told reporters outside Parliament.

He said the Congress has also demanded that all 'false' cases lodged against farmers during their year long agitation should be withdrawn immediately.

Chowdhury said the Congress has also demand the sacking of Union Minister Ajay Mishra, whose son has been arrested in the Lakhimpur Kheri violence case.

"Today, all Parliamentary norms have been thrown to the wind," he alleged.

Congress chief spokesperson Randeep Surjewala said the government passed the bill as it did not want any accountability.

'A debate would make the PM and the BJP answerable for Conspiracy to sell the farming sector at the altar of Crony Friends; Sacrifice of 700 farmers; Not giving MSP,' Surjewala charged in a tweet.

Congress chief whip in the Rajya Sabha, Jairam Ramesh, said, 'Modi Sarkar wants to push through the three farm laws repeal Bill today in Parliament WITHOUT any debate. The passage of the laws 16 months ago was most undemocratic. The manner of repeal is even more so. The Opposition demands a discussion before repeal.'