Has anyone heard that one million individual calculators supplied to banks had been tampered by the manufacturer to siphon off funds? Asks Pallava Bagla. 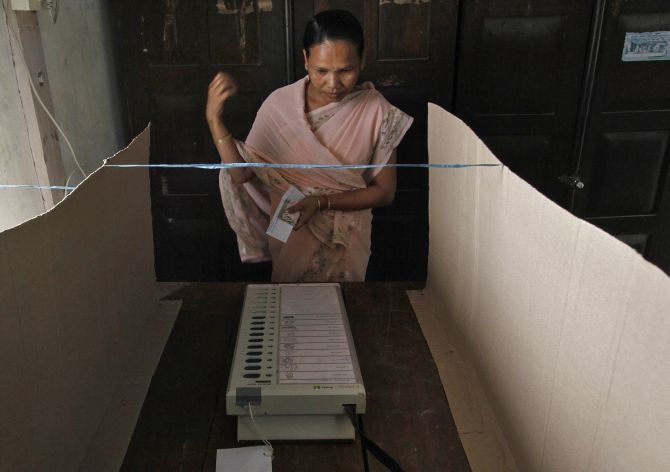 All of a sudden this month the nifty Indian invention, the unique electronic voting machines that were hailed to be the harbingers of free and fair elections in India, are being made out to be the villains of the piece.

So have the machines suddenly become fallible and has anybody ever hacked into them? The machines are the same and nobody has ever hacked them, the problem could lie elsewhere in depleting political values.

The independent Election Commission of India says ‘it completely reaffirms its faith in the infallibility of the EVMs these are fully tamper-proof as ever’.

It adds ‘baseless, speculative and wild allegations are being made which deserve to be rejected’.

There is an old saying the ‘winner takes it all and the loser cries foul!’ The stunning results in the last round of assembly elections has made many of the losers of the polls cry foul that it is the technology that failed them and not that their poll promises were rejected by the people.

According to the ECI, till date, 107 elections to states and three parliamentary polls have been smoothly conducted using the EVMs. In the 2014 Lok Sabha elections, a million units of these special electronic devices that are really foolproof machines were used and all hailed the verdict as being fair.

Not many countries can boast of electronic voting, even the world’s oldest democracy the United States still often resorts to paper ballots. Recall the fracas that was created in 2000 when vice-president Al Gore lost his presidential challenge to George W Bush all thanks to what was called the ‘hanging chads’ as the US had used paper ballots.

The size of standard key board but a little thicker, they come in three variants, the generation 1 machines are all but discarded and today, mostly generation 2 and generation 3 machines are being used.

Only a handful of countries are using electronic voting.

According data from the non-profit National Democratic Institute, Washington DC, about a dozen countries have used remote Internet voting for binding political elections or referenda that includes Canada, Estonia, France and Switzerland.

It is these networked machines which are failing and are prone to hacking.

Uniquely, the Indian voting machine is not networked or linked to the Internet and is considered one of the finest innovations in modern India. Hacking is much easier if machines are networked and when data is being sent across distances using the Internet.

Has anyone heard that one million individual calculators supplied to banks had been tampered by the manufacturer to siphon off funds?

In 2014, a whopping 1.4 million individual electronic voting machines were used in 930,000 polling stations spread across the country. The entire lot of the EVMs are manufactured by two public sector companies the Bharat Electronic Limited, Bangalore and the Electronic Corporation of India Limited, Hyderabad.

The voting data is recorded on a simple imported chip which has a small and simple software that is burnt directly onto the chip itself and each vote as it is cast is recorded directly on the chip.

The machines are so robust that unless the chips themselves get destroyed the data can be recovered even if the batteries die out or even if the power is accidentally cut off.

Another feature called a voter verifiable paper audit trail is slowly being added to machines to make the process even more transparent.

According to Rajat Moona, former Director General Center for the Development of Advanced Computing, Pune and currently Director of Indian Institute of Technology, Bhilai who is part of the Technical Expert Committee of the ECI that critically evaluates the EVMs says the secure micro controllers or chips are purchased from large commercial manufacturers like Motorola, Renaissance and NXP who also supply chips to missile manufacturers and all kinds of secure computing device manufacturers.

The chip fabricator has no idea where the chip will be ultimately used from Gandhinagar to Guwahati. Moona says the Indian EVM has been designed for Indian conditions and it is at least one hundred times more secure than any commercially available machine that is being used in other countries.

The machine itself consists of a control unit and a balloting unit connected using a long cable. The balloting unit is kept secluded so that the secrecy of the ballot is maintained.

Several layers of seals ensure that the machines are not tampered with in any manner.

There is a double randomisation process which makes it impossible for any person to know which machine will be used in what constituency, this is done to safeguard that machines are not pre-programmed to cast ballots in favour of a particular candidate.

Even the final placement of the list of candidates on the balloting unit is not known till the last day of withdrawal of nomination before elections, so tampering with machines is virtually an impossible task.

The candidate names are placed in an alphabetical order giving it even more variability.

Election Commission of India explains, ‘EVMs are randomised by computer software twice. Once for allocation of machines to assembly constituencies and second to polling stations in the presence of candidates’, this means no one really knows which machine would go to what location and hence pre-programming can be ruled out as a way of tampering.

An electronics engineer from the US once suggested that he could tamper with the machines using a specially designed bluetooth enabled display unit, but in several open public demonstrations at the office of the ECI, no one has been able to hack the EVMs.

Even the Supreme Court of India heard a bunch of petitions challenging the robustness of machines but it finally ruled that the EVMs were reliable and secure.

On counting day the machines are removed from the strong room where they are kept under twenty four hour armed guard and the votes polled are displayed sequentially in the presence of the observers of candidates.

A new unit called a ‘totaliser’ was proposed to keep the anonymity and secrecy of votes intact.

The counting is rapid and within hours the fate of who wins the elections is known, whereas in times when a paper ballot was used it would takes days and weeks for the election results to be finally declared.

The first EVMs were used in the southern Indian state of Kerala in 1982 and since then the general elections of 2004, 2009 and 2014 have witnessed one hundred percent electronic voting.

According to the ECI, ‘the EVMs reduce the time in both casting a vote and declaring the results compared to the old paper ballot system. Bogus voting & booth capturing can greatly reduce to almost nil… illiterate people find EVMs easier to use’.

Transporting and storing these machines is also much easier. Violence on polling days has become a distant reality thanks to electronic voting.

Individual machines are not connected to networks this ensures that hackers don’t take control of machines since if a nefarious mind were to tamper then each unit of the over one million machines will have to be individually fixed, a Herculean task indeed!

The last time paper ballot was used in a parliamentary election it required some 7-8,000 tons of paper just to print the ballots which is the equivalent of cutting down some 120,000 full grown trees so in a way the EVMs are greener and can be used repeatedly.

“Indian machines are tamper proof and no one has been able to actually demonstrate that the EVMs could be manipulated,” asserts Nasim Zaidi, Chief Election Commissioner of India.

Pallava Bagla
© Copyright 2020 PTI. All rights reserved. Republication or redistribution of PTI content, including by framing or similar means, is expressly prohibited without the prior written consent.