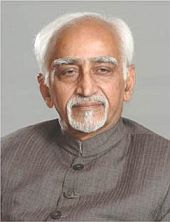 Finance Minister Pranab Mukherjee's bonanza to Members of Parliament of increasing their Local Area Development funds from Rs 2 crore to Rs 5 crore has come as a shot in the arm for members of  the Parliament cutting across party lines. All are happy except one leader, the chairman of the Rajya Sabha Hamid Ansari.

Vice President Ansari is learnt to have raised the issue with Pranab Mukherjee pointing out to him that the Lok Sabha speaker Meera Kumar has been given the MPLAD funds, but he has not been.

To which the chairman replied that the entire country is his constituency!

It is not required since the Upper House does not decide the fate of the finance bill. The government falls if the bill is rejected by the Lok Sabha.

A number of MPs had met Pranab Mukherjee and raised the MPLAD issue with him. They had told him that he should either increase the allocation or else scrap it since they could not do justice to the demands being voiced by various sections of their constituency and many of them ended up getting into more problems than they solved.

They said that with the rising costs, Rs 2 crores was not sufficient to achieve a great deal in terms of development and doing actual work in the constituency.

Probably appreciating that what they said makes sense, since Pranab Mukherjee is also a Lok Sabha MP now and has to deal regularly with demanding voters, it was decided to increase the allocation.

He said that the permission of the Election Commission had been taken since the model code of conduct has kicked off with elections to five state assemblies being held, but it is only after the elections are over that the increase would come into force.

Interestingly, during his speech Mukherjee made a reference to Union Power Minister Sushil Kumar Shinde saying he had been critical of him in the past but was now able to appreciate his good work as the power situation in many parts of the country is very good. He said he wanted to compliment the power minister for this.

Sharad Pawar, who also hails from Maharashtra like Shinde, was seen grinning widely at the compliment given to Shinde.

When Pranab Mukherjee sat down, Congress president Sonia Gandhi also decided to join in the humour and told him that he had complimented Sushil Kumar Shinde but not Sharad Pawar. She said that Pawar may be upset at this.

It certainly was a day when Pranab Mukherjee went out of his way to keep a lot of people happy.