Was it Uddhav's back-seat driving of Shinde's ministry?
Did Shinde feel slighted by Aaditya Thackeray's rapid ascent in the Shiv Sena?
Was his spat with Sanjay Raut on Monday the last straw?
Prasanna D Zore/Rediff.com finds out. 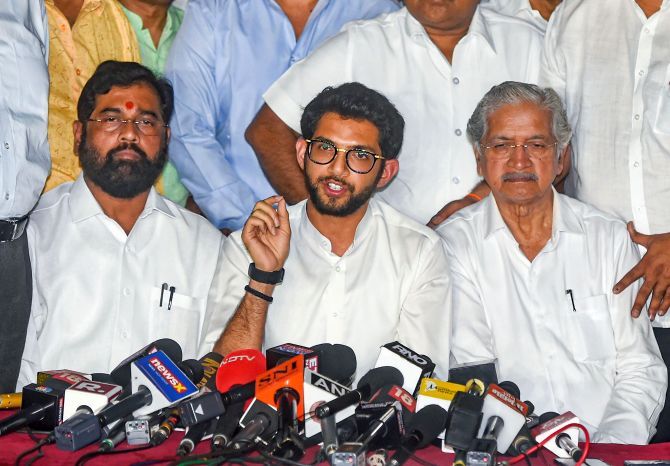 Eknath Shinde has been feeling sidelined in Maharashtra's urban development ministry for the last 18 months.

Chief Minister Uddhav Thyackeray's coterie -- led by Shiv Sena General Secretary Milind Narvekar who was once Thackeray's personal assistant -- would ensure that all the proposals put forth by Shinde's ministry for clearance or seeking funds for his ministry were either scuttled through bureaucratic red tape or rejected.

There were orders from the chief minister's office that Shinde should not clear any major project without Uddhav's approval.

During this month's election to the Rajya Sabha and Maharashtra Legislative Council, the Shiv Sena's youth wing, the Yuva Sena -- led by Thackeray's son Aaditya and his cousin Varun Desai -- decided which hotels Shiv Sena MLAs were to be safe-housed, their security, even the meals they were to be fed.

Yuva Sena office-bearers were also given important roles to play during the counting of votes for the Rajya Sabha and legislative council elections.

Eknath Shinde, once considered Uddhav's right-hand man, was sidelined from all the major assignments in the Shiv Sena.

Uddhav Thackeray and his wife Rashmi Thackeray -- who is considered to be an influential voice in Sena matters -- probably feared that their elder son Aaditya's ascent in the party would be scuttled if Eknath Shinde continued to be more powerful in the Sena.

Nominating Aaditya to contest the 2019 assembly election -- he was the first Thackeray to test his popularity at the ballot box -- signalled the first strike against Shinde.

Aaditya's elevation as the state's tourism minister after the Maha Vikas Aghadi ministry was formed was the second strike at Shinde's power structure in the Sena.

During his tenure at the urban development ministry, Shinde was known to be magnanimous with distribution of funds as well as helping out fellow MLAs with development of their constituencies. That made him popular with the flock of Shiv Sena MLAs who are now with Shinde now in Surat.

In Development Plan 2034, about 2,000 files related to redevelopment of slums and chawls were stalled due to red tape and certain discrepancies in the plan.

Shinde ensured that many of these rehabilitation projects were cleared without any give-and-take.

Uddhav Thackeray's coterie resented Shinde's style of functioning as it made him popular among Shiv Sena MLAs at the cost of acceptance of Aaditya as their next leader.

During the legislative council election, Shinde said the Sena should contest the Thane Municipal Corporation election on its own under his leadership, but the Sena's Rajya Sabha MP Sanjay Raut reportedly called him a political novice in front of party MLAs and declared that the constituent parties of the MVA would fight the TMC election in alliance.

Reprimanded in front of Sena MLAs, Shinde felt humiliated and left the party meeting on Monday in a huff.

This episode may have made Shinde realise that his future in the Shiv Sena would always be shortcircuited by the coterie surrounding Uddhav Thackeray.