Why 'centre-left thinking' Varun Gandhi is still with BJP

'When I joined the BJP, after a few years I realised one very good thing about it was that there was a decentralisation of power. I think centralised power in any form is never a great thing' 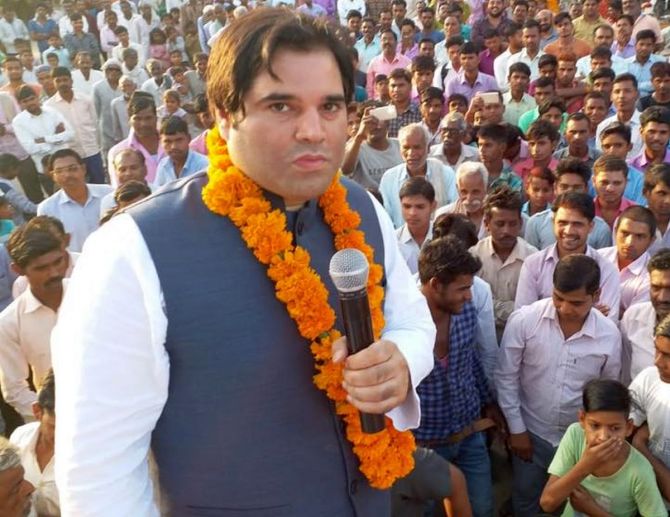 Describing himself as a “centre-left thinking person”, Bharatiya Janata Party MP Varun Gandhi says in a new book that he is not a rightwing person by nature and his writings are evidence of his “consistently progressive liberal record”.

The book gives readers a snapshot of contemporary Indian politics through interviews of 20 of the country's most prominent next-generation politicians.

"My sense is, if one were to look at it in terms of ideology or policy, then I am a centre-left thinking person. I am not a right-wing person by nature. If you have read all my writings, for the last 10 years I have had a consistently progressive liberal record. As a person, I have grown into this voice which is what's inside me," Varun Gandhi says in an interview to the authors, Pradeep Chhibber and Harsh Shah.

The Gandhi-Nehru scion -- he's the son of the late Sanjay Gandhi and BJP leader Maneka Gandhi -- joined the BJP in 2004.

He fought and won his first election in 2009 from Pilibhit in Uttar Pradesh, the same seat he represents right now, with a margin of nearly three lakh votes.

The Pilibhit MP also brings up issues such as economic inequality, environment justice, disadvantaged communities in the interview to buttress his point of being a staunch progressive liberal.

"... I have always taken stands that are symptomatic of some desire for progressive change. The kind of support and love that I get from a variety of audiences, I get about 10 times more support from the liberals than I get from the right-wingers. In fact, I get knocked by the right-wingers many times but I never get knocked by the liberals ever," he says.

Varun Gandhi adds that communists always joke with him and say he is a "communist in the BJP".

The 40-year-old politician dissociates himself from terms such as "firebrand" or “strident”, a perception that many people had of him after the alleged hate speech controversy in 2009 for which he was later acquitted by the courts.

While campaigning as a BJP candidate from Pilibhit in 2009, he attracted controversy and ire over his alleged hate speeches.

He was booked under various sections of the IPC and the People's Representation Act for promoting enmity and acts prejudicial against communal harmony.

He was acquitted in 2013 because of lack of any substantial evidence against him.

Varun Gandhi, who writes a syndicated column and has authored several books, including two volumes of poetry, says it has been a very long time since the infamous incident and there have been a hundred things he has done since then.

He also points out in the interview that he was the "only MP in Parliament" to sit at Anna Hazare's dharna and support the Lokpal Bill.

"I don't think, to be honest, that anybody thinks any more that I am a firebrand person or a strident person. If you look at any of the public platforms, I don't think anybody would mention that. The thing is it was a very bizarre thing, the so-called speech, because when I fought my case and won, they apologised to me," he adds.

Asked what draws “someone with progressive liberal views, being centre-left” to the BJP, why he is sticking with it and why he is not moving to a party “more in line” with his values and outlook on so many issues, Varun Gandhi says he has been in the BJP for 15 years.

"… I have built relationships within it, I have got friends here. I feel that in the medium-to-long-term, the workers of the BJP, I feel, are very committed, hard working, middle class, humble, salt of earth people who mean well for this country. I am not a huge votary of party politics, to be honest, so that's not what I think about at all," he explains.

Varun Gandhi also speaks about what he really likes in BJP -- "decentralisation of power" and "tolerance of different intellectual disciplines within the larger political framework".

He admits to strident right-wing voices within the party, but gives the example of former prime minister Atal Bihari Vajpayee who for the large part of his life talked about "Gandhian socialism".

"When I joined the BJP, after a few years I realised one very good thing about it was that there was a decentralisation of power. I think centralised power in any form is never a great thing.

"So I felt here was a party where even if you fell out with one leader you could survive and succeed because there would be four other people to see goodness and talent and worth in you. That is one thing that encouraged me as a young person."

Varun Gandhi's syndicated column reaches a subscriber base of over 200 million through 17 newspapers, covering many different languages.

In late 2018, he authored a book on rural distress, Rural Manifesto: Realizing India's Future Through Her Villages.

Discussing his column, he says, "And I write solely on policy. I don't write on politics in an adversarial manner. A lot of them are solution-oriented and the syntax is not meant to be polemical, it is not meant to be an us versus them, me versus you, because in policy terms there is no me and you, there is only us."