Why BJP's Bengal debacle was good news for Shivraj Chouhan

A BJP victory in the high-octane West Bengal election could have turned the fortunes in rival Kailash Vijayvargiya's favour, reports Sandeep Kumar. 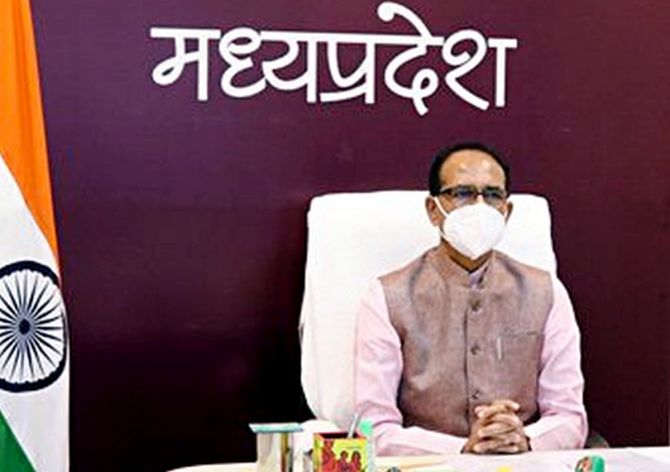 The grave mismanagement of the pandemic in Madhya Pradesh has not only exposed the frail condition of its health infrastructure but also the disintegrating control of Chief Minister Shivraj Singh Chouhan over the state's affairs.

Despite a defeat in the prestigious assembly by-election in Damoh, a much-needed breather came for Chouhan from West Bengal, where the Bharatiya Janata Party lost the assembly election.

A BJP victory in the high-octane West Bengal election could have turned the fortunes in his favour.

Vijayvargiya, who has held several key portfolios as minister in Madhya Pradesh, was brought into national politics in 2014 by then BJP president Amit Shah.

Since then Vijayvargiya stayed in West Bengal and raised a robust party cadre in the eastern state.

"For many years Vijayvargiya tried to sabotage Chouhan's leadership in the state so that he could become chief minister.

"But by the time Chouhan became chief minister for the third time in 2013, Vijayvargiya had been rendered isolated in the state. He happily shifted to central politics."

"It's true that Vijayvargiya was in charge of West Bengal elections but don't forget that Prime Minister Narendra Modi himself held 23 rallies in two weeks in West Bengal and Union Union Home Minister Amit Shah addressed 79 of them and roadshows in less than 20 days.

"So to my mind, there was no chance of Vijavargiya getting credit or discredit for the party's performance in West Bengal," he said.

Girija Shankar accepts there are leaders in Madhya Pradesh BJP who secretly desire to become chief minister but in the present scenario it is a distant dream.

The BJP candidate in Damoh, Rahul Lodhi (who switched sides from the Congress), accused party veteran Jayant Malaiya of conspiring against him.

Within days Malaiya's son Siddharth was suspended from the party.

However, a BJP leader said Chouhan's reputation was intact amid all this because state BJP president V D Sharma was the key person in the by-poll.

With Covid cases crossing 7,00,000, coordination on the health front is missing.

According to Bhadbhada crematorium (Bhopal) records, in April 1,652 Covid-infected people were cremated there.

The collective data of all crematoriums and cemeteries shows that in April more than 3,000 Covid-infected people died.

But the government data says that in April this year only 104 people died of Covid-related complexities in Bhopal.

There are also allegations that bureaucrats are manipulating Covid-related data.

The complaint has come from none other than BJP MLA and former state health minister Ajay Vishnoi.

It is noteworthy that one of the biggest states of the country does not have any major oxygen plants.

After patients died due to lack of oxygen, the state government decided to establish such plants in 37 districts.

Last year when the pandemic hit, the chief minister had promised that a 150-tonne oxygen plant would be set up in the Babai industrial area but the promise is yet to be fulfilled.

Indore-based activist Anand Rai said the state government had no clue about the pandemic and instead of fulfilling the basic requirements, it was busy fudging data.

"There is no coordination among BJP leaders. Most of them are acting on their own, and Chouhan is watching helplessly.

"The state government should leave petty politics aside and ask for experts from other political parties," he said.

A BJP leader said that Chouhan has been on good terms with Suresh 'Bhaiyyaji' Joshi, former general secretary of the Rashtriya Swayamsevak Sangh who recently stepped down on health grounds.

"The RSS backed him whenever he required its backing. However, the same is not true with Dattatreya Hosabale, the new general secretary," the person said.