While it made sense for Capt Amarinder Singh to support the Gandhis since none of the 23 'rebels' had any mass base, the truce was important for his ambition to lead the party in the February 2022 state elections. 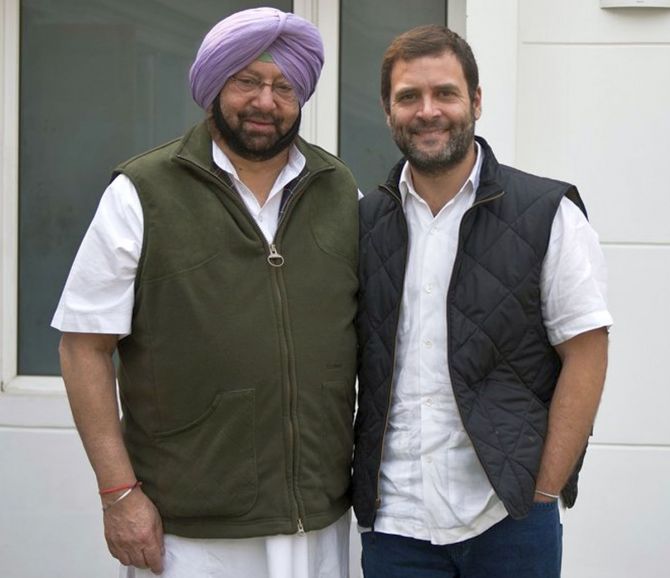 So, it surprised some when last month Amarinder spoke against the 23 party leaders for writing a letter demanding changes in the leadership.

In his August 23 letter, in response to the one by 23 of his party colleagues, Amarinder said the Congress had no alternative to the leadership of the Nehru-Gandhi family.

He said Sonia should hand the leadership baton to her son, whom he described as “fully competent” to lead the party.

The Punjab CM’s support to the family, including faith in Rahul's leadership abilities, came in the wake of the sustained attack on him by Congress Rajya Sabha MPs Pratap Singh Bajwa and Shamsher Singh Dullo after a hooch tragedy in Amritsar on July 29 which, eventually, claimed 120 lives.

Bajwa is a known acolyte of Rahul, and party sources say it is reasonable to assume he had the licence to slam his own party’s government and the chief minister.

Bajwa went as far as to meet the Punjab governor to demand a Central Bureau of Investigation inquiry into the hooch incident.

The Congress central leadership is yet to act against Bajwa even weeks after its Punjab unit chief Sunil Jakhar, as well as Amarinder's Cabinet in a unanimous resolution, demanded the party expel him.

Bajwa, who went on to say that Amarinder has “lost his mental balance” after the Punjab government withdrew his security, has muted his criticism ever since the Punjab CM’s letter reposing his faith in the leadership of the family.

According to sources, Congress leader Ahmed Patel reached out to Amarinder to write the letter supporting the family as also Rahul.

While it made sense for Amarinder to support the Gandhis since none of the 23 had any mass base, the truce was important for his ambition to lead the party in the February 2022 state elections.

Earlier, Amarinder had maintained that 2017 would be his final electoral battle, but in June he said he was keen to lead the party in the 2022 elections.

In his recent interviews, the Punjab leader also stressed he had no national ambition, ruling himself out as a potential non-Gandhi dynasty national chief of the Congress.

Yet, the compromise between Amarinder and Rahul is an uneasy one.

Rahul and his team are convinced the Congress needs to look beyond the 78-year-old Amarinder.

Many in the Congress’s Punjab unit believe the current government is increasingly becoming unpopular.

They say the government will face strong anti-incumbency in the 2022 polls, and only a split in the vote between the Aam Aadmi Party, which is trying to revive itself, and the two factions of the Akalis may help it return to power.

They attribute the downward graph to the CM’s inaccessibility.

His detractors within the party say in the past five months, Amarinder has been loath to step outdoors to meet people, and went to meet the victims of the hooch tragedy after much cajoling by party leaders.

In Amarinder’s defence, his advisors point out that he regularly and effectively reaches out to people through social media and online conferences.

The effort is managed by his maternal grandson Nirvan Singh.

Since mid-May, Amarinder interacts with people via a weekly #AskCaptain question-answer session.

But he is maintaining “social distancing” with his party leaders and workers and this has upset them.

They complain their work does not get done.

Party sources accuse the chief minister of excessively relying on bureaucrats to run the government.

They complain his ministers are mere rubber stamps; that his 17 ministers have access to him only through babus; and how his immediate family members have carved out their respective spheres of influence in running key departments.

Bajwa, sources say, is giving vent to these frustrations “widespread” among party’s rank and file, including MLAs.

Of course, Bajwa, a former state minister with a reputation as a good administrator, has his own ambition.

He was Amarinder’s man Friday during his earlier stint as the CM between 2002 and 2007.

Already 63, the 2022 assembly polls will likely be Bajwa’s last shot at the chief ministerial chair.

For all of the Rahul camp’s dislike for Amarinder not kowtowing to the party’s central leadership -- the Punjab CM has a good equation with Prime Minister Narendra Modi, and has not always backed the party’s stand on issues of national security -- it knows he is currently Punjab’s tallest Jatt Sikh leader.

Though the Congress leadership cannot afford to unsettle Amarinder, it believes its only chance at winning the next state elections is if it succeeds in projecting Navjot Singh Sidhu as Amarinder’s successor.

Sidhu, who quit the state Cabinet in a huff last July, has the backing of Priyanka Gandhi Vadra and Rahul.

Sources said he could be made state unit chief or campaign committee chief.

There is, however, consensus across party lines that 56-year-old Sidhu will be the joker in the pack for the 2022 polls.

He is immensely popular in the state’s towns and villages.

It worries some in the Congress that the AAP is keen that the former cricketer joins it.

The challenge before the Gandhi siblings is how they can get Amarinder and Sidhu to bury the hatchet.