When Prime Minister Modi travelled to the US last year Home Minister Rajnath Singh was officially put in charge of the government.

But the BJP's national executive in Bengaluru made it clear who now matters in the party and in what order. Sheela Bhatt/Rediff.com reports 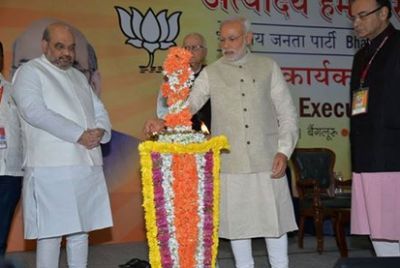 Prime Minister Narendra Modi on Thursday will leave on his three-nation tour that will take him to France, Canada and Germany, between April 9 and 16.

When PM Modi visited the United States in September-October 2014, he had directed that all government business of urgent nature should be sent to Home Minister Rajnath Singh.

Rajnath Singh, thus, was No. 2 in the government as the prime minister had made him officially in charge of urgent matters of the government in his absence.

But will PM Modi again make Rajnath Singh the official in charge of urgent affairs of the government?

For now the political signals are unclear, going by what was witnessed at the national executive of the Bhartiya Janata Party held in Bengaluru last week.

At the mega event, party president Amit Shah, Prime Minister Modi, Finance Minister Arun Jaitley and the party’s mentor L K Advani were on stage during all important events. During the major presentation on the land bill and Jammu and Kashmir, Jaitley was on stage along with Shah, Modi and Advani while Rajnath Singh, Foreign Minister Sushma Swaraj and Urban Development Minister Venkaiah Naidu remained seated in the front row.

It was surprising for the participants to see Rajnath Singh not seated next to Shah and Modi. It was Jaitley who completed the powerful troika along with the two most powerful leaders from Gujarat.

The Bengaluru national executive was the first one after the one in Goa in June 2013 where Modi was nominated as the prime ministerial candidate of the party.

When some younger MPs from Uttar Pradesh pointed out Rajnath Singh’s absence on the stage, they were told by some old hacks that PM Modi is the leader of Lok Sabha, Jaitley the leader of Rajya Sabha and Adavni, chairman of the parliamentary party.

The government is expected to clear the air on who is officially No. 2 in the government before PM Modi leaves for his foreign tour.

Last year Cabinet Secretary Ajit Seth had issued a circular pertaining to working arrangements for disposal of urgent business in the absence of PM Modi, and said, 'The prime minister has directed that during the period of his absence on foreign tour from 25th September to 1st October, 2014, urgent business may be put up before the Union Home Minister for disposal.'

Copies of the circular were marked for Singh, Jaitley, Sushma Swaraj, Naidu and Minister of Road Transport and Rural Development Nitin Gadkari, besides principal secretary to the PM Nripendra Mishra.

It is said that senior colleagues in the BJP are unhappy about the slow and too-cautious decision-making process of Rajnath Singh.

On May 26, 2014, during the swearing-in ceremony, Rajnath Singh was the second to take oath, after Modi. Also, in the powerful Appointments Committee of the Cabinet, PM Modi had kept only Rajnath with him. But in the Bengaluru national executive, it became clear who matters in the party and in what order.

It will soon be known if the power equations within the Union Cabinet have changed after more than 10 months.