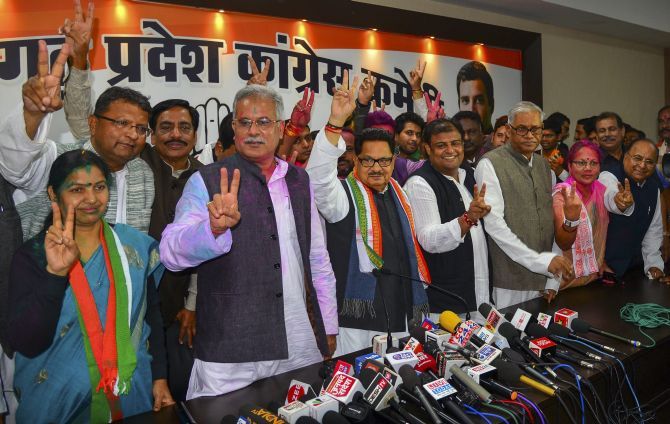 When the Congress was running a feisty campaign to return to power in Chhattisgarh after 15 long years, it was often asked about its face against the saffron party's longest-serving chief minister Raman Singh.

Armed with a big majority now, the grand old party has quite a few options.

T S Singhdeo -- scion of an erstwhile royal family, leader of Opposition in the outgoing assembly and a key contender for the top post -- said during the poll campaign that the chief minister would be selected through a 'Swayamvar'.

The process to select the chosen one seems to be underway and a decision could be announced as early as Wednesday about who would be the next chief minister -- only the second from the Congress in this Naxal-affected state.

The Congress had formed the first government of the state after it was carved out of Madhya Pradesh in 2000, but its then chief minister Ajit Jogi has since then left the party and fought the latest assembly polls in alliance with Maywati's Bahujan Samaj Party as the third force in an otherwise direct fight between the two national parties.

The 'Swayamvar' is also likely to have Tamradhwaj Sahu, the single Congress MP from the state, while the state Congress chief Bhupehsh Baghel and former union minister Charandas Mahant are also there.

When many were talking about lack of a clear verdict from Chhattisgarh and who would align with whom, Singhdeo was very categorical and had told PTI there was no need to 'look left or right' for any support and his party would form the government on its own.

The Congress has indeed stormed back to power with the best performance among all the five states that went to polls.

The party has significantly improved its tally to get a clear majority in the 90-member assembly and its vote share has also improved to 43.2 per cent.

Singhdeo was the main architect of the Congress party's poll manifesto, which he said was made after feedback from about 80,000 people from across the state.

It was this manifesto, especially the promises relating to farmers, that many believe became a game-changer in the party's bid to dislodge a populist chief minister.

On the CM candidate, he had said the winning MLAs and the party high-command will choose the leader.

"There are many good people in the party who have done very good work. So there will be a 'Swayamvar' after the poll victory," he had said.

The other key contender, Sahu comes from an influential community that accounts for 14 per cent of the state's population and is chairman of the party's OBC cell.

He was given the job of mobilising backward community voters who had largely favoured the Bharatiya Janata Party in the last 2013 polls.

The other two prominent candidates for the top post, Baghel and Mahant too hail from OBC communities, but Sahu's non-controversial and clean image goes in his favour, some party leaders said.

Born on August 6, 1949 to a farmer's family in village Patora in Durg district, Sahu completed his schooling in Durg.

While pursuing graduation from Science college Durg, he dropped out after the death of his maternal grandfather.

He became member of Pauwara gram pacnhayat in 1975 and later went on to become a sarpanch.

Around the same time, he joined the Congress and was made head of a block committee in Durg in 1977.

His tryst with electoral politics started in 1998 when he was first elected as an MLA from Dhamdha in the erstwhile Madhya Pradesh.

Subsequently, he was elected MLA in 2003 and in 2008 from Dhamdha and Bemetara seats, respectively.

After the formation of Chhattisgarh in 2003, he served as a cabinet minister in the then Congress government.

He lost to BJP's Awdhesh Chandel from Bemetara in 2013 assembly election, following which he was given ticket from Durg Lok Sabha seat in 2014 against BJP's then MP Saroj Pandey.

After defeating Pandey by a margin of 16,848 votes, Sahu emerged as the most prominent Congress leader in the state.

In case of Singhdeo, his considerable following in northern part of the state (Surguja) is a big positive, besides the confidence he commands of the party high command.

A two-time MLA, Singhdeo was elevated to the position of Congress Legislative Party leader after the party lost in 2013 elections.

He is said to be at forefront of the Congress's efforts to return to power in this state that had become a key bastion of the BJP during the last 15 years.

Born on October 31, 1952 in Allahabad in the Royal Family of Surguja, his father late MS Singhdeo was an IAS officer and retired as Chief Secretary of the erstwhile Madhya Pradesh.

His mother Devendra Kumari had served as a minister in Madhya Pradesh government.

Having studied at the Scindia School in Gwalior, the prestigious Hindu College in Delhi and the Hamidia College of Bhopal, Singhdeo began his political career with the Municipal Council of Ambikapur where he twice served as chairman.

He was first elected as MLA in 2008 from Surguja constituency which was earlier reserved for the ST and became a general seat after the delimitation in 2008. He became an MLA for consecutive second time in 2013 from the same seat.

His supporters know him as a soft-spoken, grounded and humble person, even as some critics have accused Singhdeo, an upper caste Thakur, of acting a 'shadow chief minister' and of not going too hard against Raman Singh.

Tikeshwar Patel
© Copyright 2020 PTI. All rights reserved. Republication or redistribution of PTI content, including by framing or similar means, is expressly prohibited without the prior written consent.