Thirteen international experts of the World Health Organization arrived in Wuhan on Thursday for the long-awaited probe into the origins of the deadly coronavirus pandemic, while two others did not board the flight from Singapore to the central Chinese city after they tested positive for COVID-19 antibodies. 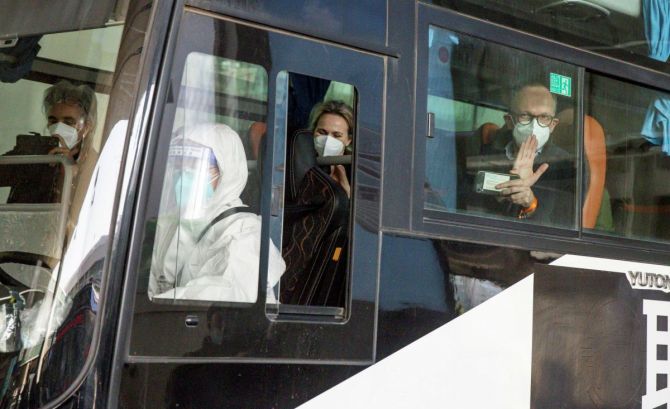 “The international team of 13 scientists examining the origins of the virus that causes #COVID19 arrived in Wuhan, #China, today. The experts will begin their work immediately during the 2 weeks quarantine protocol for international travellers,” the World Health Organisation said in a tweet.

“Two scientists are still in #Singapore completing tests for #COVID19. All team members had multiple negative PCR and antibody tests for COVID-19 in their home countries prior to travelling,” it said.

“They were tested again in #Singapore and were all negative for PCR. But two members tested positive for IgM antibodies. They are being retested for both IgM and IgG antibodies,” the WHO said.

The two experts failed to clear the screening procedures and were blocked from travelling to China, the Wall Street Journal reported.

“Chinese officials involved in the screening process blocked the two delegation members from boarding their plane to the central Chinese city of Wuhan after both tested positive for COVID-19 antibodies in blood-based serology tests during transit in Singapore,” the report said.

In Beijing, Chinese foreign ministry spokesman, Zhao Lijian defended the denial of permission to the two scientists saying that “relevant epidemic and control requirements and regulations will be strictly enforced”.

“We will also support and offer convenience to WHO experts' travel to China,” he told a media briefing replying to a question about the denial of permission to the two scientists and referred the media to competent authorities for details.

China requires passengers flying from Singapore to take a nucleic acid test and an IgM antibody test up to two days before boarding China-bound flights.

The 13 WHO experts would go through a 14-day quarantine. They are set to interview people from research institutes, hospitals and the seafood market linked to the initial outbreak.

The WHO team includes virus and other experts from the US, Australia, Germany, Japan, Britain, Russia, the Netherlands, Qatar and Vietnam.

The United States and Australia have led the charge in criticising China's handling of the initial stages of the pandemic, accusing Beijing of downplaying its severity and preventing an effective response until too late.

Outgoing US President Donald Trump has repeatedly blamed China for the global pandemic. The US has also said that China had not properly reported information it had about the coronavirus and had pressured WHO to mislead the world. IMAGE: Medical workers get ready inside a bus before the expected arrival of a World Health Organisation team tasked with investigating the origins of the coronavirus pandemic, at Wuhan Tianhe International Airport in Wuhan, Hubei province, China . Photograph: Thomas Peter/Reuters

China has denied the charges and maintained that it has fully cooperated with the WHO in combatting the disease.

Officials of the China's National Health Commission told the media in Beijing on Wednesday that the WHO experts will communicate with Chinese medical experts by video conferencing during their quarantine period.

The WHO team's visit has become a bone of contention as Beijing, which questions the widely-held view about the virus' origins in Wuhan, delayed granting permission to it.

NHC officials said that finding the origins of the virus is a scientific question and they suggested conducting similar visits to other countries to achieve this objective.

China has been proactively questioning the view that the deadly outbreak took place in a wet market in Wuhan where live animals, birds and reptiles are sold and spread to humans. The market remained closed and sealed since early last year.

Chinese CDC Deputy Director Feng Zijian said he has no answers as to what the intermediate host of the novel coronavirus was, or how the virus jumped from animals to humans, and China's medical experts will work closely with the WHO experts' team to try to probe its source.

"China has been calling for collective research by the international community into this virus. When the WHO team reaches Wuhan, Chinese experts will work closely with them to fulfill their job," Feng said.

In May last year, the World Health Assembly -- the governing body of the 194-member states of the WHO -- approved a resolution to set up an independent inquiry to conduct an "impartial, independent and comprehensive evaluation" of the international response as well as that of the WHO.

It also asked the WHO to investigate the "source of the virus and the route of introduction to the human population.

The WHO experts arrived in Wuhan as China is experiencing a relapse of COVID-19 cases.

Meanwhile, China on Thursday reported its first local COVID-19 fatality in about eight months since May 17, after a woman died on Wednesday in North China's Hebei Province, adjacent to Beijing, taking the death toll of the coronavirus cases in the country to 4,635.

As of Wednesday, the total number of confirmed COVID-19 cases in China reached 87,844, according to the NHC.

Several cities with millions of people in Hebei province, which borders Beijing, are under lockdown to prevent the spread of the virus.

According to Johns Hopkins University's coronavirus tracker, over 92,313,000 people have been confirmed with the disease across the world and more than 1,977,000 people have died.