Four members of the Bansal family committed suicide within two months.
In their parting note, they blamed the CBI for pushing them over the edge.
Rashme Sehgal reports on a tragedy that has startled India. 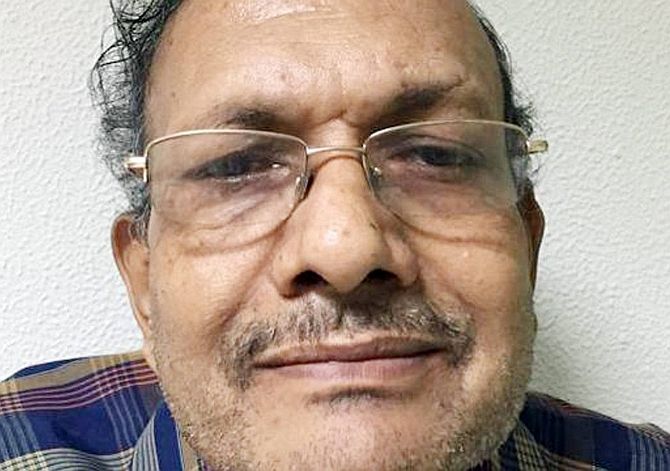 What drove senior bureaucrat Bal Kishan Bansal, a former director general in the corporate affairs ministry, and his young son Yogesh, 25, to kill themselves?

What becomes obvious is that this family had no one to turn to during their hour of grief. They may have had family in Hisar, Haryana, or some relatives living in Delhi, but these were possibly not people they could turn to in times of trouble.

Some facts have been played up repeatedly in the media.

On the very day he was caught taking the bribe, his house was raided by the Central Bureau of Investigation. On July 18, his flat was raided again, this time for a period of 13 hours.

On that very day, the CBI produced Bansal before a special court in Patiala House, Delhi, and sought an extension of his custody, claiming that they wanted to unearth a larger conspiracy and did not want him to be tampering with the evidence. The judge agreed and he was remanded to a three-day custody.

Within an hour of Bansal being put in custody, Satyabala and Neha committed suicide.

What drove them to take such an extreme step?

The question was put to Dr Jeetendra Nagpal, a Delhi psychologist.

"They obviously felt a sense of complete helplessness and indignity whereby their very integrity as individuals got jeopardised," says Dr Nagpal. "It is obvious that all the family members must have suffered unimaginable stress and this stress was internalised by them."

"We see this day in and day out wherein a family's reputation is completely destroyed by such an onslaught (both from the CBI and the police). This happens in our family system wherein the stress faced by one member is transferred to the other members who see no remedial action in sight," he adds.

The flat in Eklavya Apartments where the Bansals lived is extremely modest.

It has been sealed by the police, but it hardly boasts the kind of wealth that the CBI accused Bansal of amassing.

The CBI claims Bansal had over '50 bank accounts' and that the Bureau recovered five kilos of gold and Rs 56 lakh (Rs 5.6 million) from the flat.

This hardly seems the case given that the flat is filled with old furniture. The Bansals owned an old Maruti Alto, seldom used by the family.

The impression that a quick look at the flat conveys is of a house whose members are not used to spending money.

Senior advocate Rebecca John, who has long experience dealing with both the police and the CBI, believes: "While the CBI is well within its right to investigate a case, it is known to use very harsh investigative tactics while following a case."

"This is a white collar crime, which has resulted in the death of four people. For someone who has dealt with these agencies," John adds, "I must emphasise that they are known to change their reports as they did in the Aarushi murder case and also in the murder of the two cousin sisters who were found hanging in 2014 in Etawah."

"These agencies have unparalleled power and no accountability," she says.

This is exactly what Yogesh Bansal highlighted in his suicide note.

'The CBI officers who came to our house tortured my mother and sister to such an extent that they were driven to suicide. This is not a case of suicide, but a case of murder,' he wrote.

The words he used are, 'Itna sataya, itna sataya, itna tarpaya, is had tak pareshaan kiya (they harassed and tortured us beyond limits)' that they were left with no choice but to take their own lives.

Bansal used equally strong words in his accusation against the CBI wherein during the course of their night-long raid he heard a deputy inspector general at the Bureau tell a lady officer over the phone, 'Torture them so much that the mother and daughter are as good as dead.'

"The CBI is known to threaten and harass the accused," senior Supreme Court advocate Prashant Bhushan points out, "but they do not have a history of torturing or using third degree methods on their victims as is the case with the police."

"But these raids can be very humiliating, as they go around opening up the stuff of the accused and the language they use is very derogatory," he says.

Bhushan is condemnatory of the present practise of arresting people under investigation.

"I can understand that if there is a serious danger of people disappearing or if some heinous offences have been committed against the State, then the accused needs to be arrested. But where was the need to put the accused in this particular case under arrest?" he asks.

The neighbours at Eklavaya Apartments are not keen to talk about the family except to point out that unlike most young people, neither brother nor sister seemed keen to do regular jobs.

The CBI on Monday, October 3, released footage to show Bansal's wife Satyabala and Yogesh carrying out bags, allegedly containing gold and silver bars, from their lockers located in a New Delhi bank.

If they had so much money, why did these parents, given their conservative background, choose not to marry off their young daughter?

Many questions about this family's suicide remain unanswered.

One lesson to be learnt from these multiple deaths is how imperative it is for the CBI to adopt a more humane approach when dealing with the accused.