As the country readies to go to polls on July 25, one can’t deny the role of the military, but there are other factors too, reports Aditi Phadnis. 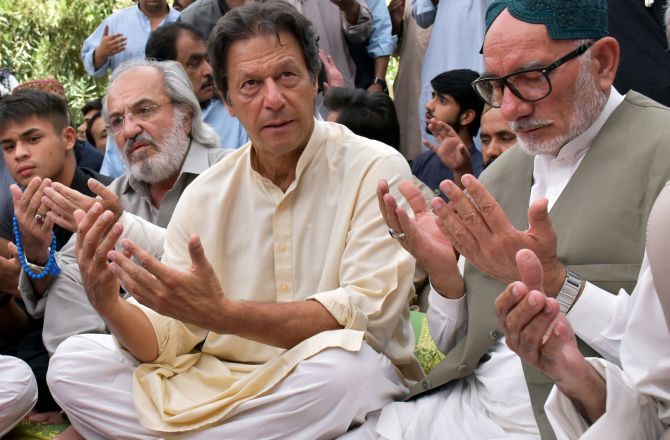 What’s at stake
The country on July 25 will hold elections to the National Assembly, comprising 342 members. Among them, 272 members are directly elected; 60 seats are reserved for women and 10 for religious minorities. A party or a coalition that reaches 172 can form the government. Women are elected from reserved seats as candidates of political parties but via a proportional representation system -- that is, the number of reserved seats are allotted to a party in proportion to the general seats won by the party.

Alongside the general election, members will also be elected for the provincial assemblies: For 297 general seats in Punjab, 130 in Sindh, 99 in Khyber Pakhtunkhwa, and 65 in Balochistan. 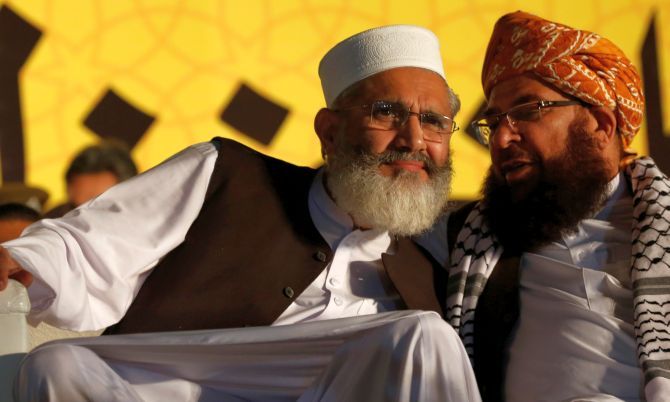 IMAGE: Siraj ul Haq (left) leader of the Muttahida Majlis-e-Amal, a coalition between religious-political parties, listens to Maulana Abdul Ghafoor Haideri, as they are attend a campaign rally, ahead of general elections in Karachi. Photograph: Akhtar Soomro/Reuters

Nawaz Sharif’s Pakistan Muslim League-Nawaz enjoys considerable support in his native Punjab province, the wealthiest and most populous of Pakistan’s four states. However, Nawaz, debarred from contesting elections, has been sentenced to 10 years jail for corruption and could be arrested the minute he returns from London. The party and its campaign are being managed by his family -- daughter Maryam, brother Shahbaz (who might become PM, should PML-N get the numbers) and nephew Hamza.

Given strained ties between the army and the Nawaz administration, the army would prefer PML-N to lose. Many PML-N leaders have joined the Pakistan Tehreek-e-Insaf led by Imran Khan.

In the overall absence of religious parties (they were not given the permission to register and contest elections by the Election Commission of Pakistan), the Tehreek-i-Labbaik Pakistan, a religious outfit, led by a preacher, Khadim Hussain Rizvi, stands out.

The party has fielded over 150 candidates for the National Assembly.  The Muttahida Majlis–e–Amal, an alliance of religious groupings including the Jamaat-e-Islami, has won significant numbers in provinces in the past when it piggybacked other national parties. The presence of religious parties is restricted to pockets and because they are unrecognised, some leaders are contesting as independents.

The Pakistan People’s Party, which has given such leaders as Zulfiqar Ali Bhutto and Benazir Bhutto and has now fielded Bilawal Bhutto and Asif Zardari, is a setting sun. Even the Sind region, which it once dominated, has been taken over by other actors.

The actors
Most analysts agree this election is Imran’s last chance at making a bid for Pakistan’s top job. The PTI has made impressive inroads into Punjab, as seen in numerous recent by-elections.

However, the consensus is that on its own, the PTI does not have the wherewithal to form a government -- it will have to enter a coalition with other parties. This will suit the Inter Services Intelligence and the army because they will have a greater leverage in influencing policy with a weak and inexperienced politician as prime minister.

The PML-N, on the other hand, is beset with confusion and crossed wires in the chain of command. There are reports of differences between Nawaz and Shahbaz. A family struggle, in the absence of paterfamilias Nawaz is taking a toll. Nawaz would have liked to see daughter Maryam holding the reins of the party, but that is now not possible, given the seven-year jail term to which she has been sentenced for corruption. This means the field is free for Shahbaz and his supporters. The PML-N, for instance, has promised to raise the gross domestic product rate, reduce the budget deficit, develop socio-economic zones to boost industrial production and use the China Pakistan Economic Corridor projects to enhance access to domestic and international markets, besides creating 2 million jobs every year.

The PTI (whose spokesman Asad Umar will be a key figure in framing the economic policy if the party comes to power) has promised a digital policy for transforming Pakistan into a knowledge economy and adopting the Information Technology route to increase exports and job creation. Its main plank is eradicating corruption. The PPP has promised equity.

The India factor
India is hardly present in election speeches but it remains a factor in the election. Bilawal has described Nawaz as “Modi ka yaar (a friend of Modi)” in one of his speeches, making it clear who the enemy is. Shireen Mazari of the PTI has promised if voted to power, her party will “be ready to go to any extent to respond to Indian aggression”.

Other worries
Pakistan has other things on its mind as it heads into elections. Cronyism, corruption, and civil-military relations dominate the discourse. The economic meltdown and the CPEC have given rise to a heated debate on the implications of skewed economic development. But most commentators agree that when it comes to politics, nationalism trumps economic crisis every time.