The White House has refused any cooperation by United States President Donald Trump in the Democrats' impeachment investigation, saying the efforts being made by the opposition is unconstitutional and an attempt to overturn the democratic process. 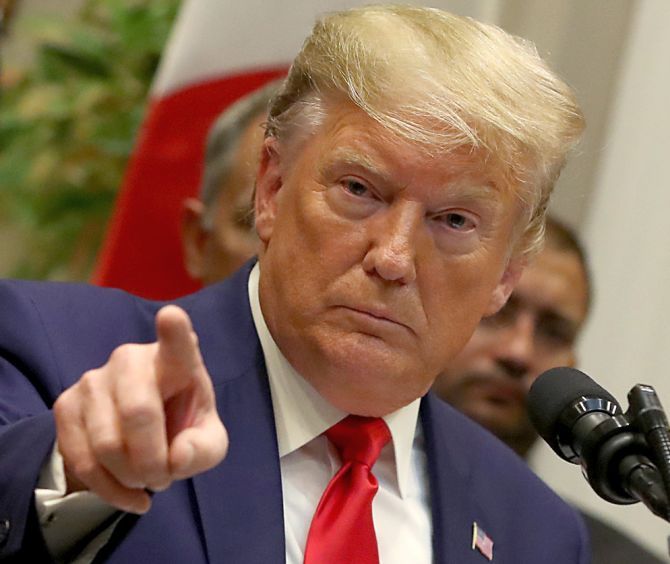 IMAGE: Democrats in the US House of Representatives are examining whether there are grounds to impeach Trump, a Republican, based on a whistleblower's account that said he asked Ukrainian President Zelenskiy in a July 25 phone call to help investigate Democratic political rival Joe Biden. Photograph: Mark Wilson/Getty Images

"The president has done nothing wrong and the Democrats know it. For purely political reasons, the Democrats have decided their desire to overturn the outcome of the 2016 election allows them to conduct a so-called impeachment inquiry that ignores the fundamental rights guaranteed to every American," she said.

"These partisan proceedings are an affront to the Constitution-as they are being held behind closed doors and deny the President the right to call witnesses, to cross-examine witnesses, to have access to evidence, and many other basic rights," she said soon after the White House sent a letter to the Democratic leaders in the House of Representatives informing them of the decision of the Trump Administration.

Democrats in the US House of Representatives are examining whether there are grounds to impeach Trump, a Republican, based on a whistleblower's account that said he asked Ukrainian President Zelenskiy in a July 25 phone call to help investigate Democratic political rival Joe Biden.

In the letter, White House counsel Pat Cipollone rejected the allegations against US President Trump terming it baseless and unconstitutional.

“President Trump and his Administration reject your baseless, unconstitutional efforts to overturn the democratic process,” he said in his letter dated October 8, a copy of which was released to the press.

“Your unprecedented actions have left the president with no choice. In order to fulfil his duties to the American people, the Constitution, the Executive Branch, and all future occupants of the Office of the Presidency, President Trump and his Administration cannot participate in your partisan and unconstitutional inquiry under these circumstances,” he said.

Cipollone said Trump is focused on fulfilling his promises to the American people.

"He (Trump) has important work that he must continue on their behalf, both at home and around the world, including continuing strong economic growth, extending historically low levels of unemployment, negotiating trade deals, fixing our broken immigration system, lowering prescription drug prices, and addressing mass shooting violence,” he said.

"We hope that, in light of the many deficiencies we have identified in your proceedings, you will abandon the current invalid efforts to pursue an impeachment inquiry and join the President in focusing on the many important goals that matter to the American people," Cipollene said.

The letter, Grisham said, demonstrates that the Democrats' inquiry lacks any legitimate constitutional foundation, any pretence of fairness, and even the most elementary due process protections.

“Democrats are pursuing purely partisan goals, including influencing the upcoming 2020 election. In the process, they are violating civil liberties and the separation of powers, threatening Executive Branch officials with punishment simply for exercising their constitutional rights and prerogatives,” she alleged.

“All of this violates the Constitution, the rule of law, and every past precedent. For these reasons, the Executive Branch cannot be expected to, and will not participate in, this exercise of partisan political theater,” Grisham said.

Later a senior administration official told reporters that for the first time in America's history, the House of Representatives is now purporting to proceed on an impeachment inquiry against the President without conducting a vote on the House floor.

“This has never happened in the history of the country. There's always been, in every prior inquiry into a presidential impeachment, a vote on the House floor,” the official asserted.

The House is purporting to proceed simply on the basis of a news conference that the Speaker of the House, Nancy Pelosi, had, the official said.

“And that is simply not sufficient to establish the sort of accountability to show the will of the House to embark on this that is required out of due respect for the separation of powers and for the vote of the American people that was taken in the last election,” said the official, who spoke with reporters on condition of anonymity.

The official said even more importantly, the second legal and constitutional flaw is that the House is purporting to proceed without providing any of the due process protections that have been provided in all modern presidential impeachment inquiries in the past.

“They have denied the president the right to cross-examine witnesses, to call witnesses, to receive transcripts as testimony, to have access to evidence, to have counsel present -- all of these. And these have been in the 1970s, in the inquiries into President Nixon; in the late 1990s, the inquiries into impeachment with President Clinton. All these rights were available. It is unprecedented that they are being denied here, and it violates basic due process standards,” the official said.

In addition to that, by failing to have any resolution on the House floor, the House has avoided giving even the minority on the committees the right to subpoena.