When Trump gave special shout out to DDLJ, Sachin, Virat 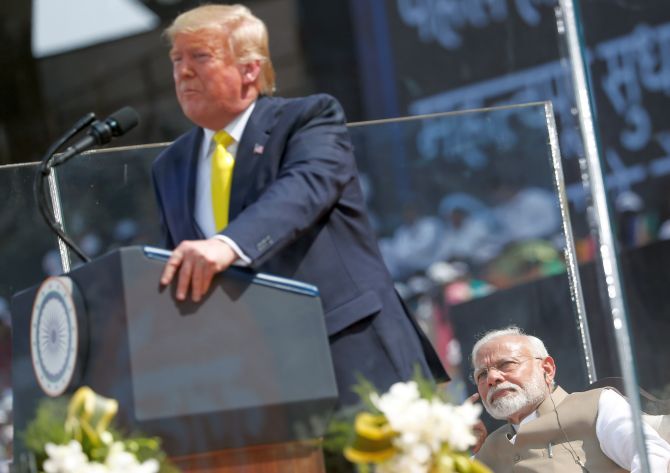 Addressing the 'Namaste Trump' event at the Motera Stadium, the US president said people "take great joy" in watching Bollywood films and understanding Indian culture through them.

"This is the country that produces nearly 2,000 movies a year from the hub of genius and creativity known as Bollywood," he told the gathering of about 100,000 people packed into the stadium.

"All over the planet people take great joy in scenes of bhangra, music and dance, romance and drama, and classic Indian films like 'DDLJ' and 'Sholay'," Trump said.

While the 1975 multi-starrer "Sholay", labelled a "curry western" by many, is an action-adventure film that has stood the test of the decades, the 1995 Shah Rukh Khan-Kajol-led "DDLJ" is an out and out romance.

This is not the first effort by the US president to use popular culture to strike a chord with movie loving Indians.

Ahead of his maiden visit to India, Trump shared a video in which his face was superimposed on the hit movie-character Baahubali.

"Look so forward to being with my great friends in INDIA!" Trump tweeted on Saturday alongside the 81-second clip.

On a tweet complimenting the movie for celebrating a same-sex love story on the celluloid, Trump last week commented "great".

Former US president Barack Obama also referenced "DDLJ" during his 2015 visit to India when he quoted Shah Rukh's famous dialogue from the iconic film.

"Last celebration here we celebrated festival of lights in Mumbai. We danced with some children. Unfortunately, we were not able to schedule any dancing in this visit. 'Senorita, bade bade desho mein'... You know what I mean," Obama said while addressing a town hall event in Delhi.

US President Donald Trump gave a special shout out to Indian cricket legends Sachin Tendulkar and Virat Kohli while speaking at the Motera stadium, as part of Namaste Trump event.

As soon as Trump mentioned the names of the two biggest cricketers to come out from India, the entire Motera Stadium erupted in joy and a loud cheer.

Even India's Prime Minister Narendra Modi was seen having a big smile when the names of Tendulkar and Kohli were mentioned.