'When mother kisses son, is it sex?': Manjhi backs Azam 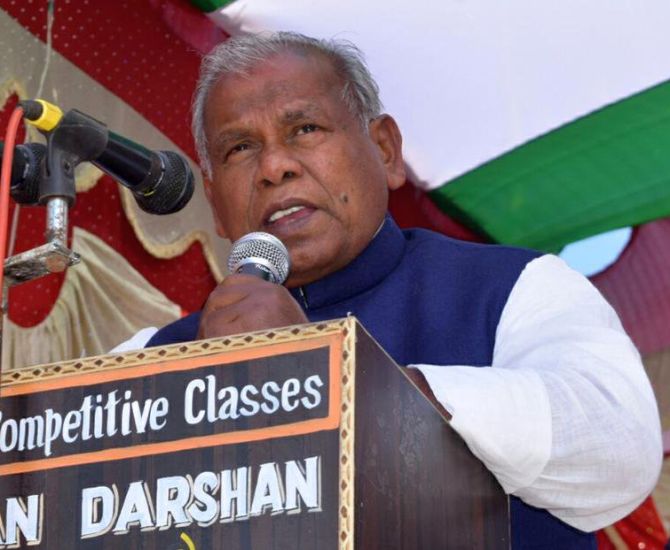 "When brothers and sisters, mothers and sons meet and plant a kiss by way of affection, the gesture is not seen as having sexual overtones. Azam Khan's words are not being taken in the right spirit," Manjhi told reporters.

The Hindustani Awam Morcha leader said Azam need not resign but should tender an apology to put an end to the matter.

"I therefore hold the opinion that he need not resign but since all parties have objections he should tender an apology and be done with the matter," Manjhi, who was on a tour of Newada, said.

Participating in the debate on the triple talaq bill on Thursday in Lok Sabha, Khan had referred to the intervention of Union Minister Mukhtar Abbas Naqvi and read out a couplet "... tu idhar-udhar ki baat na kar ..." (do not divert from the topic).

At this, Rama Devi, who was presiding over the proceedings, asked Khan not to "look here and there" and address the Chair.

To this, the SP member made sexist remarks at the Chair, triggering acrimonious scenes.

The remarks were expunged from the records.

Members in Lok Sabha condemned the remarks by Khan against the Bihar MP and demanded exemplary action against him.

Khan was informed on Friday to appear before Lok Sabha Speaker Om Birla on July 29 and tender an unconditional apology in the House, sources had said.

Rama Devi had said that an apology was not enough and Khan should be suspended from the House for five years.