Terming the denial of entry to "unarmed women" into the Sabarimala temple as a "sad spectacle", the minority verdict by the Supreme Court on Thursday held that enforcement of its 2018 order is "non-negotiable" and no person or authority can flout it. 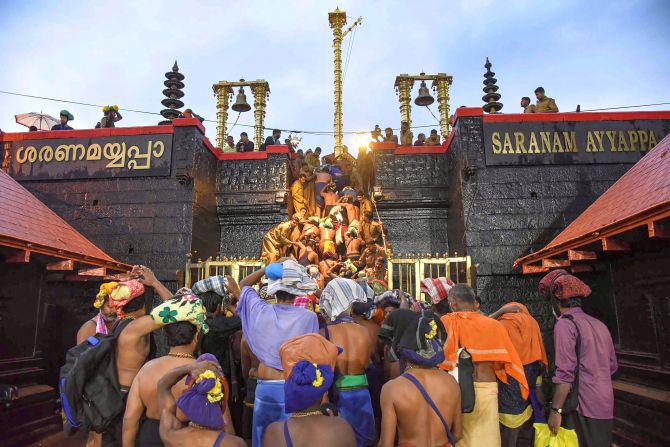 Justice R F Nariman, who penned the minority view on behalf of himself and Justice D Y Chandrachud, said the Constitution places a "non-negotiable obligation" on authorities to enforce the judgements as it was necessary to preserve rule of law and directed strict compliance of the September 2018 decision allowing girls and women of all ages to enter the hill-top shrine in Kerala.

"If those whose duty it is to comply were to have a discretion on whether or not to abide by a decision of the court, the rule of law would be set at naught. Compliance is not a matter of option. If it were to be so, the authority of the court could be diluted at the option of those who are bound to comply with its verdicts," it said.

"Today, it is no longer open to any person or authority to openly flout a Supreme Court judgement or order, given the constitutional scheme," the verdict said.

However, the majority verdict, written by Chief Justice Ranjan Gogoi for himself and justices A M Khanwilkar and Indu Malhotra, decided to refer to a larger 7-judge bench the pleas seeking review of the 2018 judgement allowing women and girls of all ages to enter the temple which is all set to open on November 17.

As the majority verdict kept the review pleas pending for a 7-judge bench and did not stay its September 28, 2018 majority judgement, girls and women of all age groups will be entitled to undertake the pilgrimage to the shrine.

Justice Nariman said it was restating constitutional duties "in the light of the sad spectacle of unarmed women between the ages of 10 and 50 being thwarted in the exercise of their fundamental right of worship at the temple".

It further said that whoever does not act in compliance of apex court judgements, "does so at his peril".

"... So far as ministers, both central and state, and MPs and MLAs are concerned, they would violate their constitutional oath to uphold, preserve, and defend the Constitution.

"So far as the citizens of India are concerned, we would do well to remind them of the fundamental duties of citizens laid down in Article 51A of the Constitution," it said.

"After all, in India's tryst with destiny, we have chosen to be wedded to the rule of law as laid down by the Constitution of India. Let every person remember that the 'holy book' is the Constitution, and it is with this book in hand that the citizens of India march together as a nation, so that they may move forward in all spheres of human endeavour to achieve the great goals set out by this 'Magna Carta' or Great Charter of India," the verdict said.

It also directed the Kerala government to comply with the September 2018 decision of the apex court by widely publicising through television and newspapers.

It further directed the state government to take steps to secure the confidence of the community in order to ensure the fulfilment of constitutional values.

"The state government may have broad-based consultations with representatives of all affected interests so that the modalities devised for implementing the judgment of the court meet the genuine concerns of all segments of the community. Organised acts of resistance to thwart the implementation of this judgment must be put down firmly.

"Yet in devising modalities for compliance, a solution which provides lasting peace, while at the same time reaffirming human dignity as a fundamental constitutional value, should be adopted. Consistent with the duties inherent in it, we expect the state government to ensure that the rule of law is preserved," it said.

Justices Nariman and Chandrachud also disagreed with the majority view to refer to a larger bench the review and fresh pleas challenging the September 2018 decision of the apex court as well as other matters pertaining to discrimination faced by women of other religions.

"As and when the other matters are heard, the bench hearing those matters may well refer to our judgment September 28, 2018, and may either apply such judgment, distinguish such judgment, or refer an issue/issues which arise from the said judgment for determination by a larger bench.

"What is before us is only the narrow question as to whether grounds for review and grounds for filing of the writ petitions have been made out qua the judgement," it said.

The minority verdict noted that the review pleas and fresh petitions were "devoted" to whether the practice of excluding women between the ages of 10 and 50 from Sabarimala would constitute an essential religious practice.

It said this was a ground that "must be rejected", as "there is no error apparent" and the point, which was argued extensively before the earlier Constitution bench, was being reargued in review.

"Extreme arguments were made by some counsel stating that belief and faith are not judicially reviewable by courts, and that this court cannot interfere by stating that a particular section of persons shall not hold a particular belief and act in accordance thereto. Such arguments need to be rejected out of hand. Not only do they not constitute 'errors apparent', but are arguments that fly in the face of Article 25," the court said.

It also rejected the "emotive" argument that women being kept out of Sabarimala as the deity was a 'Naisthik Brahmachari' (perennial celibate), who would be disturbed by the presence of women between the ages of 10 and 50, as he has undertaken a vow of celibacy, saying the point was being re-argued.