Are you planning to use thick needle, Modi had asked nurse

Prime Minister Narendra Modi asked the nurses administering the COVID-19 vaccine to him on Monday whether they were planning to use some special thick needle as politicians are known to be 'very thick-skinned', drawing laughter from the medical staff who immediately felt at ease. 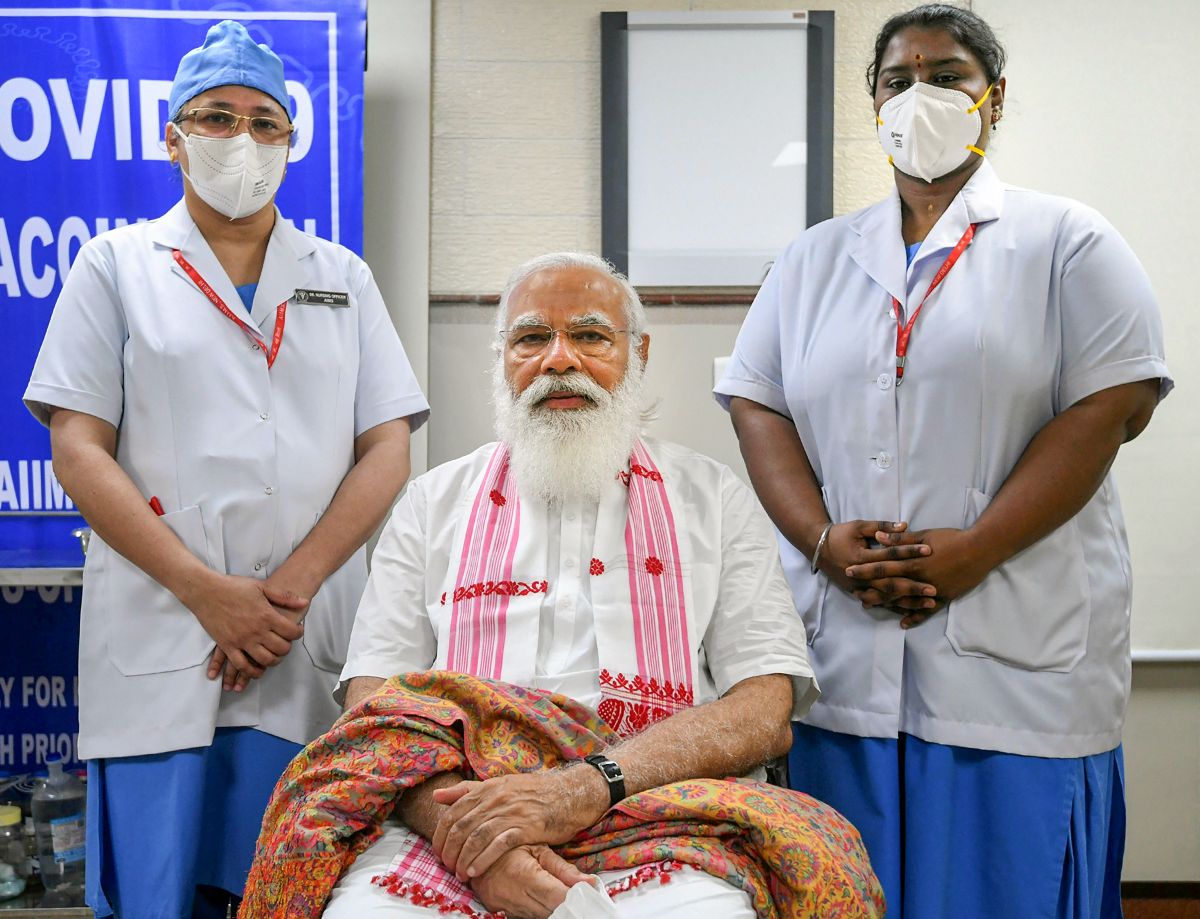 Prime Minister Modi took his first dose of the COVID-19 vaccine at All India Institute of Medical Sciences in New Delhi.

Another nurse, Rosamma Anil, was also there to assist in the vaccine administering process.

"When Prime Minister Modi arrived early in the morning, it was natural that the medical staff at AIIMS was perhaps a bit overawed by the situation," a source said.

Realising this, the prime minister instantly struck a conversation with them, asking their names and about their native places to put them at ease, they said.

Then to lighten up the atmosphere, he asked the nurses whether they would use a needle meant for veterinary purposes. The nurses said no but did not fully understand the question.

Politicians are known to be 'very thick-skinned', PM Modi quipped and asked if they were planning to use some special thick needle for him, according to the sources.

On hearing this, the nurses not only laughed but were also put at ease, the sources said.

The prime minister also posted a picture of himself taking the first dose of the vaccine with a smile on his face.

Nurses Niveda and Rosamma Anil from Kerala can be seen in the picture.

The two nurses are also seen in other pictures released. In one of them, they are seen standing next to the prime minister posing for the photograph.

In another picture, while Niveda is seen injecting the vaccine, the other nurse is seen helping in the process.

Niveda said she has been working with the AIIMS in New Delhi for three years and is currently posted at the vaccine centre.

"We found out PM sir is coming for vaccination this morning. When I came here only then I got to know that sir is coming. It was really nice to meet sir," she said.

He has been administered the first dose of Bharat Biotech's COVAXIN and will need his second dose in 28 days, the nurse said.

"He talked with us, asked us from where we belong," she said.

Rosamma Anil, the nurse from Kerala, said it was very nice to meet the prime minister and added that he was 'very comfortable'.

"Today is the happiest day of my life because our Prime Minister Modi ji came to our AIIMS hospital to get a vaccine. He greeted us with folded hands, saying 'vanakkam'," she said.

"He (Modi) was under observation for 30 minutes after taking the COVAXIN injection. Sir had no complications. He was very happy," Rosamma Anil said.

"Before leaving the hospital after half an hour, sir came to us again with folded hands, saying thank you and vanakkam," she said.

AIIMS chief Dr Randeep Guleria said Prime Minister Modi's move to take the first dose of COVID-19 vaccine on the very first day of India opening up the inoculation drive for senior citizens and those aged 45 and above with comorbidities should eliminate any hesitancy from the minds of people about the vaccine.

The government had announced on Wednesday that everyone above 60 years of age and those over 45 years with comorbidities will be able to get the COVID-19 vaccine from March 1 for free at government facilities and for a charge at many private hospitals.

Citizens will be able to register and book an appointment for vaccination, anytime and anywhere, using the Co-WIN 2.0 portal or through other IT applications such as Aarogya Setu.