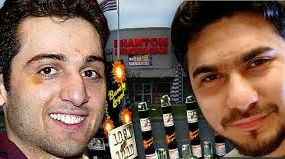 Boston Marathon bomber Tamerlan Tsarnaev walked into a New Hampshire fireworks store two months before his deadly attack and asked for the "biggest and loudest" kit in the store -- then got another set free.

Tamerlan, 26, was pronounced dead on Friday after suffering shrapnel and bullet wounds in a gunfight with police.

Tamerlan's brother 19-year-old Dzhokhar was later arrested in connection with the bombings that claimed three lives and injured more than 200 people last Monday.

Dzhokhar has been charged with conspiring to use "weapon of mass destruction" and faces death penalty if convicted.

"After our Times Square experience, we said, 'It can't happen twice'". But it did.

Weimer searched his company's sales records last week and discovered Tsarnaev, 26, came into his Phantom Fireworks on February 6 and was helped by a female store clerk.

"Like most 99 per cent of the men who come in, he asked 'What's the biggest and loudest thing you have'," Weimer said.

The clerk directed him to a $199.99 "Lock and Load" kit, which contains four launch tubes and 24 black-powder-packed shells.

The kits are advertised by the company as "barely legal".

Tamerlan paid cash for the pyrotechnics.

He said each shell contains roughly 30 grammes of black powder, meaning the bombers would have more than three pounds of explosive power.

That's enough for at least one bomb, experts said.

Weimer said he contacted the FBI as soon as he discovered sales records with Tsarnaev name on them. He said the transaction did not initially raise red flags, calling "a totally unremarkable sale".

The attempted car bombing of Times Square on May 1, 2010, was a planned terrorist attack that was foiled when two street vendors discovered the car bomb and alerted a New York Police Department patrolman to the car bomb threat after they spotted smoke coming from a vehicle.