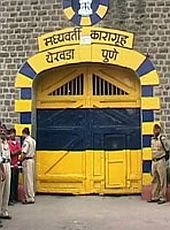 Devidas Deshpande narrates what transpired in the run-up to Operation X -- as terrorist Ajmal Kasab's hanging was codenamed.

Ajmal Kasab was awakened in the wee hours of Wednesday.

About half an hour was spent in bath and prayers. He was then given new clothes to wear.

Between 5.30 am and 6 am, top police officers, including Inspector General of Prisons (Maharashtra) Meeran Borwankar and Jail Superintendent Yogesh Desai, reached the Yerawada prison in Pune.

Kasab was first taken for a medical check-up. The jail doctor checked him and issued a fitness certificate as per the jail manual.

A hangman traveled from Nagpur since Yerawada prison does not have a hangman.

Kasab was then taken to the special cell where the sentence was to be carried out.

Officials present said Kasab's face showed no remorse as he was taken to the cell.

Police sources said he was asked two questions: Do you have any last wish? Do you want your belongings to be given to someone?

Kasab replied in the negative to both questions. He neither expressed his last wish nor did he want his belongings to be given to others.

Officials said his last words were, 'Allah kasam, aisi ghalati dobara nahi hogi (I swear by Allah, I will never commit such a wrong again).

At exactly 7.30 am, the lever was pushed to hang Kasab. Ten minutes later the medical officer declared the terrorist dead.

At 7.46 am, police officers conveyed the message to Maharashtra Home Minister R R Patil that 'Operation X is over' and from then the news gained wings.

Kasab's corpse was buried on the jail premises itself. Within half an hour, people thronged the prison gates, celebrating, distributing sweets.