What is the logic behind Andhra Pradesh division

Is Hyderabad the reason Telangana wants separation from Andhra Pradesh? Or has perceived backwardness of the Telangana region fuelled demand for a separate state? Mayank Mishra reports 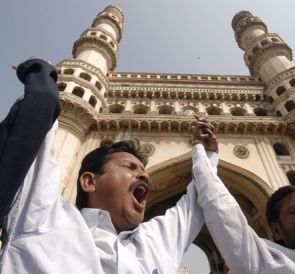 On August 19, 1953, the then member of Parliament from Nizamabad in Andhra Pradesh said in the Lok Sabha: "Unfortunately, in the whole of Andhra, that is the 11 districts, there is no single town, which, I think, would be worth calling even a district centre. Fortunately, in Hyderabad, we have got a readymade capital, one of the best cities in the whole of India, very good cement roads, many buildings and all the amenities of city life. Therefore, if a decision about Hyderabad city could have been taken, Hyderabad city would have been a very easy and ready capital and so many difficulties and hurdles would have been easily overcome." (Quoted in Srikrishna Commission report, 2010.)

The city of Hyderabad used to fascinate the people of Andhra Pradesh then and the fascination continues till date. For, Hyderabad not only has very "good cement roads and many buildings" but is the engine that drives the economy of the state. It contributes as much as eight per cent to the state's gross domestic product, is home to top educational institutions, has a per capita income that is almost double the state average, contributes 5.51 per cent of the state's industrial output, generates 14.11 per cent of state's total services and possesses a thriving real estate and IT sector.

Is Hyderabad the reason Telangana wants separation from the rest of Andhra Pradesh as the region has geographical claim to the capital city? Or has perceived backwardness of the Telangana region fuelled demand for a separate state?Former bureaucrat and now head of Lok Satta Party Jayaprakash Narayan is not way off the mark when he says: "There is no economic reason behind the division of the state. It is essentially a political issue. If that is not the case, why did the Centre take the decision in the manner in which it did, against the will of 60-70 per cent people of the state."

Ironically, as the Srikrishna Commission report notes, while the demand for a separate state of Telangana was made in the 1960s and 1970s, it gained momentum after the state made rapid progress for almost three decades. “Indeed, it could arguably be said that this very progress has led Telangana to revive the demand for a separate state in order to gain greater political space and to bridge more rapidly the remaining, though diminishing, disparities," the report observes.

A detailed analysis of the Srikrishna report clearly establishes the diminishing disparities among the three regions of the state -- Coastal Andhra, Rayalaseema and Telangana. A recent paper by G Gangadhar Rao, director, Agro Economic Research Centre, Andhra University, Visakhapatnam, takes the argument further with updated data. In terms of per capita income, while Telangana (with or without Hyderabad) and Coastal Andhra top the state average, Rayalaseema is a clear laggard.

Rao told Business Standard that following the division, "Telangana will be a net gainer of revenue worth Rs 19,000 every year whereas Coastal Andhra and Rayalaseema would suffer a loss of revenue to the tune of Rs 11,000 crore and Rs 7,000 crore, respectively." Is it possible for the Centre to compensate for such a loss of revenue to would-be Seemandhra, asks Rao.

Telangana's revenue generating power comes from Hyderabad. However, even without Hyderabad, the region can compete with the rest of the state on all parameters. If backwardness is not the reason, what is? Why did the people take to the streets while demanding a separate state of Telangana? Srikrishna commission report offers some answers.

"So far as the income change dynamics is concerned, the coastal Andhra region has moved over to a more equitable distribution of income where the deprived, the wage labourers, and the SCs/STs/minorities have gained income during the decades of 1990 and 2000; whereas these communities were not able to improve their household income and living conditions in Telangana.

This analysis provides credence to the fact that the most of the deprived communities in Telangana are facing hardship and therefore are vulnerable to mass mobilisation on one pretext or the other, including political mobilisation with promises which may or may not be met," the report observes.

So, relative deprivation of a section of the population is the reason behind protest movements for a separate Telangana, led by the same set of people who would have perhaps ensured that the deprived stayed deprived! And leaders of the movement have been clearly driven by the ambition to become chief minister and ministers. Andhra Pradesh has been in existence for 57 years now. Leaders of Telangana region occupied the chief minister's chair all of four times spanning almost 12 years. Two of the prominent ones being M Channa Reddy and P V Narasimha Rao, with the latter subsequently becoming the prime minister as well.

However, Andhra Pradesh knows better that the chief minister from a particular region does not ensure overall development of that region. Otherwise, how will one explain the relative backwardness of Rayalaseema, whose leaders have occupied the CM's chair for 28 long years?

While leaders from the Telangana region are eyeing ministerial berths and the chief minister's chair, the fear of losing Hyderabad is now driving protests in Seemandhra.

The bill to carve out Telangana was passed by the Lok Sabha on Tuesday.