The distraught family of Viswanatha Gurukkal, who was attacked by a group of youngsters, blames some political parties for taking up anti-Brahminism as their poll plank. Shobha Warrier/Rediff.com reports. 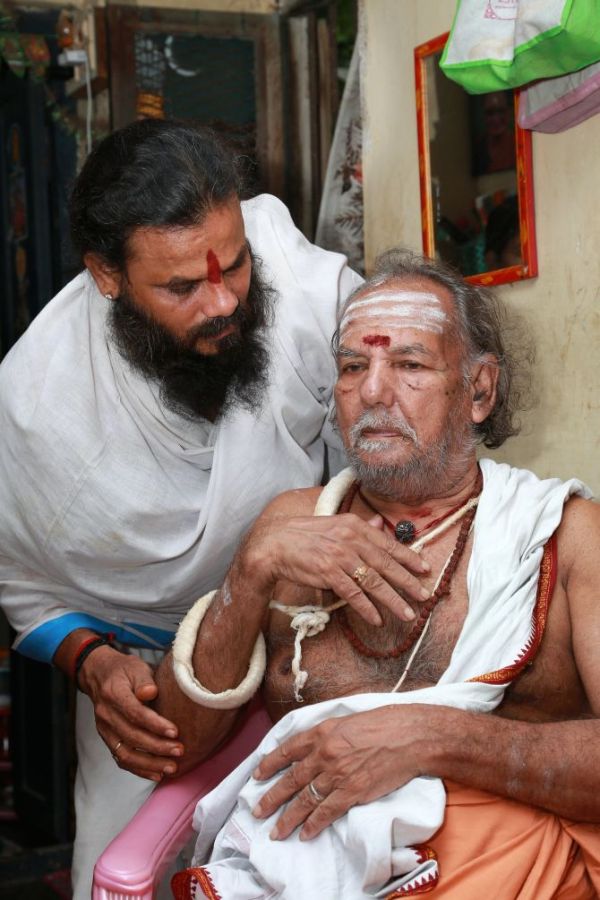 Image: Viswanatha Gurukkal's second son Mangala Nathan took his father to the police station to file an FIR before taking him to the doctor. Photograph: Sreeram Selvaraj

'I was a priest in the Mangalambika temple in my village for 40 years. I was respected and loved in my village. Today I feel insulted and humiliated'

Viswanatha Gurukkal is 78 years old, suffers from diabetes, high blood pressure, cholesterol, and loss of hearing. He also has a weak heart and walks haltingly.

Fifteen years ago, after he retired from being a full-time priest in his quiet, serene village near Villupuram, he moved to Chennai to be near his two sons. From then on, he has spent each morning and evening slowly walking from his small house in an agraharam (a Brahmin enclave) to the nearby Karneswara temple to pray and sometimes help his elder son, Shanmugha Gurukkal, who works there as a priest. He does so both because his doctor advised him to walk on a daily basis and because he cannot imagine passing a day without visiting a temple.

On April 19, Viswanatha Gurukkal, as usual, sauntered back home at 7 in the evening, silently muttering prayers to himself. The street was quite dark and deserted by then. He had reached the front of his house when eight-nine young men approached him on three motorcycles. They stopped their bikes and surrounded him. They shouted ‘Periyar Vaazhga’ (Long live Periyar, the father of the Dravidian movement) and one of them slapped Gurukkal hard.

Then they pulled his veshti and pushed him so hard that he lost his balance and fell down on the road. In the meantime, one of the men cut his ‘poonal’ (sacred thread) and shouted ‘Periyar Vaazhga’ once again. As he lay on the road writhing in pain, unable to understand what was happening to him, they fled the scene.

The noise alerted some of Gurukkal’s neighbours who rushed out of their homes and saw him lying on the road. They helped him up and took him inside his house. 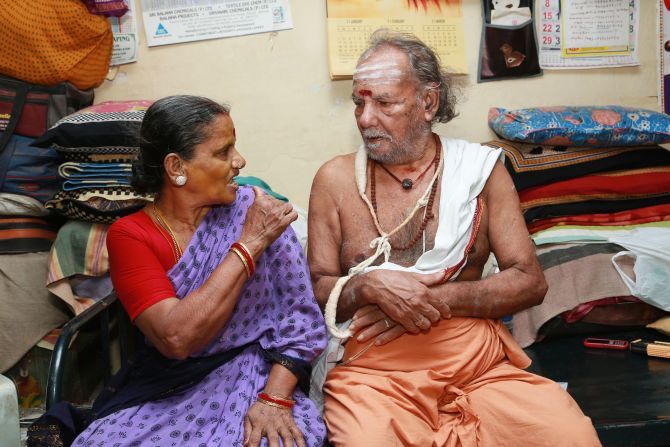 “I was not at home when this happened. When I came in, I saw him sitting on the floor, shaken and shivering all over. I saw tears streaming from his eyes. I could sense that he was in terrible pain. I couldn’t understand what had happened to him. I thought he must have fallen down on the road. Later, I understood it was not the physical pain but the mental anguish that had brought tears to his eyes,” his 76-year-old wife Sakunthala said.

In no time, both his sons were by his side. Mangala Nathan, his second son, a priest who conducts launch pujas for the Tamil film industry, decided to take him to the nearest police station and file an FIR before taking him to the doctor.

“Later we came to know that the attackers belong to a political party that derive pleasure in attacking Brahmins. I do not know why they target old men. Three old priests were attacked the same day at different places but nobody dared make a police complaint. I was not ready to let it go. I took my father to the police station and filed an FIR. I must say the police were extremely helpful and understanding. Before cutting the ‘poonal’ of old Brahmins, the group had cut the ‘thaali’ (mangalsutra) off of some women,” Mangala Nathan said.

Mangala Nathan, 46, remembers seeing such incidents in the early '80s in Chennai. “My father had only experienced the non-political quiet life in a village. In the '80s, as a teenager, I had seen goons cutting the kudumi (the tuft on the head) of Brahmins in many places in Vadapalani. Only after MGR (M G Ramachandran) became chief minister that these kind of incidents stopped occurring.

“In the 15 years of MGR rule, not a single incident of this sort happened here. For the first time after the Dravidian movement started, we felt safe. After that, till now, I didn’t see any anti-Brahmin movement in Tamil Nadu but unfortunately, it has sprung up again with some political parties taking up anti-Brahminism as their major plank. They want an issue to come to the forefront and this is one issue they feel they can use that can attract attention.

"I have performed pujas for 1,500 films myself. What happened to my father was more like what happens in films -- so shocking and painful. My father has not slept properly after the incident. It is heart-breaking to see him sit alone and weep. Let’s forget the fact that he is a Brahmin and a priest, he is an old man. Is it right to treat an old man like this? That is my question,” Mangala Nathan said. 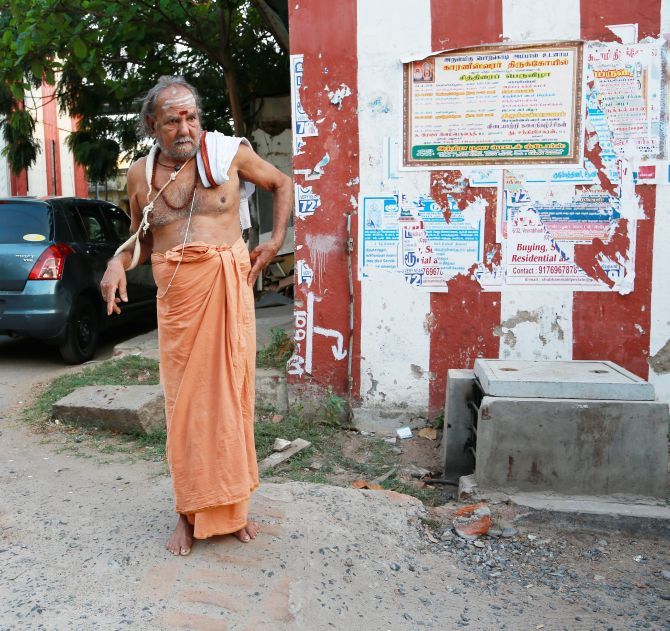 Image: The 78-year-old Viswanatha Gurukkal outside his home in Chennai. Photograph: Sreeram Selvaraj.

Gurukkal's daughter, who lives in Salem, asks of the attackers, “Why did you pick on my old father? Why don’t you pick on people who can resist your action? What harm has he done to you? I have nothing to do with politics but he is my father, he is sick and he is so old. Why do you have to insult my father like this? He is so old that he can’t even lift his hands to stop you from hitting him. It is so painful to see what my father has gone through now. He has performed so many pujas for so many people and conducted so many marriages. He hasn’t done a single bad thing in his life. Does he deserve this humiliation?”

Viswanatha Gurukkal, who was listening to his children speak, said in his quivering voice, “It all happened in a minute and I just couldn’t recollect anything for some time. I only remember some drunken youngsters coming in a bike very fast and surrounding me. They twisted my right hand before slapping me. I couldn’t understand why someone should beat me and do something like this. I have never hurt anyone in my life...”

The very thought of those scary moments shook him, even though more than a week had passed since the incident. 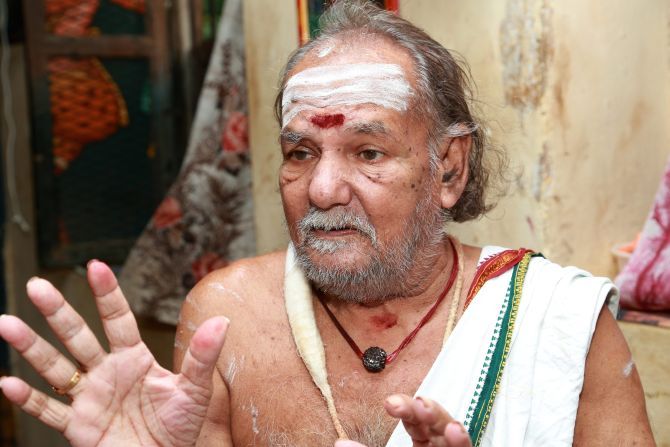 As we were about to leave, he folded his hands and said, “I was a priest in the Mangalambika temple in my village for 40 years. I was respected and loved in my village. Today I feel insulted and humiliated. What have I done to deserve this? Please do something so that no other old man has to face this kind of humiliation.”