Many said that scrapping of Article 370, which gave special status to the state, could lead to change in its Muslim-majority identity. 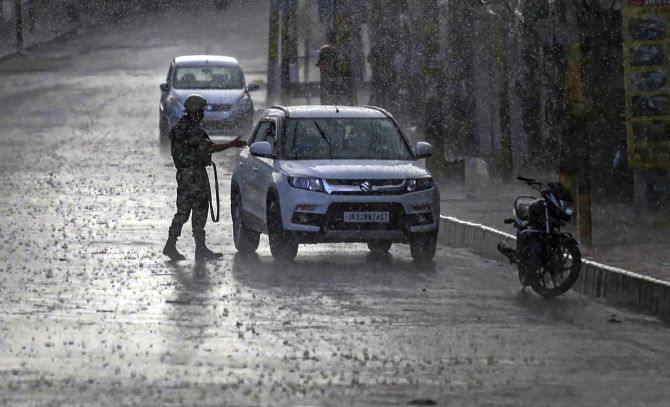 IMAGE: A paramilitary soldier stops a commuter during strike and restrictions, as it rains in Jammu. Restrictions and night curfews were imposed in several districts of Jammu and Kashmir as the Valley remained on edge with authorities stepping up security deployment. Photograph: PTI Photo

People of Kashmir on Monday expressed apprehensions about a new cycle of violence in the Valley, with many saying that scrapping of Article 370, which gave special status to the state, could lead to change in its Muslim-majority identity.

"We are shocked by the decision and it left us disappointed because our sentiments were attached with this Article... Its scrapping means that the state will lose its Muslim-majority character," said 50-year-old Farooq Ahmad Shah, a resident of Srinagar who was visiting Jammu.

He said though the state's ruling parties rendered the Article a mere skeleton over the last 70 years in collusion with the different governments at the centre, its scrapping is bound to provoke the people to vent their anger.

"How long they will keep us under house arrest?" asked Arshid Warsi, a man in his 20s from the Valley who was also visiting the city.

Revoking Article 370 does not mean "we cannot express our resentment", he said.

A school teacher, who wished not to be named, blamed the state's mainstream parties for the "current crisis".

"Today we feel we have lost our identity and it is very unfortunate that the government has taken a decision which is going to create more resentment among the masses rather than bringing peace," she said.

For businessman Jaleel Ahmad Bhat, the uncertainty in the Valley meant closure of his establishment indefinitely and loss of bread and butter.

"We don't know how the situation will develop after the curfew-like restrictions are withdrawn. We feel we are heading for worst of times," he said.

He expressed disappointment over snapping of phone and internet connectivity and said people in the Valley have totally been disconnected from the outside world.

"My two children are studying outside the state and there is no contact with them. I know they will be worried about the situation here and I also don't know how they are doing," Bhat, who was in Jammu, said.

Fatima Bano, a middle-aged entrepreneur, said she has been praying for normalcy ever since she came to know about the government's decision to revoke Article 370.

"Will revoking Article 370 end decades-long unrest in Kashmir? I don't believe in this theory," she said, asserting that Article 370 or Article 35A was no hindrance for the return of Kashmiri migrant Pandits to their homes as they have been natives of the Valley for centuries.

"It was the law and order situation which is the biggest hurdle in their return," she added.

Meeting a long-held Bharatiya Janata Party promise, the government moved a resolution in the Rajya Sabha on Monday that Article 370, which allowed Jammu and Kashmir to have its own constitution among other privileges, will no longer be applicable.

Union Home Minister Amit Shah also moved a bill proposing bifurcation of the state into the union territories of Jammu and Kashmir, and Ladakh.

Kashmiris who have moved to Jammu permanently were also worried about their families back home after the government made its decision on Article 370 public.

"We don't know what is happening in Kashmir. I have talked to my family there last night and came to know about heavy deployment of forces," Nusrat, a housewife, said.

Fayaz Ahmad Dar, who was returning from Delhi after shopping for his sister's wedding, said the developments in the Valley have left him heartbroken.

"My younger sister is getting married on August 13 and we have made all necessary arrangements. I don't know whether the marriage will take place or not given the sudden developments over the past few weeks," he said.

Massive security deployment was made with prohibitory orders clamped across the state before the government announced the decision to scrap Article 370.

As per the article, except for defence, foreign affairs, finance and communications, Parliament needs the state government's concurrence for applying all other laws.