Mamata Banerjee fended off a spirited challenge by a resurgent Bharatiya Janata Party in West Bengal with a landslide victory for her Trinamool Congress on Sunday for a third consecutive term and the saffron party and the Left Democratic Front were poised to form government again in Assam and Kerala respectively while the Dravida Munnetra Kazhagam stormed back to power in Tamil Nadu after a gap of 10 years. 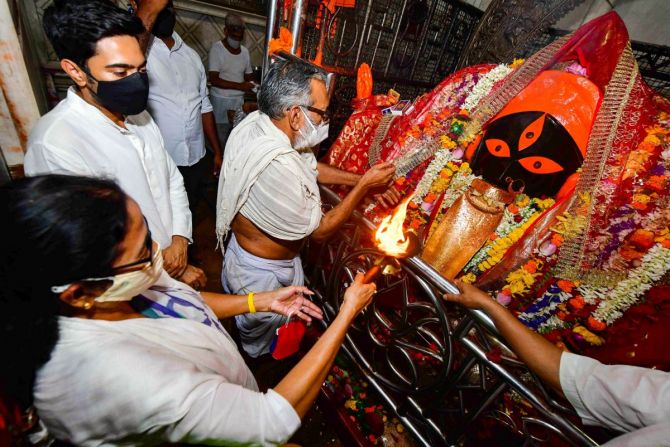 The mercurial Banerjee, however, lost the Nandigram seat in a close fight with BJP candidate and her former lieutenant Suvendu Adhikari.

According to the Election Commission of India (ECI) website updated at 11.15 pm, Adhikari won by a margin of 1,956 votes to retain the prestigious seat. The TMC has demanded a recount.

While the TMC, the BJP and the Communist Party of India (Marxist)-led Left Democratic Front (LDF) decisively beat anti-incumbency in three of the four states and Puducherry that went to polls, the saffron ally All India Anna Dravida Munnetra Kazhagam ceded space to the opposition DMK-led alliance in Tamil Nadu which is set to herald a new sunrise and also rise of the son. 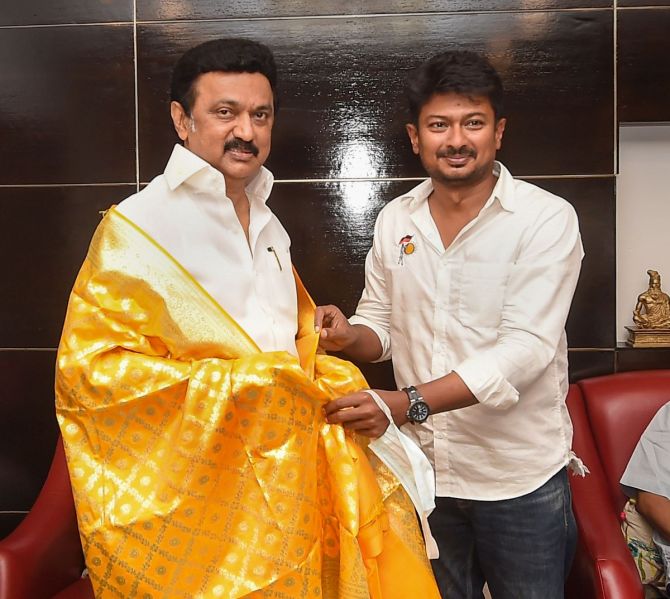 The DMK is led by M K Stalin, son of late DMK founder M Karunanidhi, while 'rising Sun' is the party symbol.

The All India NR Congress-led National Democratic Alliance is set to come to power in the union territory of Puducherry.

The TMC's spectacular win in West Bengal in many ways is seen as a victory of the non-saffron parties who hope to capitalise on the triumph in the eastern state, Tamil Nadu and Kerala to revive attempts to form a Federal front to take on the BJP in the 2024 Lok Sabha polls.

The victories come barely a month after Banerjee wrote to Opposition leaders urging them to unite against the BJP. 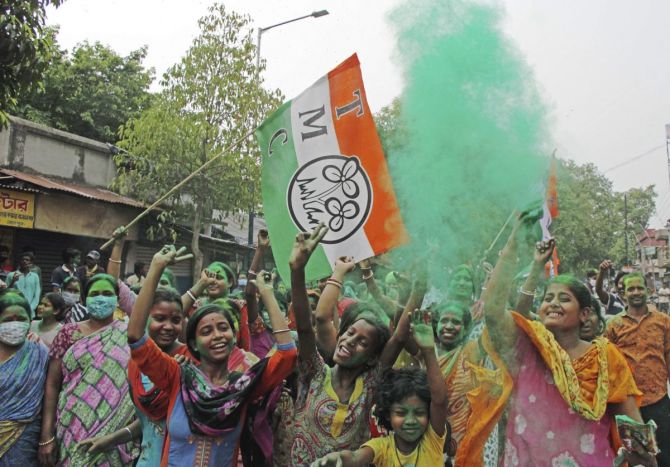 The poll outcome for the BJP comes against the backdrop of the COVID-19 crisis which has posed a massive challenge to the Centre and also the protests by farmers at Delhi borders to roll back the three contentious farm laws.

For the Congress, the main opposition party in the Lok Sabha, the electoral fortunes took another dip as it failed to make a mark in the current round of assembly polls, the only minor consolation being the victory of its ally DMK-led alliance in Tamil Nadu.

The cynosure of the elections, held over March and April as the second wave of the COVID-19 pandemic picked up pace to finally ravage large parts of the country, was the high-stakes, acrimonious TMC-BJP contest in West Bengal. 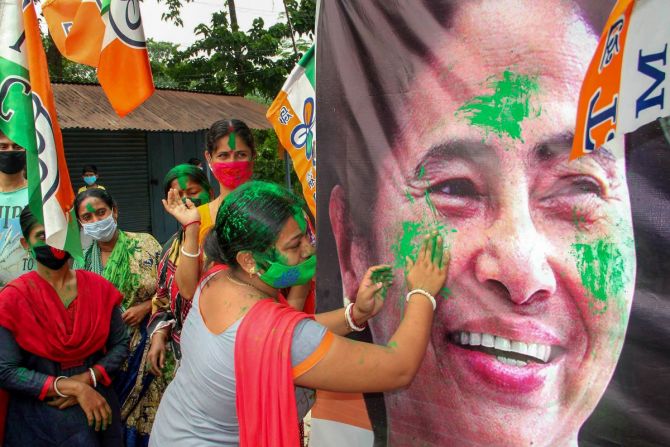 Belying all expectations, the TMC scored a spectacular victory overcoming the might of the BJP after a bitter campaign that had turned into a virtual duel between Chief Minister Banerjee and Prime Minister Modi.

"It is the victory of the people of Bengal, the victory of democracy. Bengal has saved India today. This landslide victory came after fighting against several odds -- the Centre, its machinery, its agencies.

"This victory has saved the humanity," Banerjee said, addressing the press as she stood on her feet for the first time in nearly two months.

The campaigning was marked by images of Banerjee in a wheelchair with a thick cast on her leg after she was injured during electioneering. 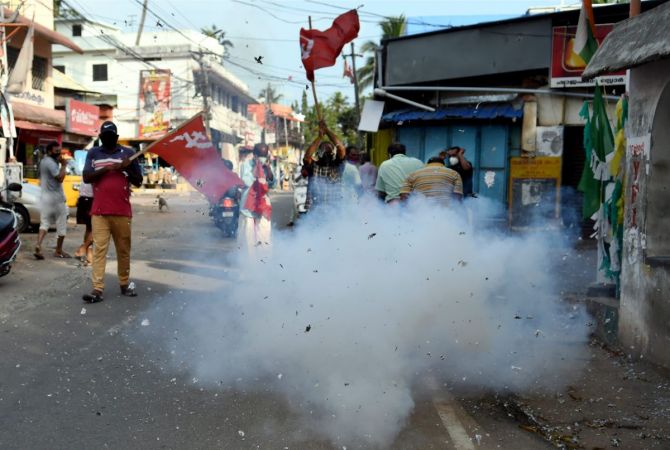 The TMC was poised to get a two-third majority bagging 208 seats and ahead in five in the 292-member house while the BJP won 76 seats and was leading in one.

The BJP had just three seats in the outgoing house.

"I respect the verdict of people of Nandigram, but have got landslide victory in Bengal," Banerjee said.

The TMC supremo added that she would move court against the 'mischief' in Nandigram.

The BJP worked hard to build inroads in West Bengal and fielded its top leaders, including Prime Minister Modi and Union Home Minister Amit Shah, but power in the state proved to be elusive.

The Left parties, which once called the state their bastion, and the Congress were demolished and not even a factor in the eight-phase election.

Senior Congress leader Shashi Tharoor hailed Banerjee for her 'spectacular victory' and said the BJP has met its match in Bengal and lost. 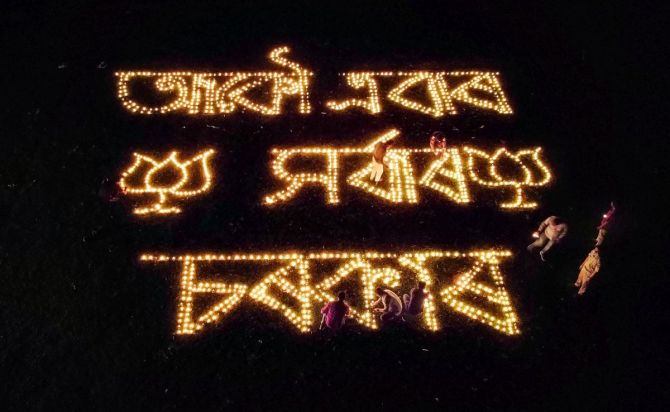 The BJP had reason to smile in Assam where the ruling National Democratic Alliance was ahead of the Congress-led Grand Alliance.

The BJP won or led in a total of 60 seats while its ally Asom Gana Parishad won nine and the United People's Party, Liberal won six in the 126-member House.

"We can say for sure that the BJP will form government in Assam. We are coming back to power with our partners AGP and UPPL," Sonowal told reporters.

In Kerala, the LDF readied for another term, the first time in four decades that the same grouping could form government for the second consecutive time.

The LDF won 93 of the 140 seats, according to the Election Commission.

The UDF has won 40 seats, while the BJP has failed to win any seat.

Among the prominent losers was 'Metroman' E Sreedharan, who had joined the BJP with much fanfare ahead of the elections.

Kerala Chief Minister Pinarayi Vijayan dedicated the historic victory of the LDF to the people and said it proved there was no room for communal politics in the state.

Vijayan's decades long political acumen came to the fore as a combination of factors contributed to LDF's historic victory, including delivery of a string of populist measures like distribution of free foodgrains and provision kits to all people, better management of the COVID-19 situation by gearing up the public health care system and enhanced and prompt pay out of social security pensions.

"I thank the people of Kerala for reposing faith in an unprecedented manner in the way that the previous LDF government tackled all the challenges that the people have faced and also the pandemic scourge. The government gave a Kerala model to the world on how to handle the pandemic," CPI-M general secretary Sitaram Yechury said.

In Tamil Nadu, the DMK alone had won or was leading in 132 of the 234 seats, a feather in its president Stalin's cap.

Its partner Congress won 10 and was ahead in eight, while the ruling AIADMK was likely to end up with just 67 seats.

Both the Dravidian parties went into the election without their stalwarts, J Jayalalithaa for the AIADMK and M Karunanidhi for the DMK.

Tamil Nadu was also the one bright spot for the Congress where the DMK-led opposition alliance, of which it is a part, trounced the AIADMK-BJP coalition. In the rest of the states, it was a story of more losses underscoring its electoral insignificance.

Though the Election Commission had banned victory roadshows and vehicle rallies, crowds of jubilant supporters of various parties could be seen celebrating in various places in violation of Covid norms.

The drumbeats of victory came in the backdrop of an election which will be remembered for vast, crowded rallies -- with most people without proper masks -- amid the pandemic. 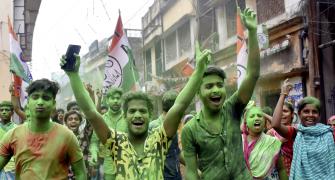 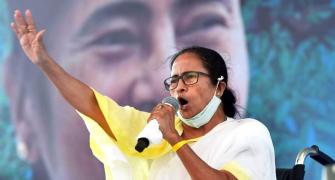 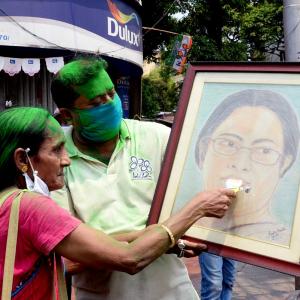 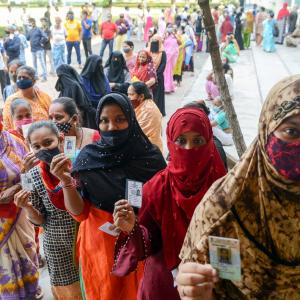