As the farmer agitation against the Centre's three farm laws enters its hundredth day on Saturday, union leaders have asserted that their movement is far from over and they are "going strong". 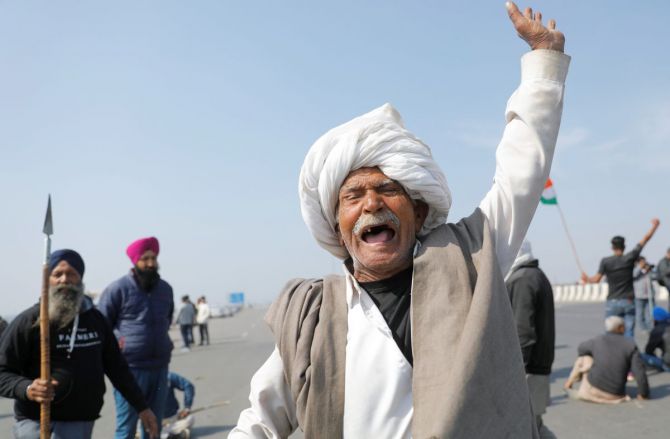 IMAGE: A farmer shouts slogans as part of protests against farm laws on a highway on the outskirts of New Delhi. Photograph: Adnan Abidi/Reuters

The marathon movement has sent out a message of unity, made "farmers visible once again" and brought them back on the political landscape of the country, they said on Friday.

For over three months, the three Delhi border points at Singhu, Tikri and Ghazipur have transformed into townships occupied by thousands of farmers from different parts of the country, mainly Punjab, Haryana and western Uttar Pradesh.

Rakesh Tikait of the Bharatiya Kisan Union said they are prepared to continue the protest as long as it is required.

"We are completely prepared. Unless and until the government listens to us and meets our demands, we will not move from here," said Tikait, who is among the leaders at the forefront of the movement.

Despite several rounds of talks between the government and the farmer unions, the two sides have failed to reach an agreement, and the farmers have refused to budge until the three laws are repealed.

The protesting farmers, on the other hand, have expressed apprehension that the new laws would pave the way for eliminating the safety cushion of the Minimum Support Price and do away with the "mandi" (wholesale market) system, leaving them at the mercy of big corporates.

While a resolution was reached on two of the four demands -- rollback of rise in power tariff and penalties for stubble burning -- in January, a decision on repeal of the three farm laws and a legal guarantee for MSP continues to be stuck in limbo.

However, according to the farmer leaders, the movement, which will complete its 100th day on Saturday, has achieved much beyond the immediate scope of the protest. It has evoked nationwide unity among farmers as well as recognised the contribution of women in farming.

Talking about how the protest has made the farming community a noteworthy player in the country's political landscape, Yogendra Yadav of Swaraj India said, "The movement has brought the farmers back on the political landscape of this country. It has made farmers visible once again. It has taught every politician a lesson ‘not to take panga' with the farmers."

"People used to take farmers for granted but this movement has shown that getting into a confrontation with farmers is costly business,” the activist-politician said.

The fight against the laws was one cause that seemed to have resonated with a large number of farmers throughout the nation, cutting across religious and caste barriers.
"It has united farmers like never before. Haryana and Punjab farmers are united. Despite deep attempts at communal mobilisation in UP, Hindu and Muslim farmers are united in this protest. Gujjars and Meenas are united in Rajasthan,” Yadav said.

Kavitha Kuruganti of the All India Kisan Sangharsh Coordination Committee agreed and added that the movement had proven very “constructive” socially as well.

"In Punjab, socially... things like substance abuse, alcoholism and so on have come down because the youth have been constructively engaged in the movement,” she said.

She added that the movement had also “reinforced the identity of women farmers”.

“Women farmers have been able to assert themselves and make their presence and participation felt in this movement. There have been recognition of women farmers as farmers,” she said.

To mark International Women's Day on March 8, the protesting men will hand over charge of managing the protest sites to their female counterparts.

“The stage management will be taken care of by women only. Besides, the spokesperson for the farmers movement for that particular day would all be women,” said Avtar Singh Mehma of the Krantikari Kisan Union.

Continuing the movement over such a long period has also not been devoid of any setbacks. One of the major setbacks that the movement faced was the January 26 tractor parade that resulted in clashes with the police.

"There's been the setback of January 26, when all farmers were portrayed as violent 'khalistanis' and so on. The image that was there of the protest before the 26th was intentionally maligned by the police and the government,” Kurugranthi said.

She added that they have also had to “fend off multiple attacks from the government, including supplies being cut, and locals being provoked against the protestors”.

Prepared for the long haul, protesting farmers at all the borders have already started gearing up to beat the Delhi summer, by equipping their trolleys with air conditioners, coolers and farmers.

Arrangements for better and steady supply of water are also being made.

After protesting against the new agri laws in their respective regions, farmers from Punjab and Haryana pushed towards the national capital with their 'Delhi Chalo' march and camped at Singhu and Tikri on November 26 last year.

They were joined a few days later by farmers from UP who set up a camp at the Ghazipur border.