When Kaushalendra Pratap Singh joined the police team to arrest Vikas Dubey in Kanpur's Bikru village, neither him nor any of his colleagues had anticipated that they would face an 'encounter-like' situation and walked into the trap laid by the notorious gangster at his mansion. 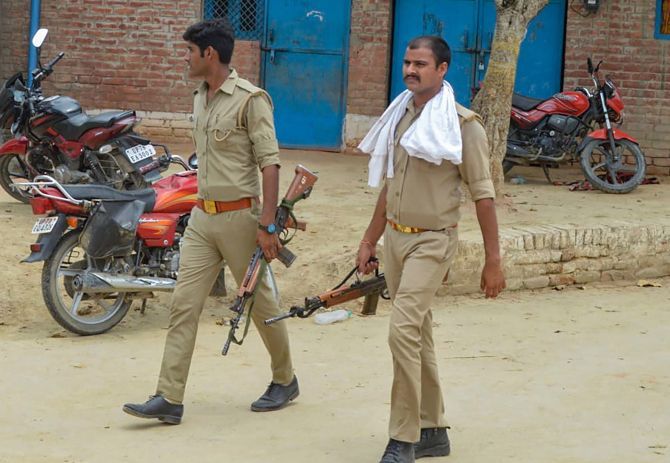 IMAGE: Police personnel during a search operation near the residence of main accused in the Kanpur encounter case, Vikas Dubey, in Kanpur, on Sunday. Photograph: PTI Photo

Speaking to reporters, the station officer of Bithoor police station in Kanpur district who was injured in the savage attack in which eight policemen were killed, recalled the events of the intervening night of Thursday-Friday that unfolded like a gangster film.

"Dubey's men were fully prepared. Each of them had weapons. They were using semi-automatic weapons. In single shot weapons there is a time gap between two shots," he said, adding that there were at least 15-20 people firing at the police team.

"On the other hand, all of us did not have 'aslaahaa' (arms and ammunition)," Singh told media persons from the private hospital in Kanpur where he is currently recuperating.

The SO said Dubey's gang had been briefed about the imminent police raid and made preparations, even arranging the lighting in such a manner that the policemen had to 'face darkness'.

"They had made arrangements in such a way that the focus of the light was on us, and not on them. We could not see them," Singh said.

The SO went on to say that his police station had received a phone call and was asked to accompany a raid team from the Chaubeypur police station.

"In the matters of neighbouring police stations, we help each other. We left at around 12.30 am and joined SO Chaubeypur.

"The police team which had gone there comprised Circle Officer Bilhaur, SO Shivrajpur and police force from Bithoor and Chaubeypur police stations.

He said when they reached outside Dubey's house, a JCB was placed as an obstruction in such a way that only one person could move to the other side.

"As soon as we crossed the JCB parked near his house, a spray of bullets was unleashed on us. Three persons first got bullet injuries and the rest of us got scattered. Everyone tried to hide wherever they could manage to," he said.

"We had gone there not anticipating that an encounter-like situation would emerge," he added.

Singh said there were two constables along with him and one of them, Ajay Sengar, got a bullet injury in his stomach.

"To save him, we took shelter behind a trolley there and gave cover fire," Singh said and added that he fired 4-5 rounds from his pistol.

He said it was difficult for him to ascertain how the bullet hit him as 'indiscriminate firing' was going on.

He also said he came to know later when he saw visuals of the attack on social media that the firing was going on from three sides and that at the place where Circle Officer, Bilhaur, was hiding, firing was done from right above him.

To a specific question on Vinay Tiwari, station officer of Chaubeypur police station who was suspended on Saturday, allegedly deliberately lagging behind the police team, Singh said, "It is wrong to say so, as we were moving in a single line."

The eight policemen killed in the line of duty, mostly in their 20s and 30s, included Deputy Superintendent of Police Devendra Mishra, 54.

Seven others, including a civilian, were injured in the attack that took place in the in the early hours of Friday.

The injured civilian is a helper of SO Chaubeypur, Singh said.