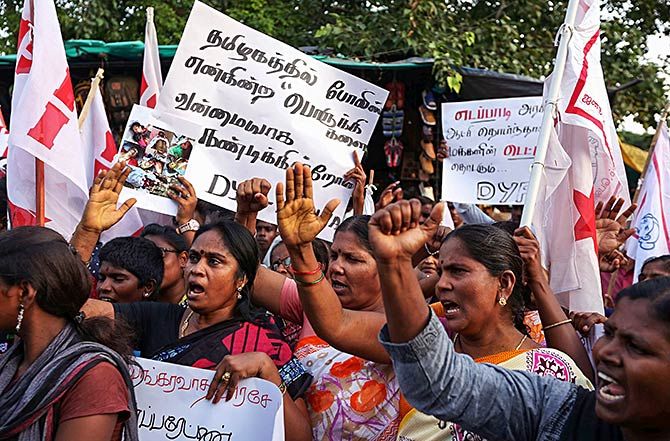 IMAGE: A protest against the Tamil Nadu government after 15 people were killed in police firing at protesters calling for the closure of the Vedanta Resources-controlled Sterlite Copper smelter in Thoothukudi, Tamil Nadu. Photograph: P Ravikumar/Reuters

Sterlite Copper, which has been operating in Thoothukudi for over 20 years, has not had an easy journey in Tamil Nadu.

When it announced last year that it was doubling its capacity, all hell broke loose.

Nineteen villages sat in protest for 99 days and, on the 100th day, they promised to come out on the streets to petition the district collector.

They could not keep their promise. The police cordoned off the villages and no villager could reach the collectorate.

But it did not end their protest. Their cause was taken up by local traders and fishermen who marched to the collectorate.

Fifteen people died in the police firing that ensued.

The Tamil Nadu government then issued an order to close the unit.

Sterlite challenged the order at the National Green Tribunal which set the Tamil Nadu government order aside.

Sterlite then approached the Tamil Nadu Pollution Control Board for permission to start its plant.

On December 24, some affected families, including children, met the collector and told him their lives was in danger from the unit.

Two groups of protestors moved the Madurai bench of the Madras high court against the NGT order. 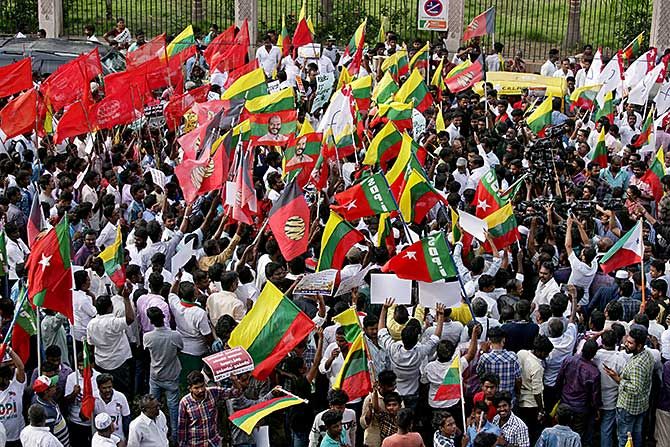 IMAGE: A protest after 15 people were killed in the police firing. Photograph: P Ravikumar/Reuters

"We have been meeting the collector regularly and have explained to him the havoc Sterlite has caused in the past. We are planning other protests too," Kittu Krishnamurthy, a local businessman who has been participating in the anti-Sterlite movement for more than a decade now, told Rediff.com.

"Sterlite is a willful defaulter. If they were not polluting the environment, why did they pay a fine of Rs 100 crores in the past?" Krishnamurthy asks, adding, "The state government order was set aside because it did not have any teeth."

"The state government could have easily passed a resolution against it (the Sterlite factory) in the assembly before issuing an order. They could have passed another law against it. They did not do so," Krishnamurthy adds.

"Instead, they issued a lame order they knew Sterlite will appeal against it and get it canceled. The NGT set aside an order by a weak government which did not apply its mind before passing the order," he says.

"We have planned our own action to stop Sterlite. We are meeting to chalk out our plans. You have to understand that various groups are protesting against Sterlite, but there is no understanding between the groups," Krishnamurthy points out.

"The Madras high court has stayed the NGT order favoring Sterlite. Now Sterlite will appeal against the stay. This drama will continue till the parliamentary elections," S P Udaykumar, who spearheaded the agitation against the Koodangulam nuclear power project, tells Rediff.com. 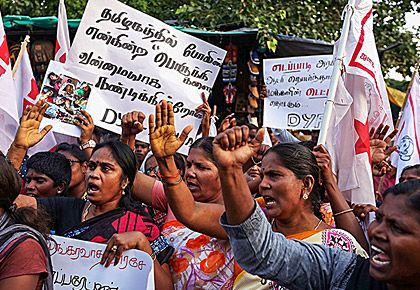