We have the numbers to form govt: Shiv Sena

Senior Shiv Sena leader Sanjay Raut on Thursday accused the Bharatiya Janata Party of delaying the process of government formation in Maharashtra and creating a situation for the imposition of President's rule. 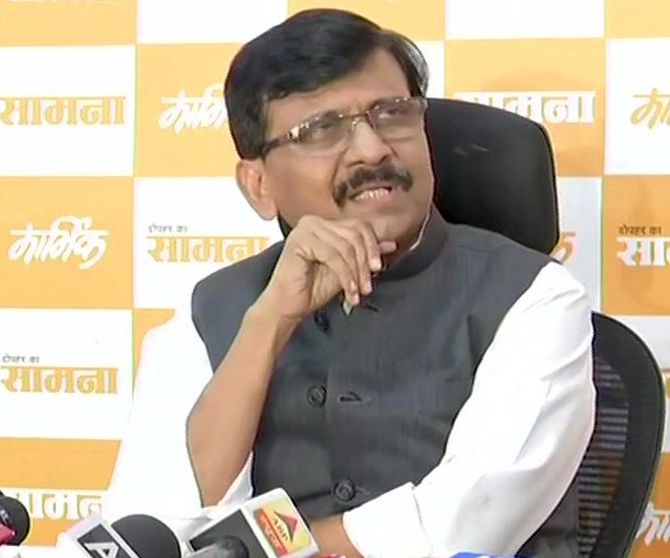 Addressing a press conference Mumbai, he said the BJP should declare that it is unable to form the government and then the Shiv Sena will take further steps.

Reiterating the Shiv Sena's demand for sharing the chief minister's post, he said the state's CM will be from the Uddhav Thackeray-led party only.

"You will know on the floor of the House. We have the numbers," he claimed.

"Why did the BJP leaders who met the governor today did not stake claim? Why did they return empty-handed? They want to create a situation for the imposition of President's rule. The BJP does not have the numbers," he said.

Downplaying the Sena's decision to shift all its MLAs to a hotel in suburban Bandra, Raut said, "Not all legislators have homes in Mumbai. So, the party has decided to ensure they get facilities under one roof."

After Thackeray chaired a meeting of the Sena MLAs at his residence, all the legislators were shifted to Rangsharda Hotel in suburban Bandra, amid the political uncertainty and fear of cross over.

Raut also said that there is no change in the Shiv Sena's stand on government formation and all the legislators support Uddhav Thackeray.

"If you think you are from the Shiv Sena, behave like one. For the Shiv Sena, the given word is very important. For us it is like 'pran jaaye par vachan na jaaye' (promise has greater value than life)," he said.

The BJP should show it has 145 MLAs in its support and form the government, he said.

Earlier in the morning, Raut said there have been no talks yet between RSS chief Mohan Bhagwat and Uddhav Thackeray on government formation in the state.

He also expressed confidence that MLAs of the Sena, and the opposition Congress and NCP "would not cross sides".

The BJP and Shiv Sena are locked in a tussle over the issue of the chief minister's post, resulting in a stalemate in government formation despite results of the October 21 assembly polls giving the alliance a combined seat strength of 161, way past the 145 majority mark in the 288-member House.