On the pricing issue, Eric Trappier said that the present aircraft are cheaper by 9 per cent. 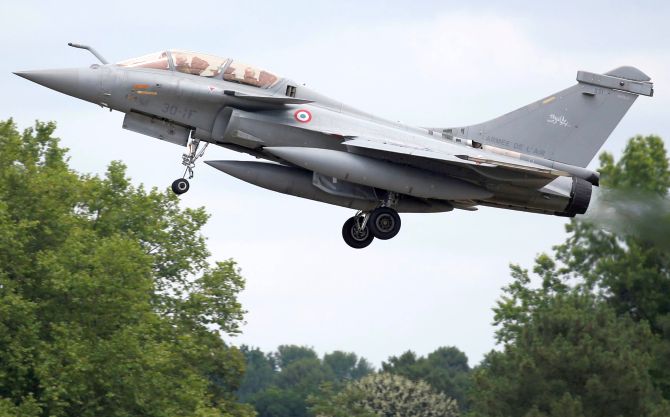 Dassault Aviation Chief Executive Officer Eric Trappier (pictured below) in an exclusive interview to ANI rubbished allegations made by Congress president Rahul Gandhi that the former lied about the details of the Dassault-Reliance joint venture for offset contracts in the Rafale Jet deal.

“I don’t lie. The truth I declared before and the statements I made are true. I don’t have a reputation of lying. In my position as CEO, you don’t lie,” said Trappier when asked to respond to Rahul Gandhi’s charge that Dassault was covering up for possible cronyism in awarding the offset deal to Anil Ambani-led Reliance Group.

Rahul Gandhi, in a press conference on November 2, alleged that Dassault invested Rs 284 crore in a loss-making company promoted by Anil Ambani which was used to procure land in Nagpur. “It is clear the Dassault CEO is lying. If an inquiry starts on this Modi is not going to survive it. Guaranteed,” added Gandhi.

Speaking to ANI in the Dassault hangar housed in Istres-Le Tube Air base located north of the French city of Marseille, Dassault’s CEO Eric Trappier said that they had prior experience dealing with the Congress party and the comments made by the Congress president made him sad.

“We have a long experience with the Congress party. Our first deal was with India in 1953 with Nehru and later with other prime ministers. We have been working with India. We are not working for any party. We are supplying strategic products like fighters to the Indian Air Force and the Indian government. That is what is most important,” said Trappier.

When pressed further for the reason behind Dassault’s choice of Reliance as an offset partner which had no experience in manufacturing fighter jets, Trappier clarified that the money being invested was not going to Reliance directly but in a joint venture that included Dassault.

“We are not putting the money in Reliance. The money is going into the JV. I put my know-how free of charge on how to produce people. I have engineers and workers from Dassault who are taking the lead as far as the industrial part of this deal is concerned. At the same time, I have an Indian company like Reliance who is putting money into this JV as they want to develop their country. So the company is going to know how to produce aircraft,” added Trappier. 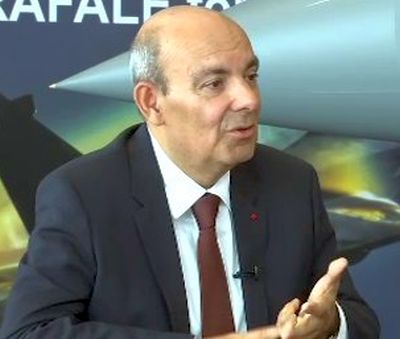 Trappier further clarified about the investments being made by Dassault, adding that Reliance would match the amount since the shareholding pattern is 49 per cent Dassault and 51 per cent Reliance as per prescribed government norms.

“We are supposed to put in this company together about Rs 800 crore as 50:50. For the time being, to start work in the hangar and to pay workers and employees, we have already put in Rs 40 crore. But it will be increased to Rs 800 crore, which implies Rs 400 crore by Dassault in the coming five years,” said Trappier.

He added Dassault has seven years to perform offset. “During the first three years, we are not obliged to say with who we are working. We have already settled work and agreement with 30 companies, which represents 40 per cent of total offset obligation as per contract. Reliance is 10 per cent out of the 40, while rest 30 per cent is a direct agreement between these companies and Dassault,” Trappier said.

On the pricing issue, the CEO said that the present aircraft are cheaper by 9 per cent. “The price of 36 was exactly the same when you compare with 18 flyaway. 36 is the double of 18, so as far as I was concerned, it should have been double the price. But because it was government to government, there was some negotiation; I had to decrease the price by 9 per cent. The price of Rafale in a flyaway condition is less expensive in the 36 contract than the 126 contract,” he said.

When asked about the initial agreement with Hindustan Aeronautics Limited and the subsequent breakdown of talks with the Indian PSU for production of Rafale jets, the Dassault CEO said that if the initial deal of 126 jets went through they would not have hesitated to work with HAL and Reliance.

“It’s because the 126 didn’t go smooth that the government of India had to reconfigure to urgently acquire 36 from France. And then I took the decision to continue with Reliance, and HAL even said in the last few days that they were not interested to be part of the offset. So, it has been done by my decision and the decision of Reliance to invest in a new private company,” added Trappier.

He added that Dassault was earlier in discussions with several other companies for offset tie-ups. “Obviously, we could have gone to Tata or other family groups. At that time, the decision to go ahead was not given to Dassault. We were in 2011, Tata was also discussing with other flying companies. We finally decided to go ahead with Reliance as they have experience in big engineering facilities,” Trappier said.

The Congress dismissed as ‘manufactured lies’ claims by the Dassault CEO.

Congress chief spokesperson Surjewala said the nation needs a ‘fair investigation’ and not ‘doctored explanations’ on the fighter jet deal, referring to comments by Trappier in a media interview that there was no corruption in the deal as alleged by the opposition party.

Congress spokesperson Manish Tewari alleged that the government, through its affidavit in apex court, was trying to ‘conceal more than it reveals’ and posed a set of questions.

"Dictated interviews and manufactured lies cannot cover up corruption in the Rafale deal. The first rule of law is mutual beneficiaries and the co-accused's statements hold no value. The second rule is beneficiaries and accused cannot be a judge in their own case. Truth has a way of coming out. Mr Modi, the nation does not want doctored explanations," Surjewala said.

"The fixed match between the Bharatiya Janata Party and Dassault Aviation will not hide the scam. The PR stunt that Eric Trappier and the Prime Minister Modi are doing will not cover up the layers of corruption in the Rafale deal," he alleged.

The Left parties also alleged that the government had spun a ‘web of lies’ to hide ‘corruption’ and its ‘wrong doings’ in the Rafale jet fighter deal.

The Congress, on its Twitter handle also said, ‘The government's submission to Supreme Court on the Rafale Scam makes it clear they did not take the basic steps fundamental to defence procurement. Prime Minister Modi's corruption is crystal clear.’

“There is a very clear violation of the Defence Procurement Procedure. Every process has been completed post-facto. The Rafale deal is shrouded in secrecy and it is very clear that a desperate government is using all tools and means at its disposal for a cover-up,” Sharma alleged.

Mounting a fresh offensive against the prime minister, Gandhi tagged a media report with his tweet alleging the government has thrown up more ‘wrong-doings’ by Modi in the Rafale deal in its affidavit before the apex court.

The media report claimed the affidavit has made it clear that the government did not take the most basic steps that are fundamental to any procurement.

The BJP hit back saying that Trappier's claims on the Rafale deal had exposed the lies of Congress and Rahul Gandhi whose behaviour, it alleged, had become increasingly irresponsible and oblivious to India's security needs.

The CEO, he added, made it clear that such an obligation with Anil Ambani's Reliance and 30 other firms would be undertaken solely by Dassault and that Government of India had no role whatsoever.

“The interview exposed all the lies of the Congress and its president," Prasad said, adding the Rafale fighter aircraft was inducted to ‘subserve’ the security needs of the Indian Air Force.

As many as 60 retired bureaucrats have written to the Comptroller and Auditor General expressing concern over audit reports on demonetisation and the Rafale deal being ‘deliberately’ delayed to not ‘embarrass’ the National Democratic Alliance government till next year's general elections.

In a letter, they said there was concern over ‘unconscionable’ and ‘unwarranted delay’ in bringing out the audit reports on demonetisation and the Rafale fighter jet deal, and the reports should be tabled before Parliament in the Winter Session.

The CAG's failure to present the audit reports on note ban and the Rafale deal in time "may be seen as a partisan action" and could create a ‘crisis of credibility’ for the institution, the letter said.

Sources in the office of the CAG said that the report on the Rafale deal is expected to be released by December.