Former Maharashtra chief minister Devendra Fadnavis on Sunday asserted that the Bharatiya Janata Party has no intention of joining hands with the Shiv Sena or to bring down the Uddhav Thackeray-led state government. 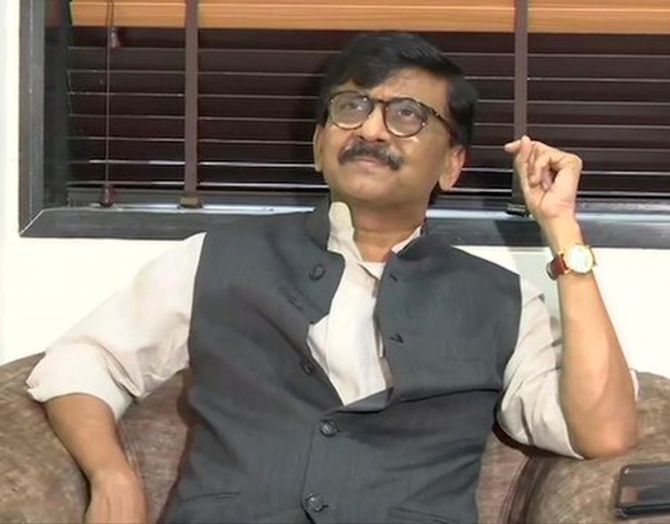 Talking to reporters in Mumbai, Fadnavis claimed people of the state are "unhappy" with the performance of the Shiv Sena-led Maha Vikas Aghadi government and it "would collapse due to its own inactions".

The senior BJP leader also said his meeting with Shiv Sena MP Sanjay Raut on Saturday, which prompted speculation in political circles, was regarding an interview for the Sena mouthpiece 'Saamana'.

The Shiv Sena snapped ties with the BJP last year after the Maharashtra assembly polls over the issue of sharing the chief ministerial post.

The Uddhav Thackeray-led party then joined hands with the Nationalist Congress Party and the Congress to form MVA government in the state.

"We have no intention of joining hands with the Shiv Sena or to bring down the government. When it falls on its own, we will see," said Fadnavis, who is the leader of opposition in the state ssembly.

"My meeting with Raut had no political connotations. He asked me for an interview to Saamana, to which I agreed. But, I had put my conditions- like the interview should be unedited and I should get to put my own camera during the interview. So we met to discuss its nitty-gritties," he said.

Meanwhile, Raut, who also spoke to reporters in Mumbai separately, said he and Fadnavis are not enemies and chief minister Uddhav Thackeray was aware of the meeting which was pre-planned to discuss the interview schedule.

"I met Devendra Fadnavis yesterday to discuss certain issues. He is a former chief minister. Also, he is the leader of opposition in Maharashtra and Bihar polls in-charge of the Bharatiya Janata Party. Our meeting was fixed as I wanted to take his interview for Saamana. Due to COVID-19 and other reasons, it could not materialise," he said.

"There can be ideological differences but we are not enemies. Chief Minister Uddhav Thackeray was aware of our meeting. We were not sitting in a bunker it was an open meeting," he added.

However, Congress leader Sanjay Nirupam criticised Raut, alleging that he was in a hurry to grab headlines.

"When that happens, political careers end. This is not my ill-wish for Raut, but a reality," the former Mumbai Congress chief said.

Nirupam, who has been sulking since his removal from the post of Mumbai Congress chief ahead of the Lok Sabha polls last year, said if the party is serious about opposing the new farm bills passed by Parliament,it should first ask the ruling Shiv Sena in Maharashtra to spell out its stand.

The Congress and the NCP say they will not allow implementation of the new laws in Maharashtra, while chief minister Thackeray hasn't uttered a word on it, he said.

"The Shiv Sena supported the farm bills in the Lok Sabha,while it staged a walkout from the Rajya Sabha when other opposition parties were demanding a vote on it," Nirupam said, adding that farmers in Maharashtra are confused (over the state government's stand).