West Bengal Chief Minister Mamata Banerjee on Thursday announced that the state is pulling out of the Centre’s Ayushman Bharat scheme, accusing the Narendra Modi-led National Democratic Alliance government of “playing dirty politics” under the garb of the health coverage programme. 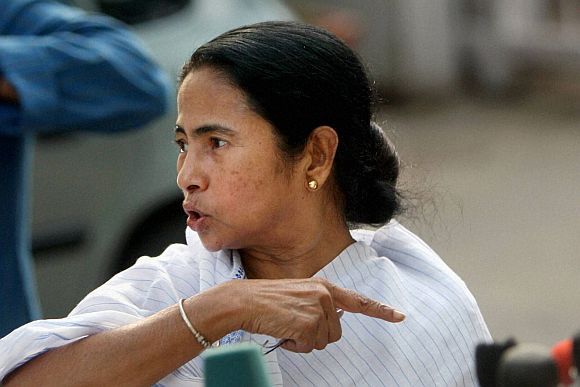 A top government official said that the Trinamool Congress government has written to the Centre to notify about its decision to withdraw from the scheme.

The ambitious Ayushman Bharat or the National Health Protection Scheme, which was launched by Prime Minister Narendra Modi in August last year, aims to cover over 10 crore poor and vulnerable families (approximately 50 crore beneficiaries) by providing health cover up to Rs 5 lakh per family per year.

The expenses incurred are to be shared between the Centre and the state in 60:40 ratio.

The TMC chief alleged that the prime minister was “politicising” the health scheme by sending letters about its provisions to every household of the state with his picture and a lotus symbol on top.

The Centre is “using” post offices to dispatch these letters, she said.

“You (Narendra Modi) are sending letters with your photograph on them to every household in the state, making tall claims to take credit for the scheme. Then why should I bear 40 per cent? The NDA government should take the entire responsibility,” she observed at a programme.

“I have seen the document with the PM’s picture and a logo resembling BJP’s party symbol. You (BJP government) have already destroyed the banking system with demonetisation and GST implementation. Now, you are using government money to campaign for the party,” Banerjee said.

According to reports, the Centre is sending out a two-page customised letter, highlighting the importance of the Ayushman scheme, to every beneficiary.

“In West Bengal, people do not need to pay for treatments. At state hospitals, people from Bihar, Jharkhand and even Nepal and Bangladesh receive free medical assistance. Then why is that the prime minister of the country is playing dirty politics?” the CM questioned.

She also accused the Union government of making “false claims” about crop insurance benefits to the farmers, even as the state government was bearing 80 per cent of the cost.

Last year, the state has spent Rs 625 crore for the purpose, Banerjee claimed.

“The Centre is making false claims about bearing crop insurance cost of farmers. In reality, the Union government pays just 20 per cent of the incurred cost,” the chief minister said.

Last month, Banerjee directed officials to rename central schemes, claiming the state was bearing 80 per cent cost of these programmes “but the Union government was taking credit for them”.

She also said the state government was willing to fund these schemes entirely.

Banerjee on Thursday claimed that the Modi government was deducting taxes from people’s accounts in the state without doling out adequate benefits to them.

“You are deducting money from people’s accounts in West Bengal and other states as income tax and customs and using just a percentage of it for their welfare. That is not a favour. Why is Narendra Modi acting as ‘dalaal (agent)? I do not favour this politics of cheating people,” the TMC chief said.

Questioning the role of the central government, she also alleged that the Modi government was trying to “run a parallel government” in all the states, including West Bengal.

“We were elected to power by the people, just like them. Do they (Centre) consult me when they set up any deal in the defence sector. Why is that they are interfering in the state matters? They do not enjoy the rights,” she added.