Virbhadra Singh, who steered Congress to power in the assembly polls, was on Tuesday sworn-in as Himachal Pradesh chief minister for a record sixth time, heading a ten-member ministry.

78-year-old Singh, who has held the top office in Himachal five times in the past, was administered the oath of office and secrecy by Governor Urmilla Singh at an open ceremony at the historic Ridge Maidan in Shimla. Nine cabinet ministers were also sworn-in.

A large crowd had turned up for the function which was held outside the Raj Bhawan for the third time in the history of the state.

The new council of ministers has three members from Kangra from where Congress won ten out of fifteen seats, two from Shimla district, two from Mandi and one each from Chamba, Una and Solan districts.

The ministry was finalised after Singh held consultations with Congress President Sonia Gandhi in Delhi on Monday, sources said. Singh was formally elected as the leader of the Congress Legislature Party in Shimla on Saturday.

Congress, which wrested power from BJP, has 36 MLAs in the 68-member assembly and one independent MLA has extended unconditional support to the party.

In his five-decade-long political innings, he has been a seven-time MLA and a five-time MP. He has also been a four-time president of the Himachal chapter of Congress and also represents the Mandi seat in the present Lok Sabha.

Singh had a detailed meeting with AICC general secretary Janardan Dwivedi, who was deputed as observer by the party high command for Congress Legislature Party meet, on Saturday evening in Shimla and discussed several key issues relating to government formation.

An eight-time MLA, Vidya Stokes, who is a former minister, is the only women member in the Cabinet. She has won from Theog in Shimla district.

Dhani Ram Shandil and Prakash Chowdhary represent the Scheduled Castes in the ministry while Thakur Singh Bharmauri is lone representative of the Scheduled Tribes.

Kaul Singh, a seven-time MLA, is a former minister and has also been the Speaker of the Assembly. Former minister G S Bali has won from Nagrota for the fourth time in a row while Thakur Singh Bharmauri from Bharmaur (ST) constituency is also a five-time MLA and a former minister.

Sujan Singh Pathania, elected from Fatehpur in Kangra district, is also a former minister and a six-time MLA while Mukesh Agnihotri from Haroli in Una district is a former Chief Parliamentary Secretary and a three-time MLA.

Sudhir Sharma, whose Baijnath constituency was reserved for SC during delimitation and had shifted to Dharamsala, is also a former Parliamentary Secretary and a three-time MLA.

Prakash Chowdhary, who was minister of state in BJP-HVC ministry headed by P K Dhumal, has been elected from Balh (SC) constituency for the third time.

Dhani Ram Shandil, a two-time Lok Sabha member from Shimla Reserve constituency, has won from Solan (SC) seat and is the only newcomer in the Cabinet.

The maximum limit of ministers for Himachal is twelve, including the Chief Minister and two posts are still vacant.

Kinnaur, Lahaul and Spiti, Bilaspur, Hamirpur, Chamba and Kullu with 20 seats have been left unrepresented in the first phase.

Two ruling party members would be elected Speaker and Deputy Speaker of the Assembly and some Parliamentary Secretaries would also be inducted later, party sources said. 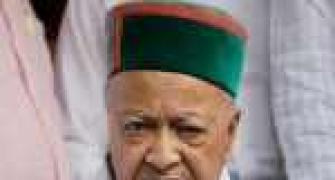 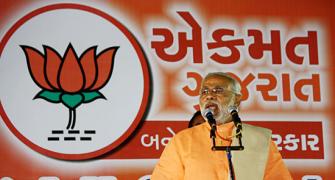