Residents yet to recover from shock as the Dahisar river in spate leaves behind a wake of destruction in Mumbai.

Most of Mumbai city may have returned to 'normal' after the deluge on August 29, when the city was battered by 330 mm of rain over a 24-hour period, but not the residents of Shantivan and Shri Krishna Nagar in Borivili East, north west Mumbai. 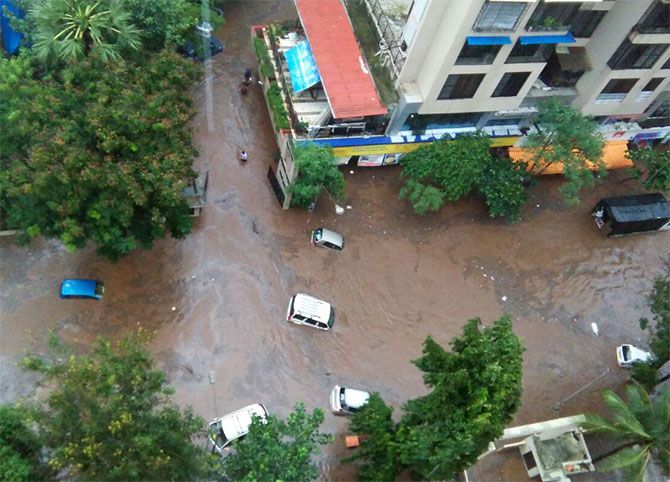 IMAGE: The Shantivan main road leading to the Western Express Highway is littered with cars swept away by the Dahisar river. Photograph: Rajashree Khanvilkar

The neighbourhood abuts the Sanjay Gandhi National Park, through which flows the Dahisar river that originates in the Tansa Lake, and wends its way through narrow nullahs to the Gorai creek where it merges with the Arabian Sea.

On the fateful Tuesday, around 5 pm, as the water levels rose in the Tansa lake following the downpour, SGNP authorities opened the sluice gates, releasing water into the Dahisar river.

Shantivan residents say the drill calls for the flood alert to be sounded twice, within a gap of 15 minutes, but it was not done this time.

The gushing waters swept everything in its path, including tens of vehicles, and raining sediment on the houses on the river bank.

The current was so powerful that the vehicles were deposited at the Western Express Highway, some 100 metres away.

Water rose till the first floor in some places, ruining entire homes and everything inside them.

According to The Times of India, 90 of the 170 houses in the area were flooded.

The water receded as quickly as it came, but the shocked residents who barely had any time to salvage their personal belongings, are still in a state of shock. IMAGE: Vehicles parked inside housing society compounds were bodily lifted by the river current and flung aside like toys. Photograph: Rajesh Karkera/Rediff.com

The job of cleaning up the muck left behind has fallen on the residents, with no sign of the BrihanMumbai Municipal Corporation conservancy staff so far.

When this correspondent visited the area on Wednesday evening, there was no road to be found; the river in spate had washed everything clean.

The last time the residents went through a similar nightmare was during the 26/7 floods of 2005.

SEE: The video shot by a resident of Shantivan shows the Dahisar river in spate, sweeping aside everything in its path.

The Madhav Chitale committee, which was then set up by the Maharashra government to study the causes behind the flooding and suggest remedies, had recommended the erection of flood-risk zones around the rivers in Mumbai, and to ensure that the areas around them were clear of construction.

But as the events of this week's terrible Tuesday show, some lessons are simply not learnt. 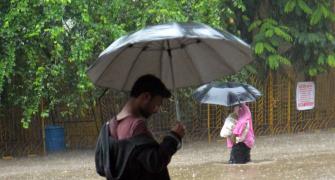