'War is declared on us from Pakistani territory' 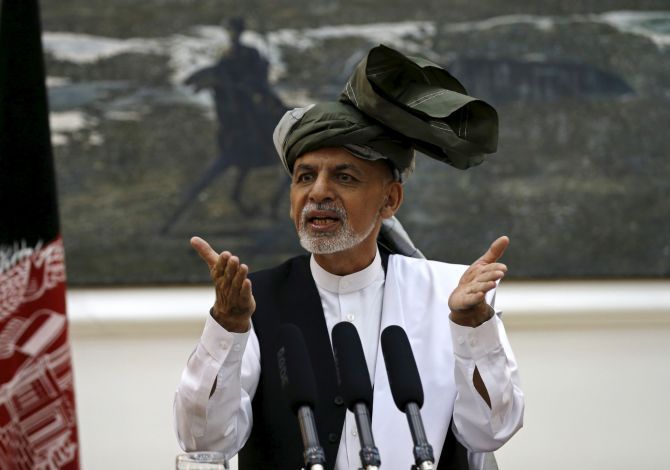 In a televised address, Afghanistan President Ashraf Ghani slammed Pakistan for failing to rein in the Taliban as peace talks falter and insurgents step up attacks that are a test for the beleaguered Afghan security forces.

Ghani blamed Pakistan for what he described as Islamabad's support to the insurgents whose war against Kabul is now nearing its 14th year, and said he was sending a delegation to Islamabad later this week to demand a stop to this.

Rediff.com reproduces the translation of the remarks made by President Ashraf Ghani at the press conference.

In the name of Allah, the most merciful, the most compassionate

Dear compatriots, over the last few days, we witnessed to some significant developments in our county and the region.  The war methods have changed against Afghans. The peace process is facing new questions. Furthermore, our people need to know where the Afghanistan-Pakistan relations are heading. I would like to further discuss these issues.

At the very outset, I would like to pay my heartfelt tributes and prayers to all those killed in the recent terrorist attacks and condolences to their families. I also wish a quick recovery for all those injured.

You must recall that we and those who are informed of the situation in our country and region had predicted that this year would be the most difficult of all since the Bonn process. The reason is clear. The withdrawal of over 100,000 highly equipped international military forces plus the transfer to Afghan forces of the entire responsibility to counter threats -- a development that was not unforeseeable. International observers had predicted that Afghanistan may not be able to deal with this new situation even for a few days. Our enemies had been waiting for a power vacuum so they could take advantage of and see the government collapse. However, none of the gloomy predictions turned to reality. The enemies were disappointed. Our defense and security forces quickly filled in the gap left behind by the international forces and defeated the enemies on all fronts. Let me express my deepest gratitude to our brave sons and daughters in uniform for all the sacrifices they are making.

On the political ground, a recent significant development was that Mullah Omar was not alive. It was our intelligence agency which confirmed the death of Mullah Omar and revealed the lies and fabrications. This confirmation not only demonstrated the strength and maturity of our intelligence agency, but also reaffirmed the fact that the war in Afghanistan is fought for and by others and that the so-called Amir-ul-Momenin, who apparently led and commanded the war, might not have even existed.

Terrorism is a vast and a widespread concern. The terrorist attacks in Afghanistan, Saudi Arabia, Iraq, Syria, Turkey and other Muslim countries are of the same nature. These attacks pursue no goals but to collapse states and state system in the region. This was for this particular reason that a grand gathering of Muslim scholars in the city of Makkah condemned these attacks. As I reaffirmed it in the Shanghai Summit in Russia, we will continue to make every effort to overcome this phenomenon, and to build a regional consensus for effective cooperation to that end.

The recent series of attacks in Kabul and other provinces show that the war has changed shape. The enemy who was fighting to gain some territory and to claim a victory has now had its backbone broken. It is so desperate now that it has turned to cowardly attacks against innocent people just to weaken people’s morale.

In my conversation last night with Pakistan’s Prime Minister and the Chief of Army Staff, I made it clear that the government of Pakistan should have the same definition of terrorism in regard to Afghanistan, just as it has for its own. During my visit to Pakistan last November, we affirmed our full commitment for peace and made it clear that peace had two aspects: peace with Pakistan and peace with Taliban.

We discussed the common opportunities and threats. We made it very clear to the Pakistani side that a new window of opportunity has opened and depending on the capacity and the will of the Pakistani leadership to change the window into a door and then to an alley and even a highway, or shut it all together.

Over the past ten months, we have persistently shown that Afghanistan has both the will and enough capacity to this end. We have shared intelligence with the Pakistani side so that both could carry out a comprehensive and targeted anti-terrorism campaign to rid our nations of violence. We waited all this long for Pakistan to demonstrate its will through action.

However, Pakistan still remains a venue and ground for gatherings from which mercenaries send us messages of war. The incidents of the past two months in general and the recent days in particular show that the suicide training camps and the bomb making facilities used to target and murder our innocent people still operate, as in the past, in Pakistan. Just as the incident in Peshawar and the killing of hundreds of innocent children in a school became a turning point in Pakistan, the recent incidents in Kabul and other provinces are no less and we call it a turning point for Afghanistan.

Our righteousness has been proven and everyone in the region knows we made all sincere efforts for peace. The decisions that Pakistani government will be making in the next few weeks will be as significant to affect bilateral relations for the next decades. The security of our people and the national interests of Afghanistan lay the basis of our relationship with Pakistan. We can no longer tolerate to see our people bleeding in a war exported and imposed on us from outside.

In my conversation last night, Pakistan Prime Minister pledged to direct his government to chart out an action plan against terrorism and to discuss and decide on its implementation during a trip by an Afghan delegation in the coming Thursday.

We hoped for peace, but war is declared against us from Pakistani territory; this in fact puts into a display a clear hostility against a neighboring country.

I ask the government and people of Pakistan to imagine that a terrorist attack just like the one in Kabul’s Shah Shahid area took place in Islamabad and the groups behind it had sanctuaries in Afghanistan and ran offices and training centers in our big cities, what would have been your reaction? Will you have looked at us as friends or enemies?

I would like to call on those Taliban who do not want their country destroyed and their people killed, to quit the ranks of criminals and insurgents and to reintegrate into their society. Today, the resources that should have been spent on building factories, hospitals and on other development projects are spent for defense and fighting a war exported to us by others.

The people of Afghanistan are all Muslims, so Islam is not the issue in this war. The political system in Afghanistan is based on the religion of Islam, and all the research shows that the Constitution of Afghanistan compared to those in the neighborhood, is enriched with Islamic values and ideas. Islamic scholars believe that having a system, even weak and rife with defects, is a lot better than not having a system at all. Islam is a religion of peace and stability. According to Islamic Sharia, anyone engaged in acts to destabilize and wreck security in a society and kill Muslims, is described as insurgent and warmonger.

Again, the main question is how can those who claim to have been acting on Sharia can be this careless to the massacre of the innocent people? What would be their response to Aya 32, Sora Almaida of the Holy Quran which says, “Whoever kills a soul unless for a soul or for corruption [done] in the land -- it is as if he had slain mankind entirely.”?

There will be no flexibility of any kind with the criminals. We have directed the courts and the judicial authorities to show no leniency with those who have our people’s blood on their hand and those who respond the peace call with war and criminality will undoubtedly receive maximum punishment.

We very well know who stands in the way peace and why they do so. Whoever is engaged in criminality, narcotics, and atrocities, and whoever works for the outsiders to destroy Afghanistan is the enemy of peace. Such people fear peace, they fear rule of law and fear a stable and peaceful Afghanistan. Experience has shown that whenever there is a chance for peace, enemies are irritated and resort to violence and brutality. However, we have not and will not allow any such acts to deter us from our quest for peace or to force us into giving warmongers any concessions. We will make peace only with those who believe in the meaning of being a human, Muslim and Afghan and who do not destroy their own country on order from foreign masters.

I call on and request our politicians to do their utmost to keep this nation together at this critical juncture and to refrain from any actions that spread suspicions and disunity from which enemy may benefit.

Very luckily, Afghan youth are more willing today than ever to join the ranks of their country’s armed forces. Consistent to the demand, we have also adjusted and increased our recruitment volume up to 9 percent.

Let me conclude by a last remark on the relations between Pakistan and Afghanistan. Our relation with Pakistan is based on our national interests, on top of which comes security and safety of our people. If our people continue to be killed, relations lose meaning and I hope it will not happen.