There has been a virtual communications blackout in the Valley with no phones and no internet connections since the early hours of August 5, reports Sumir Kaul 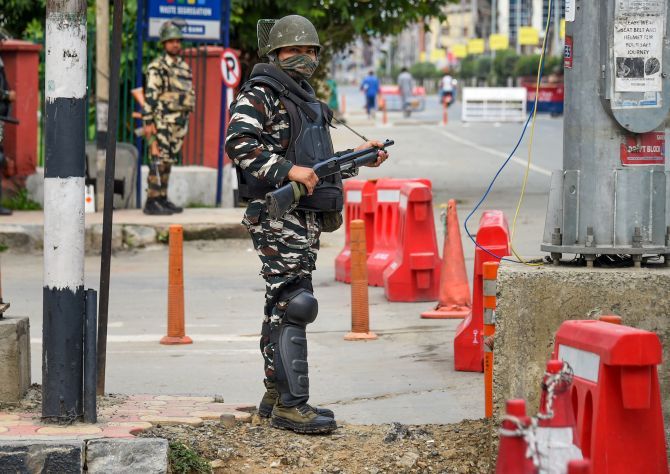 IMAGE: Security personnel stand guard during restrictions in Srinagar. Restrictions have been imposed in several districts of Jammu and Kashmir as a precautionary measure after the state lost its special status and was bifurcated as Parliament approved a resolution scrapping Article 370 of the Constitution and passed a bill to split the state into two Union Territories. Photograph: S Irfan/PTI Photo

Two hours in the queue and just about two minutes on the phone. That's the new equation many Kashmiris are dealing with as they line up outside the Deputy Commissioner's office in Srinagar, waiting for their turn to speak to their families and others outside the Valley.

There is so much to tell and so many urgent messages to convey in a conversation that has to be carefully calibrated. And sometimes, as the words tumble out hastily, the two, maybe three, minutes just don't seem enough.

There has been a virtual communications blackout in the Valley with no phones and no internet connections since the early hours of August 5, when the Centre announced that Jammu and Kashmir's special status was being revoked and proposed that the state be split into two union territories.

News channels have also been discontinued on cable networks.

The restrictions imposed in Jammu and Kashmir on people's movement and communication may continue for some more days and any decision on lifting them will be taken by the local administration, a top government official in New Delhi said.

"If the trade-off is between inconvenience and loss of life, what should we choose? However, the administration is aware of the difficulties being faced by people and trying to minimising inconvenience. Any such decision will be taken by the local administration," the official said.

Jammu and Kashmir Principal Secretary Rohit Kansal said at a press conference in Srinagar that he is hopeful of further relaxations in the security clampdown.

"We are further hopeful that once the full dress rehearsals for Independence Day, being carried out in various districts of Jammu and Kashmir and Ladakh concludes, there will be further relaxations," Kansal said. 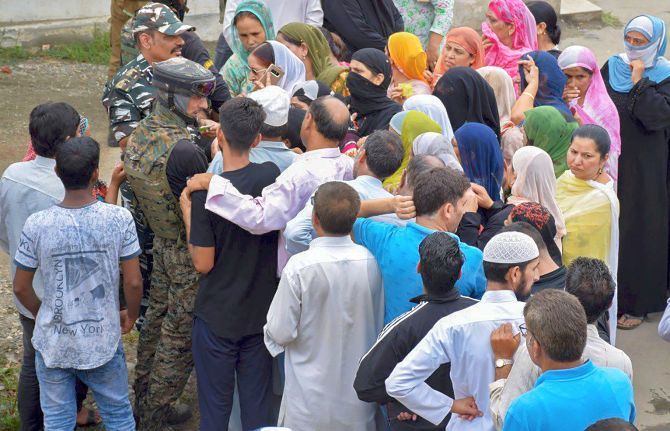 Marufa Bhat, waiting outside the Deputy Commissioner's office  to speak on a phone line provided by the government for the public, is among those hoping for the restrictions to ease.

When she finally gets her turn after a two-hour wait, she phones her sister in Delhi. But, overcome with tears and overwhelmed by circumstances, she can barely manage to get the words out.

"My father recently underwent a coronary heart bypass surgery in Delhi. We returned recently and now the medicines are running out. That is why I had to reach out to my sister in Delhi," said Bhat, holding her one-year-old-son.

Deaths in the family, business transactions and exams... the reasons for getting hold of the phone are urgent and many.

The conversations usually begin in chaste Kashmiri with callers ever mindful of the many others behind them waiting their turn.

Mohammed Ashraf collapses after a call to his son Hamas and relatives gather around him to offer water. Hamas' grandfather died five days ago and Tuesday was the earliest Ashraf could convey the news to him.

KashmirValley, according to government estimates, has a mobile penetration of around 87 per cent.

Mobiles kept the youth busy, said Liaquat Shah, a trader waiting to call his wholesaler in Ludhiana to stop the supply of leather goods as conditions in the state are not conducive at the moment. They would surf the internet and learn about what's happening in the world, he added.

Security officials said communication links had to be snapped as a preventive measure.

"This became a tool for spreading all kinds of rumours and misreporting of incidents. Recently, an international channel reported that firing took place last Friday in outskirts of the city. No bullet was fired. Had mobiles been there, this kind of misreporting would have set other parts of the Valley on fire," said a senior police officer on condition of anonymity.

However, there is grudging admission among some officials that phone lines have paralysed life and many people are suffering.

The state administration on Sunday said 300 public booths have been started but many people said they are unaware. "Where are they?" asked Arsalaan Wani, who wanted to tell his uncle in Chandigarh to fill his National Eligibility Test form.

"I get dreams about my mobile phone ringing," he said.