In the first electoral exercise in Jammu and Kashmir since the abrogation of Article 370, nearly 52 per cent turnout was recorded on Saturday in the maiden District Development Council polls. 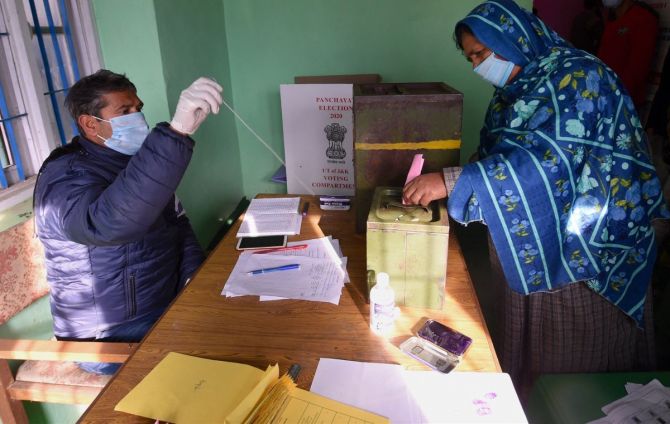 IMAGE: A woman casts her vote for the first phase of the District Development Council elections, at Gund in Ganderbal district of central Kashmir. Photograph: S Irfan/PTI Photo

The first round of polling on Saturday in the eight-phase DDC election passed off peacefully, except for a minor incident of stone-pelting in Kulgam.

State Election Commissioner K K Sharma told reporters that 51.76 percent of the 700,842 eligible voters exercised their franchise during the voting which began at 7.00 am and ended at 2.00 pm.

Reasi in Jammu recorded the highest voter turnout of 74.62 percent while militancy-infested Pulwama witnessed the least voter participation at 6.7 per cent. IMAGE: Voters undergo thermal screening as they arrive to cast their votes for the first phase of District Development Council elections, at Hariganiwan area of Gund in Ganderbal district of central Kashmir. Photograph: S Irfan/PTI Photo

Sharma said the voting was peaceful across the Union territory, barring one incident of stone-pelting that took place in Kulgam district of South Kashmir.

In the first phase of the DDC elections, voting was held in 43 constituencies, including 25 in Kashmir, and 1,475 candidates were in the fray, according to officials.

It is the first election since the Centre scrapped Article 370 that gave special status to J-K in August last year and bifurcated the state into UTs.