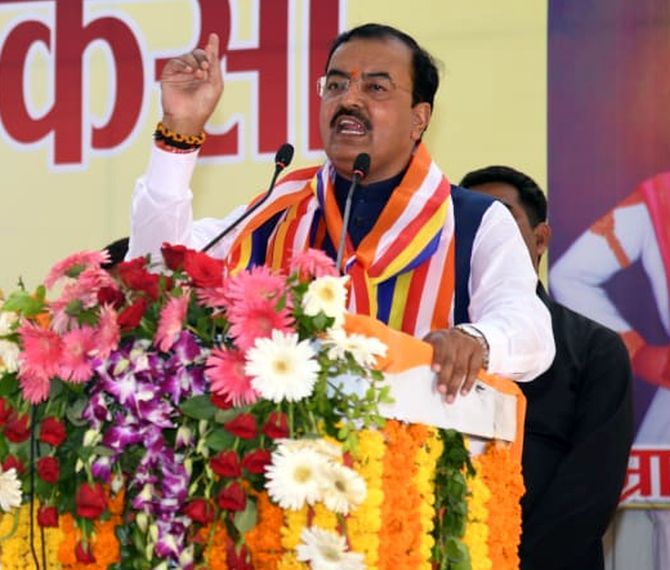 He said the upcoming Maharashtra and Haryana assembly elections are crucial as these will be the first polls in the country after the abrogation of Article 370, which gave special status to Jammu and Kashmir.

He was addressing a public gathering in support of BJP candidate Narendra Mehta from Mira Bhayander assembly segment in Maharashtra's Thane district on Sunday night.

"By pressing the lotus button (BJP's poll symbol), not only Prime Minister Narendra Modi, chief minister Devendra Fadnavis and Narendra Mehta will be benefitted, but it will mean that a nuclear bomb will by itself get dropped on Pakistan," Maurya said.

The entire world will closely watch the upcoming assembly elections in these two states as it will indicate the real patriotism of Indians, the BJP leader said.

"These will be the first elections to be held in the country after the scrapping of Article 370, hence have immense importance. The results of these polls will reveal people's 'rashtra bhakti' (patriotism)," he said.

So, it is essential for every voter to exercise his/her franchise to make the "right choice", he said.

"The vote you cast will not be for Narendra Mehta alone, but it would be for the leadership of Prime Minister Modi and chief minister Fadnavis," Maurya told the gathering.

Taking a dig at the opposition, he said, "Goddess Laxmi does not sit on the palm of hand, bicycle or clock (in an apparent reference to poll symbols of Congress, Samajwadi Party and NCP respectively), but she sits on a lotus, which is a symbol of development."

He said leaders of the opposition Congress and NCP were pained when Defence Minister Rajnath Singh performed 'shastra puja' on the Rafale fighter jet, emblazoned it with an 'Om' and placed lemons under the aircraft's wheels.

He was referring to the last week's handover ceremony of the first Rafale fighter jet acquired by the Indian Air Force from France.

Maurya also said that BJP's rebels and detractors should not be under the impression that they will get 'sympathy votes'.

"They will not get a single vote in this election from sympathisers of the BJP," he added.

Polling in both Maharashtra and Haryana will be held on October 21 and counting of votes will take place on October 24.