The United States remained a tinderbox of anger and emotion as rioting and looting linked to the protests against the custodial killing of African-American George Floyd left a trail of destruction, resulting in the death of at least five people, arrest of about 4,000 and placing of curfew in nearly 40 cities, while forcing President Donald Trump to take shelter in a White House bunker. 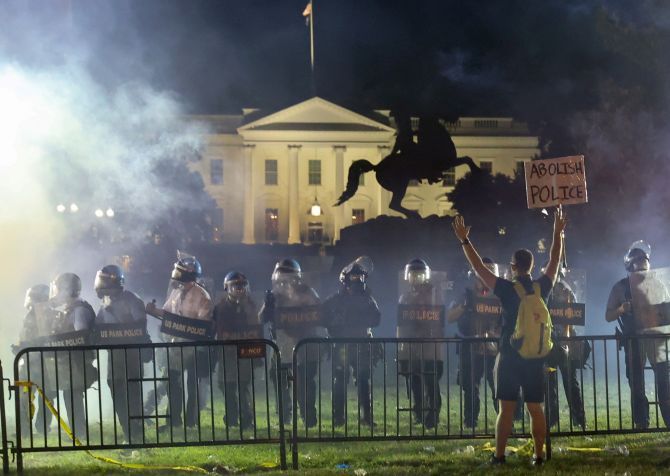 IMAGE: Police in riot gear keep protesters at bay in Lafayette Park near the White House in Washington, US. Photograph: Jonathan Ernst/Reuters

Police have arrested about 4,000 people in two dozen US cities with a large number of arrests taking place in Los Angeles, according to media reports.

Considered to be the worst ever civil unrest in the US in decades, the violent protests have engulfed at least 140 cities across America in the days following the death of Floyd, a 46-year-old man who was pinned to the ground in Minneapolis on Monday by a white police officer who kneeled on his neck as he gasped for breath.

Some of the protests have turned violent, prompting the activation of the National Guard in at least 20 states.

Dozens of officers across the country have been injured by rocks other objects hurled at them, CNN reported.

"We have officers with broken bones and bruises. More than 20 officers went to the hospital. At least two of these required surgery," Chicago Police Superintenent David Brown said.

'At least five people were killed in violence that flared as demonstrations in parts of the country devolved into mayhem,' The Washington Post reported.

The unrest initially began in Minneapolis in Minnesota but has now spread across the country, with reports of violence coming in from across major cities including Los Angeles, Chicago, New York, Houston, Philadelphia and Washington DC.

'The United States remained a tinderbox of emotion, anger and continued violence on Sunday, the sixth day of nationwide unrest since the death of yet another black man at the hands of the police,' The New York Times reported.

In Birmingham, protesters started to tear down a Confederate monument that the city had previously covered with a tarp amid a lawsuit between the state attorney general and the city.

In Boston, a police SUV was set ablaze near the State House, sending up a column of black smoke after a large group of protesters had mostly dispersed.

In Philadelphia, police officers in riot gear and an armoured vehicle used pepper spray to try to repel rioters and looters.

In New York, demonstrators marched across the Brooklyn and Williamsburg Bridges, snarling traffic. The Manhattan Bridge was briefly shut down to car traffic. Chaos erupted in Union Square, with flames leaping up two stories from trash cans and piles of street debris, the Times said.

'It is the first time so many local leaders have simultaneously issued such orders in the face of civic unrest since 1968, after the assassination of the Rev. Dr. Martin Luther King Jr,' the report said.

The police fired tear gas near the White House on Sunday night to dissuade protesters who had smashed the windows of prominent buildings, overturned cars and set fires, with smoke seen rising from near the Washington Monument, it said.

For the past few days, thousands of protesters have gathered outside the White House raising slogans against President Trump.

According to CNN, President Trump was briefly taken to the underground bunker for some time during the protest outside the White House, while First Lady Melania Trump and their son Barron were also taken to the bunker.

President Trump made no public appearances on Sunday, but in a series of tweets he blamed the media for fomenting hatred and anarchy in the country.

'The Lamestream Media is doing everything within their power to foment hatred and anarchy. As long as everybody understands what they are doing, that they are FAKE NEWS and truly bad people with a sick agenda, we can easily work through them to GREATNESS!' he said.

Earlier in the day, he announced that his administration will be designating ANTIFA as a Terrorist Organization. ANTIFA is regarded as a militant, left-wing, anti-fascist political activist movement in the US. It comprises autonomous activist groups that aim to achieve their political objectives through the use of direct action rather than through policy reform.

US Attorney General William Barr said that the violence instigated and carried out by the organisation and other similar groups in connection with the rioting is domestic terrorism and will be treated accordingly.

The Trump administration alleges that it appears the violence is planned, organised, and driven by anarchistic and far left extremists, using ANTIFA-like tactics, many of whom travel from out of state to promote the violence.

Former Vice President Joe Biden, who is the presumptive presidential nominee of the Democratic party, visited a protest site in Delaware on Sunday.

'The only way to bear this pain is to turn all that anguish to purpose. And as President, I will help lead this conversation -- and more importantly, I will listen, just as I did today visiting the site of last night's protests in Wilmington,' he said.

The Committee to Protect Journalists, in a late night statement said that several dozen covering the protests have been harassment, as well as arrested by law enforcement agencies.