Voters in a Maharashtra village have alleged electronic voting machines malfunctioned during Lok Sabha bypoll on Monday, saying it resulted in votes cast for any candidate going to Bharatiya Janata Party's account, a claim denied by election officials. 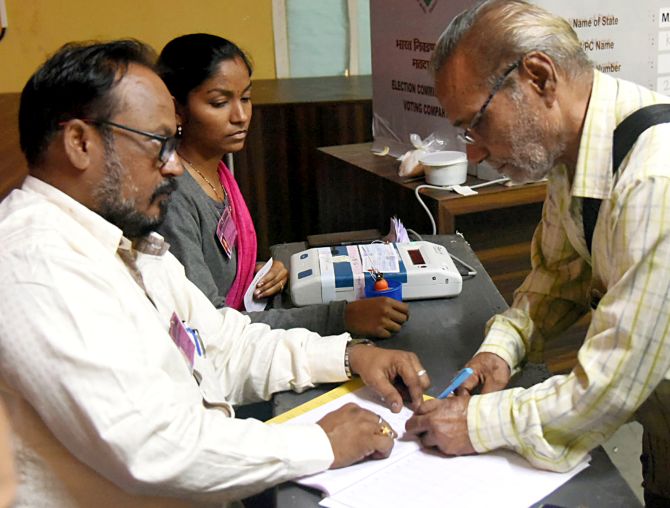 Nationalist Congress Party legislator Shahshikant Shinde said he was witness to such a thing happening when he visited the polling booth in Navlewadi village of Koregaon tehsil in Satara district.

Kirti Nalawade, the returning officer for the Koregaon assembly segment in Western Maharashtra, where this village is located, refuted the claim.

Shinde said the Election Commission should take a serious note of this incident and initiate steps to check its recurrence.

Villagers said votes cast in favour of the NCP nominee Srinivas Patil were going into the "account" of BJP candidate Udayanraje Bhosale, a claim the district election officials rejected.

Shinde said when he reached the polling station and raised the issue with the election officials from the booth, they hurriedly changed the EVM machine.

Bypoll for Satara Lok Sabha constituency was held simultaneously with the assembly poll on October 21.

"I received a call from some voters and our party workers who informed me that votes cast for the NCP candidate were going to the BJP nominee. By the time I reached there, around 270 votes were cast in a similar manner," Shinde said.

Shinde said as some voters had expressed their doubts, the NCP polling booth agents asked the officials to verify the claims.

"Meanwhile, one person came there to cast his vote. Before he could press the button, the red light next to the BJP's Lotus symbol blinked. That voter also noticed this and objected to it, after which the (poll) officials there orally accepted that there was some issue with the machine," Shinde said.

He said the officials told party agents and voters to pay fee for a mock test to clear their doubts.

"I suggested that a voter will cast his vote in the presence of the main poll official there to verify the claims. When one person went to vote, the machine suddenly developed some issue and stopped working," he said.

He said by the time all this happened, 293 votes were cast and officials refused to accept the demand by the polling agents and voters for fresh polling.

Nalawade said that after voters raised the issue, they were asked to fill up a form for a mock test but they were not ready for it.

"We replaced the machine not because of their claims but because there was some issue with the pressing of the button. The replacement has nothing to do with these claims," the poll official said.

Before polling commenced in the morning, a mock poll was held in the presence of all polling booth agents and at that time, no one had raised any objection. Polling went on smoothly till 4 pm, she added.

Patil, former governor of Sikkim, said he raised the issue with election officials on the basis of information and accounts of some voters in the village.