'Vigilant for every inch of land': Amit Shah on Ladakh row

Amidst the continuing standoff with China in Ladakh, Union home minister Amit Shah on Saturday said the Narendra Modi government is fully alert towards securing each inch of the country's land and no one can take it away. 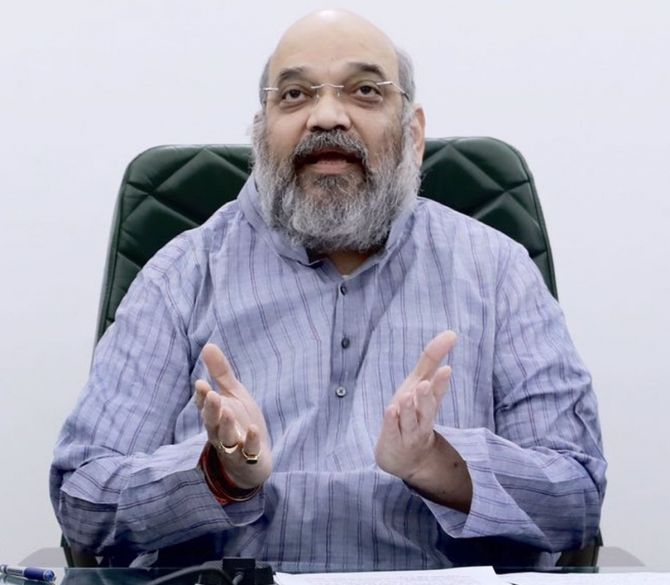 Shah also said the government is taking all possible military and diplomatic steps to resolve the standoff in Ladakh with China.

"We are vigilant for every inch of our land, no one can take it away...Our defence forces and leadership are capable of defending the country's sovereignty and border," he told CNN News18 when asked about the current standoff with China in Ladakh.

The home minister also said that the government is committed to protecting the sovereignty and security of the country.

Referring to the coming Bihar elections, Shah expressed confidence that the National Democratic Alliance will get a two-third majority.

He said Nitish Kumar will be the next chief minister of the state after the polls.

The home minister said there will be a change of government in West Bengal after next year's assembly elections and a Bharatiya Janata Party government will assume power there.

"We feel we will have a determined fight in West Bengal and we will form the government," he said.

He also said that the law and order situation in West Bengal is serious and political parties like the BJP have every right to seek imposition of President's rule there.

"The central government will take an appropriate decision taking into account the Constitution and on the basis of the governor's report," he said.

When asked whether the BJP will stake claim for the chief ministership in Bihar if the saffron party gets more seats than the ally Janata Dal-United headed by Nitish Kumar, he said "There is no if or but. Nitish Kumar will be the next chief minister of Bihar. We have made a public announcement and we are committed to it."

Talking about the Lok Janshakti Party breaking away from the ruling alliance in Bihar, Shah said the party was offered adequate seats but still walked away from the alliance.

Asked to comment about the incident of alleged gang-rape and murder of a woman at Hathras in Uttar Pradesh, Shah slammed the opposition for indulging in politics over it and said all accused were arrested on the day of the incident and a CBI inquiry is already under progress.

"There was a rape in Hathras and a similar incident had taken place in Rajasthan. But politics is centered around Hathras only. No one raised the incident of Rajasthan. The accused (in Hathras) were caught on the same day. A committee has been constituted to probe it...the CBI is also probing it. There should not be politics on it," he said.

Asked about the situation in Jammu and Kashmir a year after the abrogation of Article 370, the home minister said law and order in the Union territory is normal now even though there was a challenge due to the COVID-19 situation.

"(New Lieutenant Governor) Manoj Sinha ji is there now and he will ensure that development reaches the last man. You will see major development there in 5-6 months," he said.

Asked about allegations of drug menace in Bollywood, Shah said he does not want to link the two.

"I think drugs and Bollywood should not be seen together. Drugs are a menace and should be ended soon. We have taken many strong steps in the past and are going to strengthen law and infrastructure to check it.

"You will see a big change in the coming days when it comes to probing infrastructure, legal provisions and manpower for eradicating the menace of drugs from the country," he said.

The home minister also appealed to the people to follow the prime minister's advice on COVID-19.

"Till there is a medicine, we all should follow the prime minister's advice to wash hands, keep distance and wear masks," he said.