BJP leader and Bhopal MP Pragya Thakur, who was confined to a wheelchair for a long time and had obtained bail in the 2008 Malegaon blast case on medical grounds, is purportedly seen playing kabaddi in a viral video. 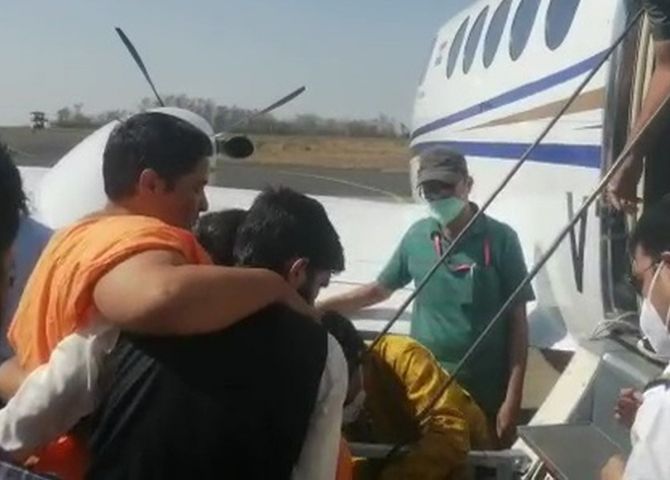 IMAGE: Bhopal MP Pragya Singh Thakur being taken to Mumbai after she complained of breathing problem in March 2021. Photograph: ANI

Earlier, a video of her taking part in a Garba dance during the ongoing Navratri festival had also emerged.

But her sister said her spine problem can give her trouble any time.

A video which went viral on social media showed Thakur playing a game of kabaddi on the premises of a Kali temple on Wednesday.

Another video had shown her dancing at a Garba programme at the same venue during the ongoing Navratri, while an earlier clip had shown her shooting hoops on a basketball court.

"It is a matter of happiness to see you healthy. Today you were seen playing Garba. But whenever people are in distress and they are calling you, you are seen sick, on a wheelchair or walking with support. It really hurts. God should always keep you healthy,” he tweeted.

Defending the Bhopal MP, her elder sister Upma Thakur told PTI over phone that she suffers from a spine problem.

"You never know at which moment it can create problems for her. There is a problem with her L4 and L5 bones (vertebrae) as they got dislocated because ATS Maharashtra (investigators) threw her on the floor.”

“Whenever these problems occur, the lower portion (of her body) is left with no sensation....It can happen even when she sits or gets down from a vehicle,” Upma said.

MP Congress media department's vice president Bhupendra Gupta said, “There are different faces of Bhopal MP. Sometimes she is seen in a wheelchair, sometime she plays Garba and kabaddi too. She has many faces.”

Her past claims of defeating coronavirus with cow urine are worth publishing in international journals, he said in another jibe.

"People of Madhya Pradesh want to know which is her right face -- one playing garba or kabaddi or that of a wheelchair-bound person?" he asked.
The 51-year-old BJP MP is out on bail in the Malegaon blast case on health grounds and had sought exemption from personal appearance in the trial court citing her physical condition. She was in prison for almost nine years and was granted bail in 2017.

The case against her relates to bomb blasts at Malegaon in Maharashtra on September 29, 2008, in which at least six persons died. The case was probed by the Maharashtra Anti-Terrorism Squad (ATS) before the National Investigation Agency (NIA) took it over.