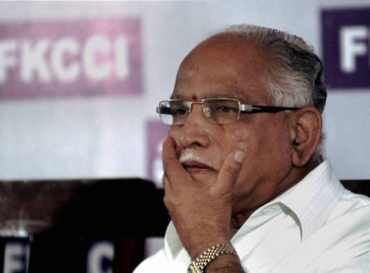 Bharatiya Janata Party Karnataka president B S Yeddyurappa has landed in a controversy after a video purportedly showing him telling a police official not to harass some Hindu youths in a murder case in Hassan district went viral.

“You have already arrested 14-15 Hindu youths. A few more are being tortured. Please don’t do such things in future. It won’t be nice, situation in Arsikere may get disturbed, peace may get disturbed,” he is seen speaking to Hassan district Superintendent of Police Rahul Kumar Shahapurwad in the video footage.

Congress spokesperson Brijesh Kalappa, who posted the video on Facebook, has accused Yeddyurappa of trying to ‘influence’ the course of investigation into the murder case.

Kalappa also charged that Yeddyurappa was giving a threat to the SP, who was only trying to do his job. As a public servant the BJP leader was doing a ‘wrong thing’.

“It is a clear indication that Yeddyurappa wants to influence the course of investigation,” he alleged.

Violence had erupted in Arsikere following the murder of 24 year-old Emanuel Varun, who was stabbed to death on May 29 with some shops being attacked in the fallout of the incident.

The video of the murder had gone viral.

Police said differences between two groups of youths had led to the murder and there was no communal angle to it.

According to police, Varun’s friend had differences with one of the arrested persons in the murder case regarding running of a gym in the town. When Varun and his friend raised the issue with another person, the latter’s friend allegedly stabbed him. 11 persons have been arrested in connection with the murder and another 13 over the violence that followed the crime.

Among those arrested, a few are said to be associated with Hindu groups.

“We have made all arrests based on the evidence available. We have the video footage of violent incidents in which the arrested accused participated,” the SP said.

A delegation of BJP leaders, led by member of legislative council Bhanu Prakash had met Shapurwad recently and complained that police had arrested a few innocent people in the case.