Victory of faith over facts: Owaisi on Ayodhya verdict

All India Majlis-e-Ittehadul Muslimeen president Asaduddin Owaisi on Saturday said the Supreme Court judgment on the Babri Masjid-Ramjanmabhoomi land dispute is a "victory of faith over facts" and suggested rejection of alternative five-acre plot given for construction of a mosque. 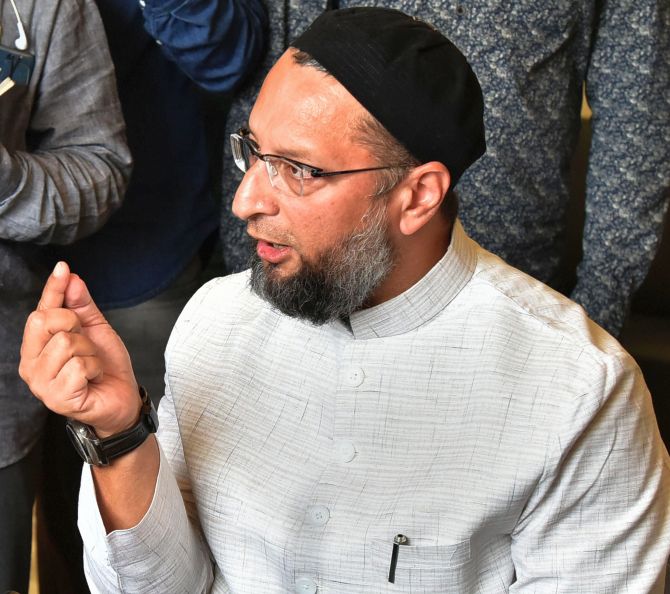 Owaisi, who expressed disappointment with the judgment, quoted former Chief Justice of India J S Verma that the "Supreme Court is supreme...and final but not infallible."

"This is a 'victory of faith over facts' judgement," he said.

On the apex court giving alternative five-acre plot to the Muslim side for construction of a mosque, Owaisi said the Muslim side was fighting for legal rights and does not need donation from anyone.

In his personal opinion, Owaisi said, the offer of five-acre plot to the Muslim side should be rejected.

"We don't need anyone's donation (of land)... There is no need to patronise us. Even today, if I beg on Hyderabad's roads, definitely people will give so much money that I will buy five acres in Uttar Pradesh," he said.

Asserting that there cannot be any compromise vis-- vis construction of a mosque, Owaisi, however, said he would go with the decision of the All India Muslim Personal Law Board.

Alleging the Sangh Parivar and the BJP are leading the country towards "Hindu Rashtra", he said "the people who demolished the Babri Masjid in 1992, the same people were asked to form a trust and start temple construction."

"Now, the Sangh Parivar and BJP will start from Ayodhya and NRC, Citizenship Amendment Bill... the BJP will use it," he said.

He questioned as to what would have been the Supreme Court's decision had the Babri Masjid not demolished in 1992 and idols were not placed in 1949.

He claimed that the disputed structure was "sacrificed" because of Sangh Parivar and conspiracy of the Congress.

"We keep saying to our future generations that there was a Masjid for 500 years and on 6th December, 1992, the Masjid was sacrificed due to Sangh Parivar and conspiracy of Congress in front of the whole world and they misled the Supreme Court," he said.

Quoting the apex court judgement, he said: "The court has agreed that, in the ASI report, there was no mention of temple (at the disputed site). Court has also said that we used to pray inside the Mosque. I don't understand the exercise of Article 142 of the Constitution by the Supreme Court. It is unusual. We are not satisfied with this.

Owaisi said he had the right to express his opinion that he is not satisified which cannot be termed as contempt of court.