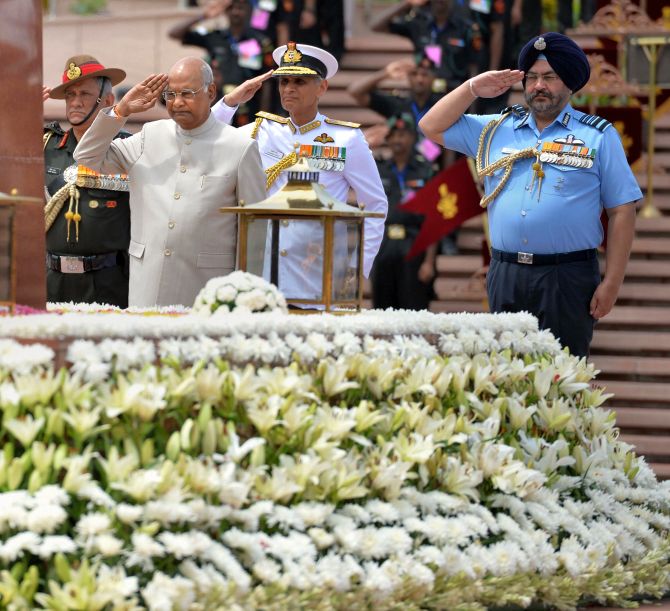 Military veterans as well as strategic and defence experts on Thursday hailed Prime Minister Narendra Modi's announcement of creating the post of Chief of Defence Staff, saying it was a long pending move that will help in greater integration of the three services.

Gen (retd) V P Malik, the former chief of the army who led the force during the Kargil conflict in 1999, described it as a "historic step" that will ensure better jointmanship and multi-disciplinary coordination.

"Thank you PM Modi for announcing historic step of institution of CDS. This step will make our national security more effective and more economical. It will ensure better jointmanship and multi-disciplinary coordination. Salute!" Malik tweeted.

Admiral (retd) Sunil Lanba, former navy chief and ex-chairman of the Chiefs of Staff Committee, said it is a great step, which was "long overdue".

"What had been worked out for the permanent chairman of Chiefs of Staffs, if the same role and responsibility are given to CDS, (then) there will be a greater level of integration both in planning and management of the (defence) budget," Lanba said.

Air Vice Marshal (retd) Manmohan Bahadur said one should wait for details of how the government plans to take forward the process of creation of CDS.

"The details are yet to be announced as that will determine inter-say responsibility of the CDS, the three service chiefs and the defence secretary. It also has to be known whether he will also be the operational head or would it be as envisaged by the Kargil review committee which said the CDS would not be the operational head. These vital details are awaited," Bahadur said.

In a landmark military reform, Modi, in his Independence Day speech, announced that the country will now have a CDS as head of the tri-services, a proposal pending since the Kargil conflict in 1999.

He will also act as a single-point military adviser to the prime minister and defence minister on key defence and strategic issues.

A high-level committee set up to examine the gaps in the country's security system in the wake of the Kargil war in 1999 had called for appointment of a Chief of Defence Staff.

A group of ministers analysing required reforms in the national security system had also favoured appointing a Chief of Defence Staff.

Lt. Gen. Syed Ata Hasnain, former military secretary, said: "The PM has made clear one nagging doubt that the CDS will be an appointment above the three service chiefs, making it the actual one point to render advice to the government."

Prof. Shirkant Paranjpe, former director of the Centre for Defence Studies, University of Pune, also welcomed the move, saying this will help in greater integration of the three services.

"The decision was being delayed due to lack of political will and also as the services feared creation of CDS would mean encroachment on their turf," said Paranjpe, who is a Research Fellow at Stellenbosch University, South Africa.