Vet could have been saved but cops wasted time: Victim's family

The Hyderabad Police played a "negative role" and "wasted precious time" which could have been used to save the life of a veterinarian who was brutally raped and murdered, her family members told the National Commission for Women on Saturday. 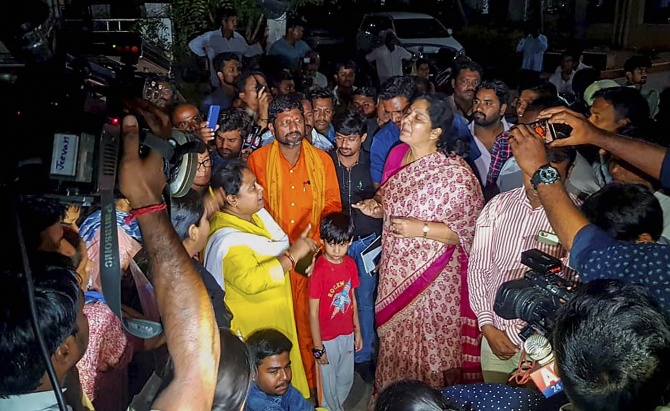 The NCW had sent an inquiry committee headed by a member of the panel to look into the alleged rape and murder, which has sparked a national outrage.

The charred body of the 25-year-old veterinary doctor was found on the outskirts of Hyderabad. She was raped and killed allegedly by four men, all lorry workers. The four accused were sent to judicial custody for 14 days on Saturday.

NCW chief Rekha Sharma said the family told NCW member Shyamal S Kunder that the police played a "negative role" in the case. Kunder said the family claimed that before filing the complaint, the police even levelled allegation that "she had eloped with someone", Sharma added.

A lot of time was wasted because the police were fighting over jurisdiction that in which police station the case should be registered, Sharma claimed.

She also slammed Telangana Home Minister Mohammed Mahmood Ali's remarks on the victim, saying such people do not deserve the position and they need to be sensitised.

Ali said had the victim called the police instead of calling her sister, "she could have been saved."

An NCW team visited the family of the veterinarian on Saturday. The family members told the team that police wasted "precious three-to-four hours" that could have been used to save her life, Sharma said.

"We are standing with the family of the victim. I will also go there (Hyderabad) and ensure police is probing the matter properly and that the matter is chargesheeted on time. We demand that the case be sent to fast-track court and justice is served at the earliest and the people responsible are hanged to death," Sharma told reporters.

The NCW, in its report, said prima facie it observed that police officials delayed taking action in this case.

"Victim's family was shunted between two police stations over the issue of jurisdiction," the NCW said in the report.

"Police came into action only the next day though the victim's family had reached out to them immediately after her cellphone was found switched off," it said in the report.

The NCW further claimed that the victim's family has still not been given any protection and there is no women investigating officer in the entire team probing the case.

"Police officials claim that the CCTV footage from the toll plaza is not clear, which is strange. The lorry driver and cleaner parked their vehicle on the roadside and they consumed alcohol in the vicinity of the toll plaza but the police didn't bother inquiring the reason for either. There was no police patrol around the area," the report said.

The NCW said it has given instruction to the DCP Cyberabad to get the CCTV cameras installed and checked at various locations in the city, particularly the toll plazas.

"The women's panel asked the police officials to be vigilant and provide designated areas for trucks and heavy vehicles and not let them loiter around in the city," the report said.