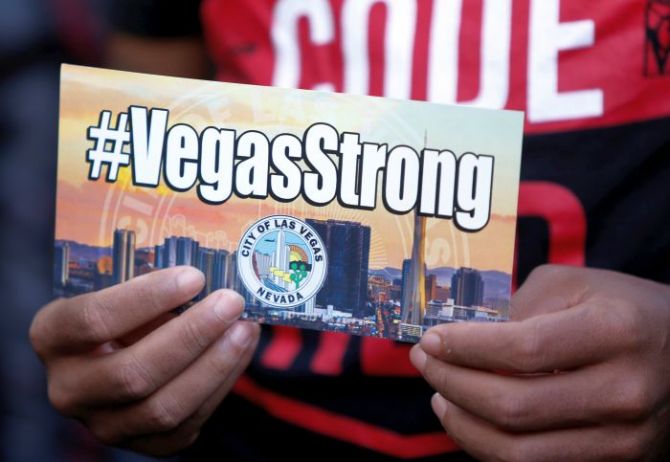 IMAGE: A man holds a sign with a VegasStrong hashtag during a prayer vigil, in honour of those affected by the shooting on the Las Vegas Strip. Photograph: Las Vegas Sun/Steve Marcus/Reuters

The Las Vegas massacre has triggered a debate on the controversial gun control legislation in the United States which has recorded one gun-related incident a day so far this year.

Nearly 12,000 people have been killed in gun violence as 273 mass shootings have occurred so far in the US in 2017, according to the Gun Violence Archive, a not-for-profit corporation that tracks gun-related violence in America.

On an average, more than 90 Americans lose their lives to gun violence every day, a daily toll of heartbreak and tragedy in communities across the US.

At least 59 people were killed and over 500 injured on Sunday night when a gunman opened fire during a music concert in Las Vegas, the deadliest in modern US history.

Experts believe that the incident, which US President Donald Trump termed as an “act of pure evil”, is unlikely to bridge the bitter differences between the pro- and anti-gun control law lobbies in the country.

Trump, who ran his campaign against any gun control laws, did not mention it in his two remarks on Monday even as he said it was “a very, very sad” day for him.

Responding to questions, White House Press Secretary Sarah Sanders said on Monday that it was a day for reflection and mourning and not to discuss political issues.

But senior Democratic leader Nancy Pelosi shot off a letter to House Speaker Paul Ryan over creation of a Standing Committee on gun violence and passage of a common-sense legislation on gun control.

“Congress has a moral duty to address this horrific and heartbreaking epidemic. Charged with the solemn duty to protect and defend the American people, we must respond to these tragedies with courage, unity and decisive action,” Congresswoman Pelosi said in the letter.

The Congress, she said, must pass the bipartisan King-Thompson legislation to strengthen the life-saving background checks that keep guns out of the wrong hands. “But this is only a first step,” she added.

Introduced in 2015, the King-Thompson bill seeks to expand the existing background check system to cover all commercial firearm sales, including those at gun shows, over the internet or in classified ads while providing reasonable exceptions for family and friend transfers.

“I urge you to create a Select Committee on Gun Violence to study and report back common-sense legislation to help end this crisis. The bipartisan committee would make recommendations to prevent unspeakable tragedies such as the mass shooting in Las Vegas and to restore confidence in the safety of our communities,” Pelosi said.

Indian-American Congresswoman Pramila Jayapal also made a passionate plea for common-sense gun control law, saying gun violence is a public health crisis that has claimed thousands of innocent lives and the Congress must do everything it can to address it.

In her speech on the floor of the US House of Representatives on Monday, Jayapal said the American people were tired of being outraged, sending thoughts and prayers, seeing men, women and children die “because the gun lobby does put profit over people”.

“That is not what our founders intended by the ‘right to bear arms’,” the first-time lawmaker from Washington State said, as she joined several of her Congressional colleagues calling for changes in gun control laws.

“With rights come responsibilities: the responsibility to stop gun sales loopholes, to enact protections that make sure our children and those with severe mental illnesses don’t have access to guns, to address funding for mental health, and to oppose any efforts to make it easier to purchase silencers,” Jayapal said.

The first ever Indian-American women elected to the House of Representatives said 87 per cent of gun owners and 74 per cent of non-resident aliens members support those common-sense solutions like criminal background checks.

Congresswoman Kathy Castor said, “Certainly, we can come together to pass common-sense safety requirements such as background checks and limits on civilian use of military-style weapons and to enforce the laws on the books.

“The sorrow that I and so many around the country feel for the innocent men and women whose lives were cruelly cut short by this heartless act of domestic terrorism is immeasurable”.

Congressman Earl Blumenauer said, “From Orlando to Roseburg, OR and now Las Vegas, the carnage has only continued. Thoughts and prayers will not stop future tragedy. Enough is enough. My hope is that sanity will prevail, and Republican leadership in Congress will muster up the courage to act.”

The right-wing -- and National Rifle Association -- messaging point that nothing could have been done to prevent the horrific attack in Las Vegas is just wrong, he said.

Over two years ago, he had released a comprehensive plan to deal with gun violence like the public health epidemic that it is, the lawmaker said, adding that the solutions should not be hard.

“Every day that we fail to act puts more innocent lives at risk. It is long past time to fix our gun laws. Congress has a moral responsibility to act and address the daily tragedy of gun violence in our communities,” he said.

Last week, he said, Republicans planned to vote on a bill that would loosen gun laws, instead of strengthening them.

In light of the tragedy in Las Vegas, and the ongoing tragedy of gun violence in America, this could not be more inappropriate. The American people deserve a vote on legislation that will curb gun violence, including reinstating an assault weapons ban and instituting new restrictions on gun trafficking, Carson said.

Congressman Alcee L Hastings said that more than 33,000 people will die from gun violence this year.

“With each new tragedy that occurs, those who stand in the way of legislation to address our country’s gun violence epidemic are increasingly culpable for its continuation,” he said.

No community should have to fear going to the movies, a concert, or dropping their child off at school, said Ami Bera, the three-term Congressman from California.

“In the wake of this tragedy, I hope we’ll all be able to take the time to look for the helpers and that each of us, in our own way, will seek to help our nation heal, move forward, and work to prevent similar tragedies,” Raja Krishnamoorthi, Democrat Congressman from 8th district Illinois, said. 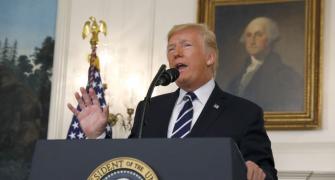 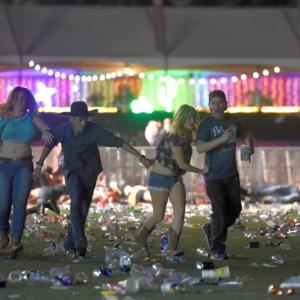