By Sharat Pradhan
January 01, 2011 19:57 IST
Investigation agencies have launched a hunt for a man who received a call from Mumbai, minutes before the December 7 Varanasi blast, which left two dead and 30 injured.

Two calls received by a person using the cellphone near Dashawamedh ghat in Varanasi are believed to have provided major leads to the National Investigation Agency and the Intelligence Bureau that are probing the attack, allegedly engineered by the terror outfit Indian Mujahideen.

The agencies were now trying to zero in on the owner of the cellphone to which these calls were made from the Bhendi Bazar area in Mumbai. While one call was made on December 6, the second one was made minutes before the deafening blast rocked Varanasi's Shitla Ghat while hundreds of devotees were performing the routine evening aarti on the banks of the Ganga.

While a special NIA team is camping in Varanasi, another team has flown down to Mumbai to track the caller, who could provide vital clues in the case.

All the calls made and received on December 7 through the telecom tower installed in vicinity of the blast site were scanned by investigators. "Only two calls were received on that cellphone, which was switched off soon after the blast," disclosed an IB sleuth.

"The SIM card was purchased from a shop in Mau district, barely 60 km from Varanasi, with a ration card bearing the name of Vijay Kumar was used as proof of address and identity. However, the address and the identity proof were fake," added the official.

The shopowner, who sold the SIM card, was quizzed by the Anti-Terrorism Squad, hoping to get some leads in the case, but in vain. However, investigators believe that the SIM card could help them crack the case. 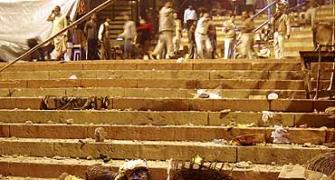 How Indian Mujahideen is trying to resurrect itself 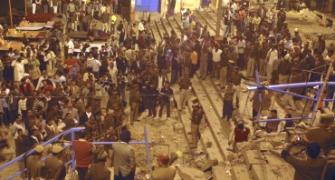 The men behind the Varanasi blast